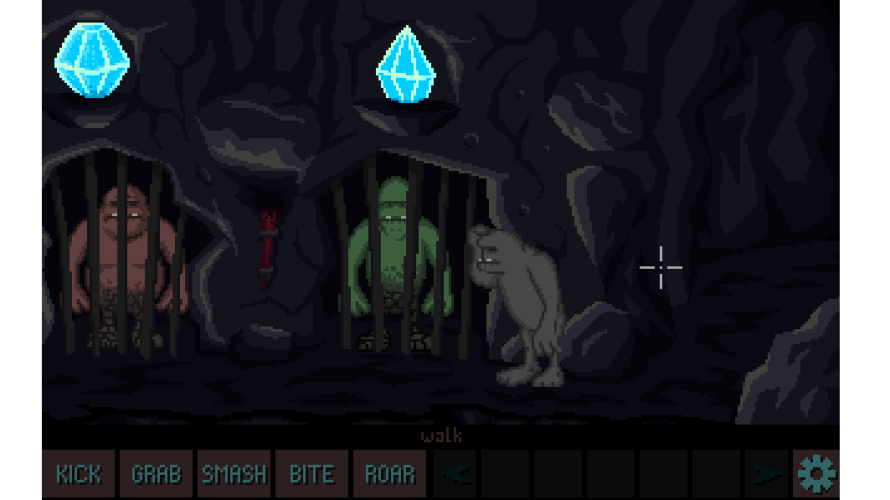 Whenever trolls are featured in popular media, be it video games, movies or books, they’re almost always portrayed as mindless brutes – savage antagonists, as it were. Well, that won’t be the case in Troll Song, as Team Disaster has taken a different approach with their upcoming adventure. Here, the focus will be on – believe it or not – a group of civilized, if somewhat simple-minded, group, and their struggle to survive.

Come late 2015 (if all goes well), players will be able to step into the shoes of Clod, a troll on a mission, determined to help his friends, create a future for an entire race and such. As you can probably tell from the above screenshot, Clod’s ability to interact with the environment is somewhat limited, to say the least. Doesn’t mean the puzzles, of which plenty have been promised, will be simplistic though, as I’m sure even complex brainteasers can be solved with “kick”, “grab”, “smash”, “bite” and “roar”. Maybe. We’ll see.

What is however certain, is that the game will feature a lovely pixellated art style and be fully voiced acted, to accompany the included “orchestral music score”. That’s right: voice acting; remember, civilized trolls, not mindless brutes!

Hm? Eager to take Troll Song for a spin, are ya? Well, I should hope so, but unfortunately… all that’s currently available is a tiny slice, cut from an early build (features missing, lower quality voice acting etc.). Still better than nothing, I’d say, while we wait for Q3 2015 to come around.