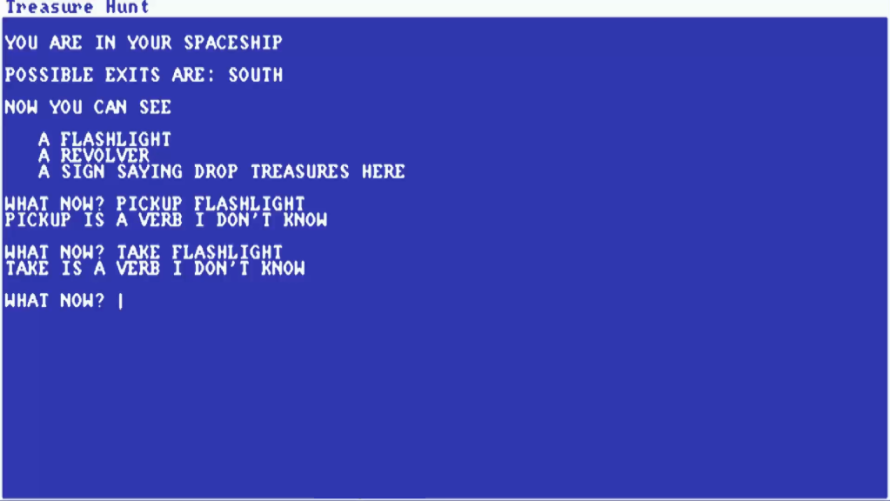 The creation of a treasure hunt of some sort is, quite frankly, a relatively simple task. Drawing, on the other hand? Not so much, and the fact that this here Treasure Hunt Jam focuses on entirely text-based games is a large part of why I opted for coverage as it lowers the barrier to participation significantly – without making any sacrifices along the way.

So, all you need to get started creating a treasure hunt text adventure game is… well, words. Words and one or more items, rooms, puzzles or challenges to ensure the acquisition of said item(s) won’t be as simple as walking up to and picking it/them up. That’s it. Oh right, you are restricted to Adventuron Classroom as far as the parser/engine for this particular game jam goes, so do keep that in mind. Fortunately, having spent a good 10-15 minutes with it, I’d say no matter your experience level with text-based game making, the process should be simple enough. Should you find yourself stuck, however, there’s always the documentation. I know, real men/women don’t read manuals, but it does beat banging your head against a wall (on top of being less painful).

Treasure hunt is a sub-genre of text-adventure in which the player must collect some objects that are considered treasure objects, and place them in a room that is known to be the treasure room.

But what about the contents? The items? The treasure itself? The puzzles? The room in which said treasure is to be placed for the game’s victory condition to trigger? Oh, you’re on your own there. Completely. Just kidding – the ‘Getting Started’ section on the jam website features a few potentially useful optional steps for those in need of general inspiration. Something those who have never even dabbled in the creation of a game like this would likely benefit from, so again, don’t make the mistake of trying to do it all without any guidance. Heck, there’s even a chunk of code to examine for when you’re ready to really get down to the nitty-gritty. Which you’ll have to at some point to avoid ending up with nothing to submit. Don’t let that dissuade you from trying, though. We all have to start somewhere, and this game jam is as good a place as any to get your feet wet.

If, on the other hand, you are already well-versed in the art of crafting complex text-based treasure hunts… well, gonna have to dial it back a bit this time around as entries should be limited to verb noun responses. None of those complex multi-line IKEA furniture construction commands here. On top of that, Adventuron’s treasure hunt mode is mandatory – with auto-re-describe enabled – and there should be a minimum of four locations and four treasures in the game. Overwhelmed? I really hope not, as those are just a sample of the rules, all of which can be found on the jam website. Which I would strongly recommend going over before starting (I know, common sense to do so, but you’d be surprised as to just how many tend to forget).

Last but not least, dates! Treasure Hunt Jam will begin on February 6th, concluding on March 5th. That’s it. For more details… well, hit the link below!