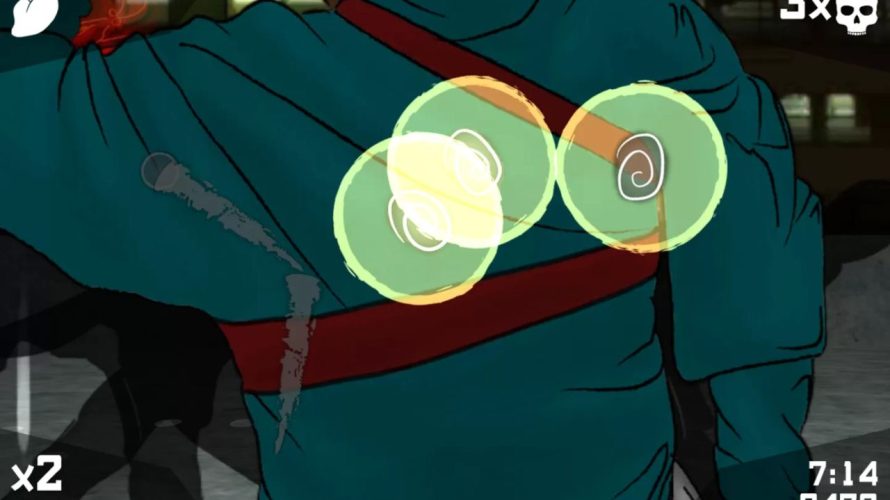 When a bunch of scumbags murders your mentor, it’s up to you and you alone to avenge his death by punishing those responsible. The time is ripe for an all-out assault on the killer’s clan, in which you’ll play the part of both judge, jury and executioner. Your weapon? The secret technique, Dim Mak (Touch of Death).

Not the most original back story, but a fitting premise for this particular game. As you can probably tell from the screenshot, this is neither a beat ’em up nor a fighter, which might surprise some, given the whole martial arts thing. Instead, what Sharkbomb Studios have created plays more like a cross between Fruit Ninja and Elite Beat Agents. Proper timing and precise gestures will be required to survive each encounter; and with perfect execution, “the hearts of your enemies will burst in their chests” (nasty stuff).

If Fruit Ninja is too tame for you, Touch of Death might just be the answer.

That said, those after a game with a proper ending should probably look elsewhere since Touch of Death is a score-based arcade experience (with online leaderboards), that continues until the player falls in battle. A bit odd, considering your reason for all this ass kicking is to avenge your fallen mentor, but that’s just the way it is. On the other hand, it is a mobile (tablet, actually) game, which means it’s a perfect fit for when you have a few minutes to kill (get it?), and feel like exploding the hearts of your enemies.

You’re only allowed one weapon for this revenge-fueled slaughter, so make your pick: either an iPad (iTunes) or Android (Google Play) tablet. Not that the choice matters much, because either way, those evil jerks won’t know what hit them until it’s too late. Tonight, justice will be served.

Touch of Death Trailer
Facebook Twitter LinkedIn Pinterest Tumblr WhatsApp Telegram E-mail
Previous article 'Dyna Boy' Impressions: Why Mine With a Pickaxe When You Have TNT?
Next article 'Shape of shades' Impressions: Break the Rules and Walk Through Walls to Escape