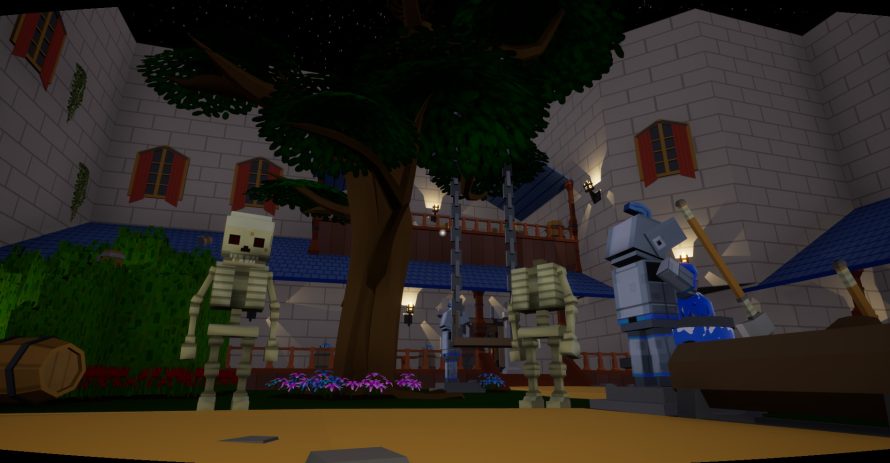 Ever messed about in an escape room with a friend, only to end up quite literally losing your head and/or impaled on spikes? Well, I should hope not, because that’ll certainly make To Be Headed Or Not To Be much less of an original experience. Also, just what kind of life do you endure with such madness?! Anyway, bring a friend, because it is dangerous to go alone as you attempt to… escape the mansion.

Although if the trailer below is any indication, you could also simply opt for sitting down with your friend and… yeah, grab a drink? Because why not? Why bother solving puzzles, avoiding traps, using your head as a bowling ball (wait, what?) and other tiresome chores, when you can just relax instead? Why indeed. Oh right, to escape the bloody mansion! Fleeing from captivity is after all the whole point of an escape room setup such as this. Unless drinki – no. Nope. Escape. One must escape. Two, actually, as there is no way to play this one by your lonesome.

Escape the mansion by cooperating and communicating with your teammate. This might prove to be the hardest challenge of this adventure but also the funniest game of “I told you so” you have played for a while.

Fortunately for those who, such as myself, are absolutely rubbish at video game puzzles, To Be Headed Or Not To Be does feature a hint system of sorts – one which can even be used to reveal the actual solution, should the need arise. Which it just might. Once the two participants are done getting sliced in half by spinning sawblades and other ‘environmental’ hazards. Oh, and don’t even get me started on the sequential button pressing bit in the trailer. Oh boy. That’s the kind of stuff that always gets me. Somehow. I can’t explain it. Just… trust me. It’s totally a thing.

What’s also a thing is that… well, I’m sure you’ve seen the screenshot atop this here article. But if not: you’ll both be playing the part of a skeleton. A bony, raggy, long-since-dead skeleton. Complete with a detachable head, apparently. And again, why not? It’s a video game. Forget about realism for 2-4 hours (which, incidentally, is the amount of time the game has been designed to last – for most) and just roll with it. Have a ball. Grab a drink. Just don’t forget to, you know, escape!

To Be Headed Or Not To Be is available on Steam, carrying a $7.99 price tag.

To Be Headed Or Not To Be - Trailer
Facebook Twitter LinkedIn Pinterest Tumblr WhatsApp Telegram E-mail
Previous article Have no Fear, the (Great) Old One is Here... to Spread Cheer in 'Cthulhu Saves Christmas'
Next article Kick Off 2020 With a "Misfits" Focused MAGS Competition