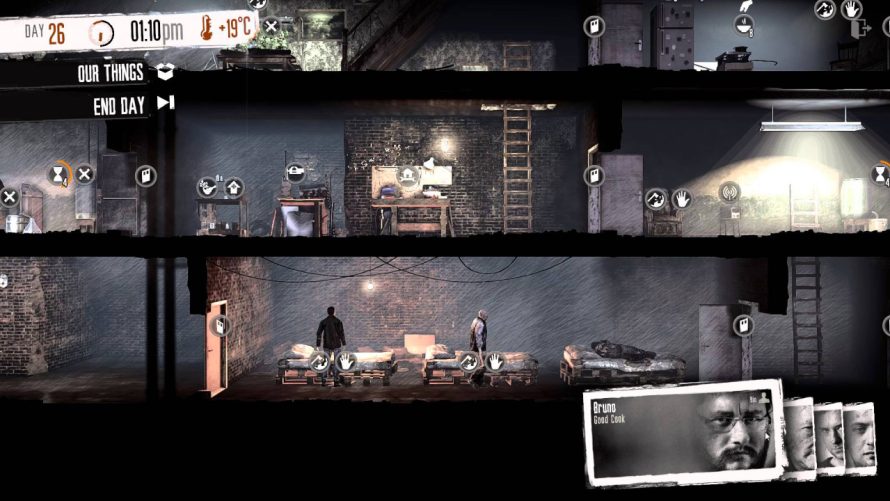 War is hell, as emphasized doubly in This War of Mine. Here, every waking minute is spent struggling… just to stay alive! That said, the game is a ton of fun, in spite of its overarching gloom and doom. And its latest update only makes it better, by adding something very important: mod tools. Everything from items and recipes to entire scenarios can now be hand-crafted and uploaded to Steam Workshop. Very groovy.

Now, for those not familiar with This War of Mine, it’s essentially a single-player 2D survival title, in which you’re tasked with keeping a handful of people safe, fed, healthy and so on. By no means an easy task, as random events are frequent, and you better believe they can be both a blessing and a curse, depending on what RNG decides. A visit could be that of a friendly trader, or perhaps a… metaphorical trojan horse? Hard to say, and tough decisions will have to be made along the way.

Try to protect everybody from your shelter or sacrifice some of them for longer-term survival. During war, there are no good or bad decisions; there is only survival. The sooner you realize that, the better.

Speaking of visits, those are also part of the ‘custom content’ craftable with the aforementioned mod tools, and best of all -- 11 bit studios aren’t done adding to that feature list either. But for now, we are ‘limited’ (if you can really call it that) to making scenarios, items, crafting recipes, weapons, and visits. Not entirely certain as to what is really missing from that list, although I’m sure we’ll see as soon as everything’s up and running, ready for the public and all that.

So… got any fun (as in, evil) scenario ideas waiting to be unleashed upon unsuspecting fans?

This War of Mine can be acquired from Steam (Windows, OS X, SteamOS, Linux) for $19.99 or your regional equivalent.