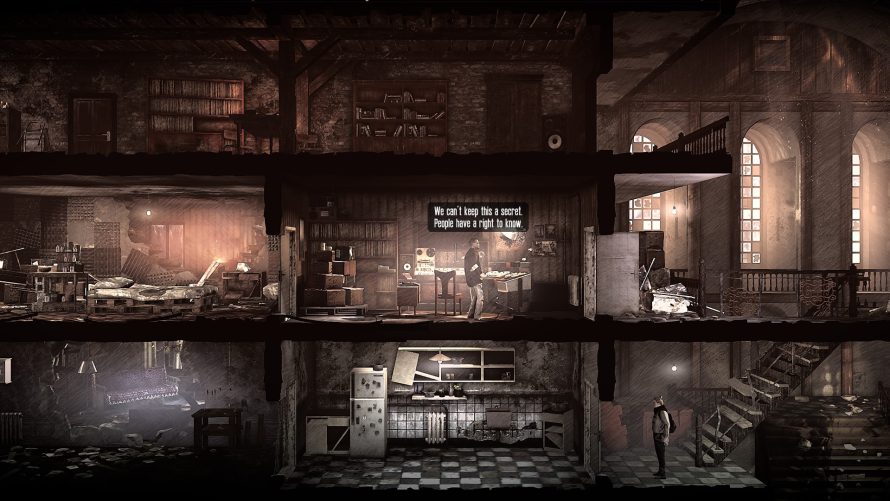 Lying is bad. Really bad. But in this upcoming second of three This War of Mine: Stories DLC, The Last Broadcast, just how valuable the truth is… will be put to the test. Everyone and everything has a price after all -- just gotta figure out what it is.

It’s been a while since Father’s Promise was released, and if this trend continues -- episode 1 and 2 both arriving on November 14, in 2017 and 2018 respectively -- it’ll be another year before everything promised in the season pass will be available. Three years, three pieces of DLC. People are not exactly pleased with this on Steam currently, hating big time on the DLC bundle. While I do see the reason for their outrage, we all know that video game content takes time to make. Sometimes longer than it should, but that’s just how the world turns. At least we’re getting it, ya know?

As a radio-operator broadcasting in a war-torn city, face the dilemma of whether there is a line beyond which the truth can be sacrificed. As Ira Glass once said: ‘In radio you have two tools. Sound and silence.’

That aside, fans can look forward to a fair chunk of groovy new content in The Last Broadcast: “different endings, new radio mechanics, new moral dilemmas about telling the truth that influences the world, new playable civilians and new sites of the city of Pogoren to visit”. Worth the wait? More details desired? First gets a ‘probably’ and the latter… a strong ‘definitely’.

(Thanks to Bloody Disgusting for the heads up.)

Note: This War of Mine: Stories is only available on Steam, GOG.com, and Humble.

This War of Mine: Stories - The Last Broadcast | Date Annoucement
Watch this video on YouTube.
Facebook Twitter LinkedIn Pinterest Tumblr WhatsApp Telegram E-mail
Previous article Old Will be New (and Epic): 'Ion Maiden' Out of Early Access and on Consoles in 2019
Next article Cut Corners Aggressively to be the Last Car Standing in Combat Racer 'Party Crashers'