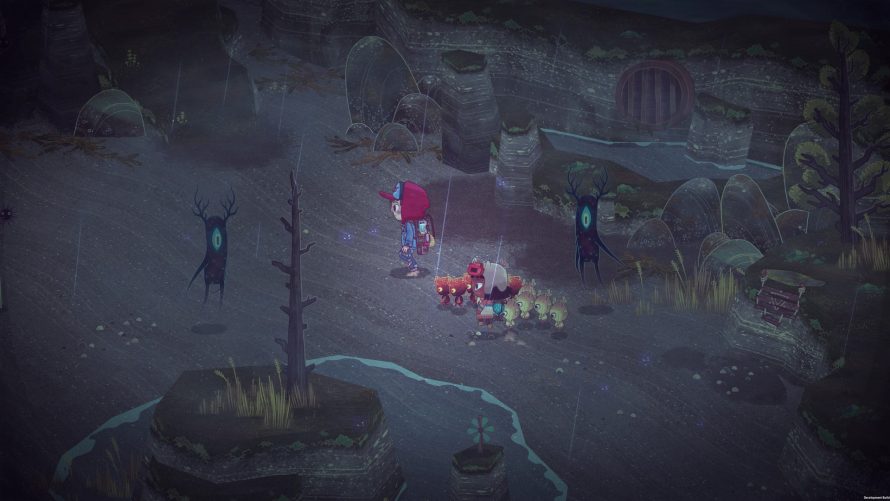 Nothing ventured, nothing gained, right? While a grand adventure starring magical creatures and other supernatural things was not exactly the reason for our two protagonists to brave the Deep Woods so much as a refuge from everyday life… here we are. Whether they’re better off in this mystical realm remains to be seen, however, as this forest is anything but safe for The Wild at Heart.

Danger aside, can we just take a moment to appreciate how lovely the art style in The Wild at Heart truly is? Even though every screenshot on its store page does give off the impression that daytime is shrouded in fog and that during the night, only those either brave, crazy, or both, are to wander about. In fact, the latter is downright confirmed, seeing how darkness is generally considered bad, perhaps even hazardous to one’s health, by the denizens of the Deep Woods. Better to just chill by a campfire until sunrise instead.

Chances are you’ll be so busy during the day that, come nightfall, a break might not be entirely unappealing. See, these tiny magical creatures known as Spritelings are all over the place, and you better believe they serve more than a single purpose: smashing, breaking, collecting, fighting, construction work – lots of use for that ever-expanding army of yours. As for exactly why you’d go about exploring a potentially dangerous place such as this, well, where’s your sense of adventure?

Unless I am misinterpreting something, the Deep Woods is not exactly a place one simply stumbles into by turning right instead of left during a brief trip out in the wilderness, so much as a remote region in which man has yet to tread. And in case that hadn’t been made clear already, do so with the utmost of caution, for no one knows what might lie within that cave up ahead? Danger? Treasure? Perhaps an ancient mystery that, when solved, is going to… well, you get the idea, surely. Collect, craft, explore, stay alive, and find out what life is like as… The Wild at Heart.

The Wild at Heart is available on Steam and Humble Store, carrying a $24.99 price tag. Soundtrack? Bandcamp.