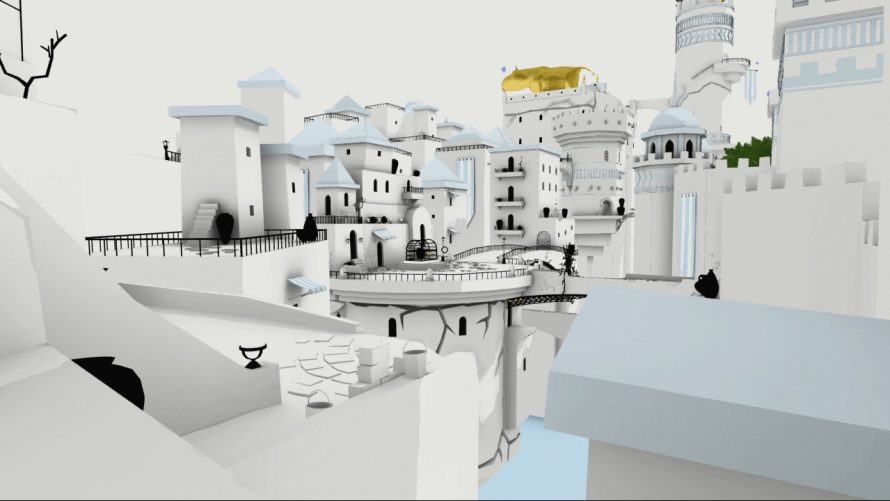 In the beginning, there was nothing. Then along came Monroe, a 10-year-old orphan, splatting paint everywhere, breathing life into an entire world. At least, that’s how I like to imagine the beginning of The Unfinished Swan, a wondrous experience that recently hit PC after eight years in Sony exclusivity.

While there is certainly more to it than what I just described, the bit about Monroe’s age and that splat painting plays a huge role in the game ? Facts. Now, as for exactly what triggered such a chain of events, well… “a swan that’s stepped out of an unfinished painting and wandered off into a surreal, storybook-inspired kingdom”. With that kind of setup, there’s really no telling how far beyond the boundaries of our reality the player has crossed – and that’s easily my favorite part.

Exploration in games tends to be tied to ‘what lies beyond the horizon’, the road ahead more or less appearing before players. This is where The Unfinished Swan does things a bit differently, as only by way of ‘painting’, are surrounding areas revealed. An interesting mechanic to say the least.

Even though I remain uncertain as to how each chapter will bring about “new ways to explore the world” (or much of anything else in the game), having not played it myself, I am still rather intrigued by the paint splattering aspect, and of course, its rather striking art style and music. Such a unique experience.

The Unfinished Swan is available on Steam, PlayStation 4, the App Store, and Epic Game Store.

THE UNFINISHED SWAN | Available Now on PC and App Store
Facebook Twitter LinkedIn Pinterest Tumblr WhatsApp Telegram E-mail
Previous article At a Glance: Finalists of the 2019 XYZZY Awards (Second Round Voting!)
Next article Shoot With Precision as Bullets Just Might 'Backfire' in This Arcade Shooter