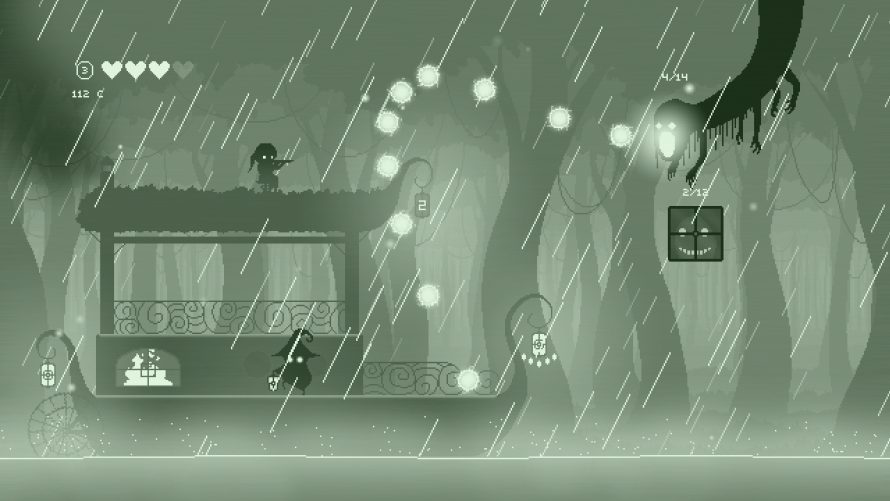 Bullet hell is a genre that has been around for what feels like forever, much like RPGs with turn-based combat. But… both in one game? Now that’s something you don’t see every day, and it’s also exactly what The Treehouse Man brings – along with some quite lovely monochromatic pixel art and a rather unsettling atmosphere.

I’m honestly not entirely certain as to what’s going on here, although the Steam page does make mention of “a horrible corruption” which has taken over the children’s home; which is just downright depressing, no matter how you feel about kids. That’s not all either: where the Treehouse Man has often proven reliable in their hour of need, this time, he has fallen oddly silent. Something must be amiss.

Learn the history of the children and unveil the forgotten truth behind the myth of the Treehouse Man.

This is where you, the player, come into the picture. Tasked with making the dangerous journey to the world tree – one which will take you through a blend of turn-based and real-time combat aplenty – you are now the last hope for your brothers and sisters, in this world where not everything is quite as it seems.

Fortunately, you’re not entirely alone in this hazardous endeavor, a hallowed boat (wait, what?) acting as equal means of transportation and weapon, featuring a variety of different arms, upgrades, and travel companions. Surely those are all the tools you’re going to need to survive what lies ahead, as you go rollin’ on this river, right? Surely.

Yeah right. Without a little tactical maneuvering – to dodge the bullet hell onslaught – and tactical prowess, well, you probably won’t get far. Danger lurks around every corner after all, and who knows – perhaps reaching the world tree is but the first of many obstacles to overcome? One way to find out…

The Treehouse Man can be acquired from Steam, for $9.99.