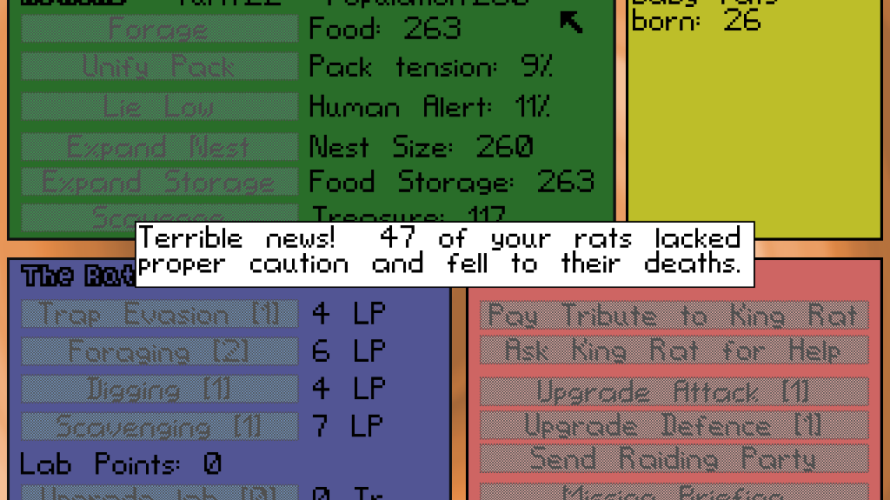 Making your way in the world today takes everything you got. Especially for the young rat in The Rat Pack who’s got naught but a commission from King Rat to work with. In fact, this fella is all too likely to bear witness as everyone around him gets eaten by the local cat, trampled by cattle, wiped out by disease or other ‘accidents’, as he attempts to move up to the big leagues, one colony at a time. There might be a light at the end of the tunnel, however. It is possible.

That said, I firmly believe that this game has the highest number of casualties of any I’ve played, ever. Over the course of my time with the beta, several thousand rats faded into oblivion. It was brutal. Absolutely brutal. BRUTAL I tell ya! Ahem. But that’s just how it is when you’re trying to survive, struggling not only with a dwindling supply of food but also natural disasters, tension levels, avoiding humans, expanding nest and storage alike… and that’s just the early missions.

Fortunately, the entire thing is turn-based, giving the player all the time in the world to weigh his/her options before deciding what to do next. A feature you’ll come to appreciate almost immediately, as no matter what you decide to do, chances are, population levels will decrease. Even more so if you’re running low on food, tension levels are running high, or other fun things. Oh, and you’ll soon find yourself managing The Rat Lab in order to fulfill mission criteria – on top of everything else! Did I mention how it’s not easy being a rat? Because it really isn’t. Not in the slightest.

Between foraging for food, expanding, maintaining tension/human awareness levels, you’ve certainly got enough to manage each turn. Throw in scavenging for treasure to climb tech levels and boy does things ever start to get complex. You do have the option of spending Lab Points to improve how much food is acquired with each turn spent foraging, however, how large an expansion is made with each attempt at digging, and other fun things, making this addition a blessing more than a curse; even if it does take away from doing anything else that turn. 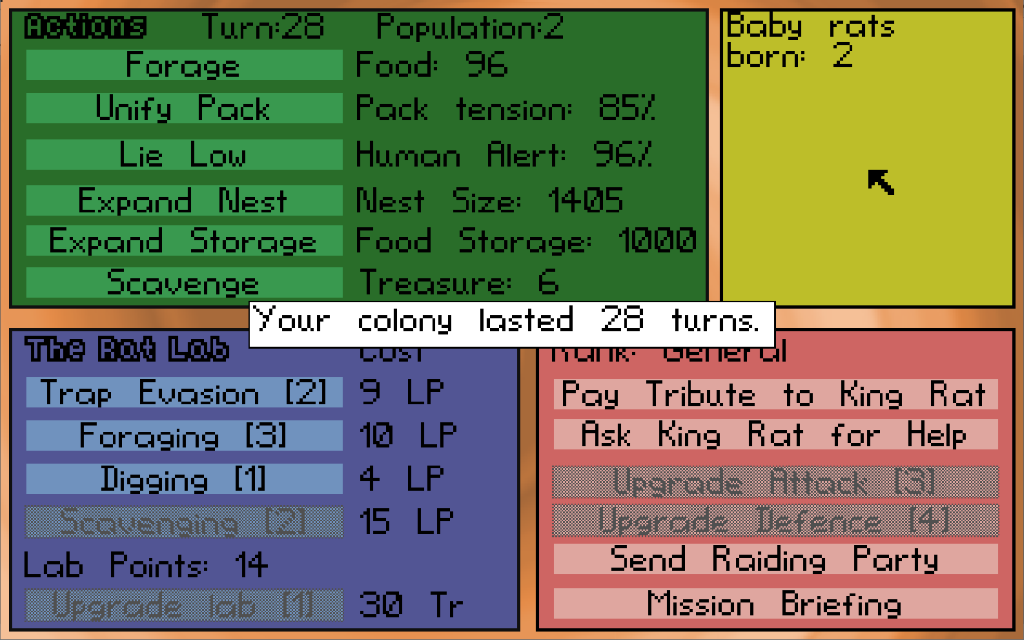 Ah, and then, much later in the game, there are tributes to pay, wars to wage, and an actual defense to establish. Phew. At this point, my head was spinning more than a little, having finally wrapped my brain around colony management and technology acquisitions, and now I had to manage an army on top of donating to King Rat? Yeah.

Quite a few ways for your colony to get into trouble, to say the least, and oh so very few to actually tilt the odds in your favor. Too high a population will attract humans, too low a food supply will increase tension, rats will get killed while waging war against other colonies, and… randomly. I mean, at one point a bunch decided to act like lemmings, throwing caution to the wind and basically committing suicide. It did make me chuckle, even if I lost a sizeable chunk of my colony to said ‘event’. Just one of many like it too, and fortunately, some are quite favorable. Most weren’t in my case though. Roll of the dice, ya know?

The Rat Pack (OBT) is available on itch.io.