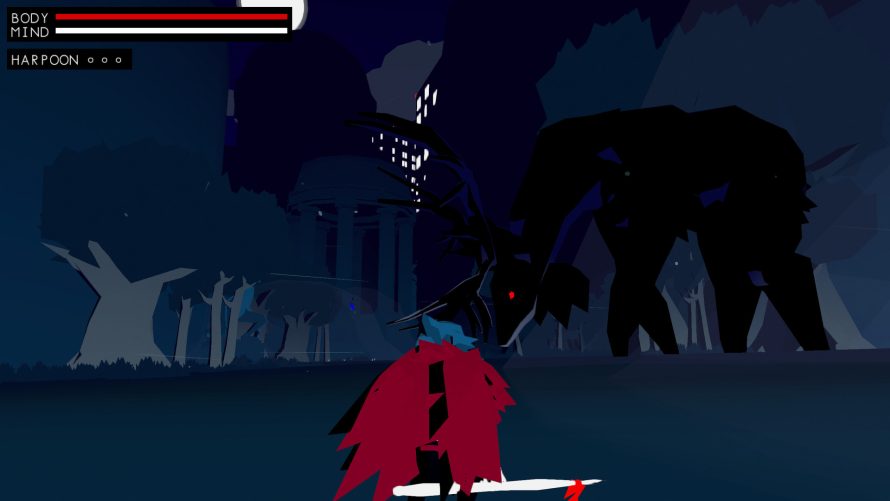 Were I to describe The Godbeast in a single word, it would be ‘stylish’. Two? ‘Stylish’ and ‘mysterious’. See, while a lot is revealed in the game’s description and its trailer, there are still many things we do not know about its world -- or even its protagonist, Ysengrim. How is he driving that motorcycle? Where did he get that spear from, and how is he able to climb those terrifying beasts to then stab away at them? At least we know why he’s doing it: to avenge the murder of the king! Oh, and there’s a full moon tonight.

Here’s another random thought: is it just me, or does The Godbeast look heavily inspired by the likes of Suda51’s killer7? At least in some parts. In other, I’d say the developer played a lot more Shadow of the Colossus, climbing all over giant beasts to reach their weak points. Whatever the case, there shall be no rest for the wicked until Ysengrim has slain every last Godbeast, avenging his father in the process. What, did I forget to mention he has royal blood in his veins? Yup. Not sure why he was exiled though. Perhaps because of his lineage? Perhaps.

Explore a mysterious and atmospheric City, with the ominous full moon in the night sky. Find action as well as rest in the dark shadows of the skyscrapers and the melancholic solitude of old forests.

Oh, and unfortunately for our ill-fated protagonist, and everyone else suffering in this dark and sinister world, the Godbeasts are only the first step. Once they have been slain, the Council of the Hunt will soon follow, for only then shall the City streets be freed from this… eternal nightmare!

The Godbeast is available on Steam, carrying a $9.99 price tag.