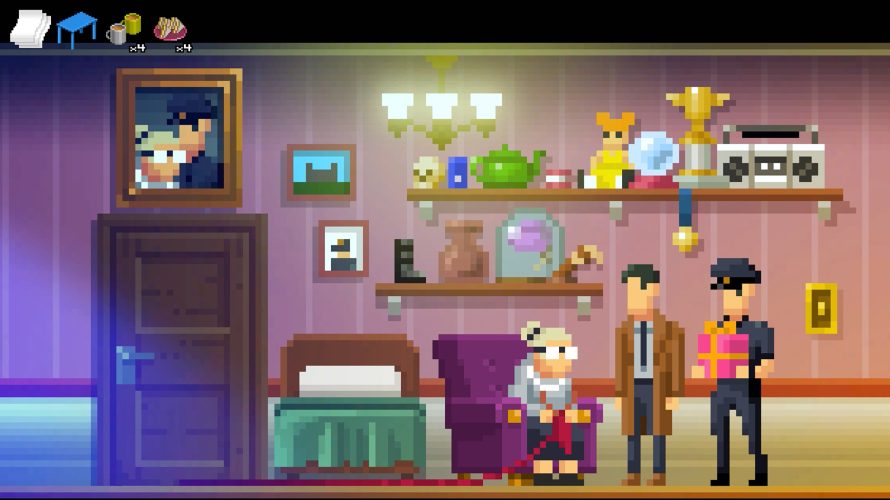 Something’s not quite right in The Darkside Detective: A Fumble in the Dark‘s Twin Lakes. Supposedly, it’s in fact very much a… cursed city. On a level that’ll make things go bump in the night, and yet at the same time, not quite so much that demons are emerging from hell gates across town. Somewhere in the middle, which means it’s time for Detective Francis McQueen to spring into action. Again.

After taking care of that, the fun can begin for real, six stand-alone cases taking the duo to a carnival (oh boy, clowns), the local retirement home (oh boy, old people), an amateur wrestling circuit (oh boy…), and even faraway Ireland (wait, what?). All in an attempt at keeping the Darkside at bay. Don’t know about you, but I’m starting to suspect this is the kind of supernatural that can’t be permanently removed.

That said, this would also mean there are more cases for McQueen and Dooley to solve, and as such, perhaps a third The Darkside Detective game? Certainly wouldn’t be a bad thing, but for now, there are old people, wrestlers, and even a floating bed or two to deal with. Welcome back to the cursed city of Twin Lakes.

The Darkside Detective: A Fumble in the Dark is available on Steam, GOG.com, Switch, Xbox One (and Series X), Stadia, Game Jolt, and Utomik.

The Darkside Detective: A Fumble in the Dark | Launch Trailer
Facebook Twitter LinkedIn Pinterest Tumblr WhatsApp Telegram E-mail
Previous article Return to the Childhood Home of a Struggling Writer in 'Forgotten Fields'
Next article Cloudy With a Chance of Mischief: It's Time to 'Rain on Your Parade'