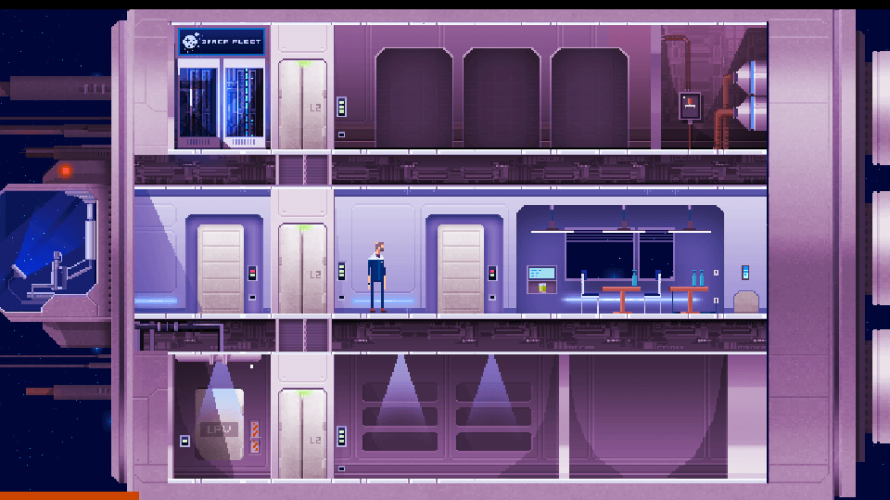 In the 23rd century, mankind has long since expanded its territorial claim into the vast depths of space, and as such, life’s pretty darn good for The Captain‘s protagonist, captain Welmu. Or at least it used to be until a routine mission goes wrong, poor Welmu suddenly waking up in uncharted territory, far away from home. Oh my. Time to point, click, be the best captain ever, and… find a way back!

Managing a starship is one thing, but keeping your sanity while also traversing numerous light-years of who-knows-what? Yeah. That’s another matter entirely, and one full of decisions not to be taken lightly. See, choosing to piss off a particular alien race may not be the wisest course of action, as the lot may have allies lurking a few asteroids over. Or maybe that planet you’ve just set a course for is actually rather toxic. No one said it would be easy, but hopefully attempting to steer clear of danger on this grand adventure will at least be entertaining.

Oh and before I forget: you’ll also be in charge of more tactical aspects, the likes of fuel levels, finances, when to allocate resources to research and when they’re better off beefing up your guns for future encounters. Because there will be encounters. Maybe even with your crew if words are chosen poorly. Who knows? Do remember that your main priority is getting home safely however before you end up in the middle of a month-long battle with a strange species no one’s even heard of before. Just saying.

Being inspired by TV shows such as Star Trek the Next Generation we set out to create a universe where you as The Captain have to make hard decisions concerning your and others survival and progress. You will have to weigh your needs against others, solve problems and fight battles. You can also enjoy the pure pleasure of exploration.

But before any of that good stuff can happen, The Captain is still in need of funding. Crowdfunding. Of the Kickstarter kind. And with $1,219 of $36,852 pledged, those 22 remaining days are going to have to count for quite a bit. Then again, 22 days – plenty of time! Right? Right. In case you aren’t convinced of its worth yet, a playable demo is available for sampling the goods, as it were. Ah, speaking of goods – $9’ll net ya a copy of the game come March 2017, for either Windows or OS X. What, Steam? Greenlight first… captain.