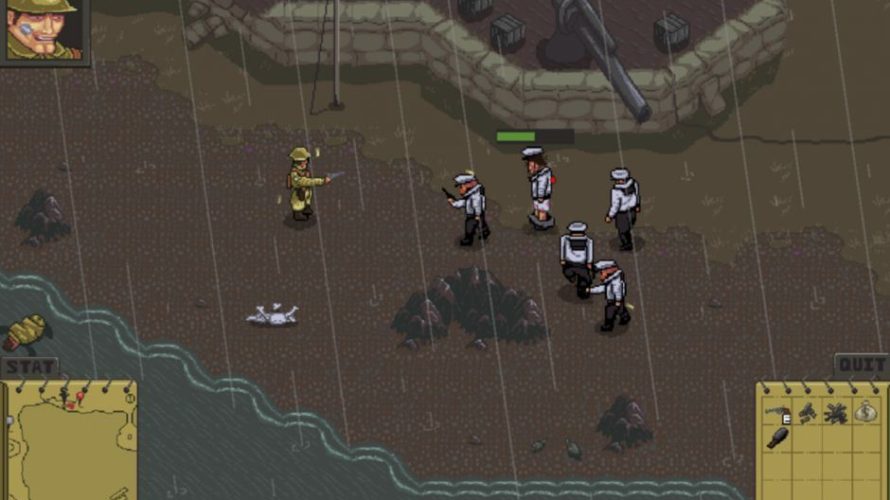 War is hell, they say, and generally speaking, it really is. But in Super Trench Attack, the entire concept certainly takes a turn for the far less serious. Zany scientists, crazy over-the-top acting, quirky foes, and goofy death cries all make for a war that’s bound to provide a chuckle or two. I know how strange that sounds, but… video game, ya know?

As a brand new recruit in The Green Army, you’ll be dealing with all kinds of crap. I’m not exaggerating: you’re the new guy, so you get to deal with things no one else wants to do. Simple as that. Actually, I’m just kidding. Following a trip through the training grounds, you’re immediately sent into enemy territory, tasked with blasting bad guys and making stuff go kaboom! Ah, the life of a soldier.

Navigating the battlefield is a simple affair: WASD moves your character around, left-clicking either shoot an enemy or interacts with something/someone while right-clicking reloads your current weapon. Courtesy of the isometric view, headshots are not only possible but also incredibly lethal; foot shots on the other hand… well, they’re more for comical relief.

While the combat itself is fairly straight-forward, keeping track of the action can be a bit troublesome, thanks to an oddly designed camera. See, unlike what one might think based on screenshots, it’s actually entirely possible to pan the view ever so slightly – something that’ll likely take some getting used to. I’d rather have the screen scroll when my character passed a certain point, but alas, that’s not how it is here. Wasn’t so bad that it got me killed though, so there’s that. 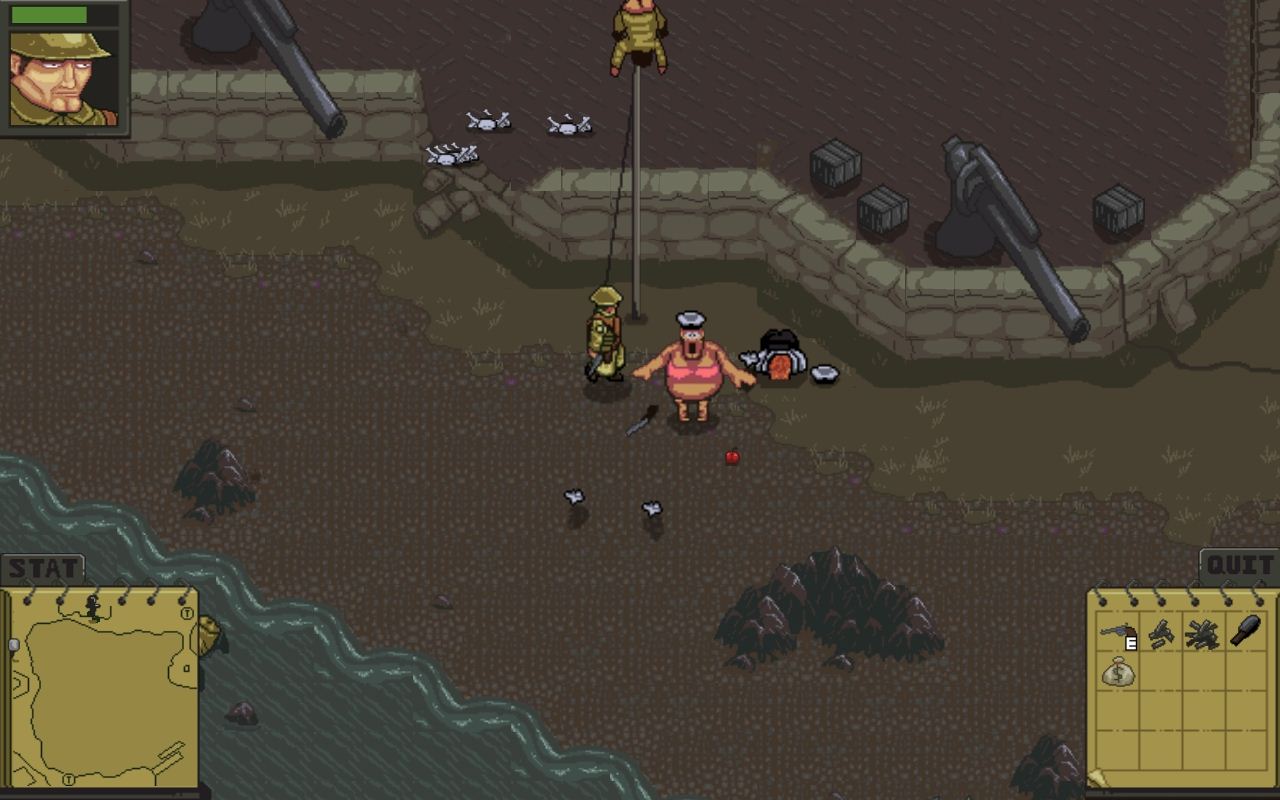 Same can definitely be said about the opposing side, as I’m hesitant to call the AI overly bright or aware of their surroundings. It was not uncommon for me to approach several soldiers and start shooting, managing to take out several before they had a chance to retaliate… guess I’m just one helluva stealthy fella? Whatever the case, those bastards sure were a varied bunch, bringing all kinds of crazy: machinegunners, mortar units, regular grunts and even monkeys all joined the fray at one point or another.

Suffice to say, The Black Army’s completely off its rocker, but that goes for pretty much everything about Super Trench Attack, really. Between the witty/sarcastic dialogue, cheesy battle cries and slicing the clothes of a near-death enemy to uncover a pink underwear fetish, the entire thing is full of tongue-in-cheek stuff. Might be a tad much for some, but I’d say it’s just the right amount of silly. 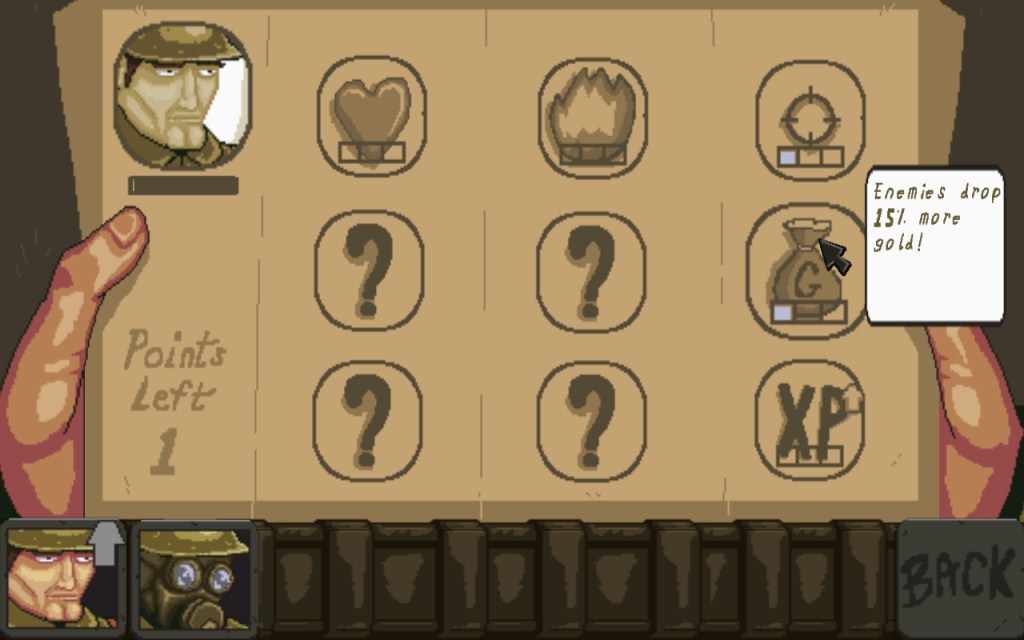 When you’re not busy kicking ass, taking names and mocking the situation, there’s still plenty to do. For improved combat efficiency, upgrading your weapons is a must and it goes without saying that your ammo supplies need to be kept in check. Every now and then you’ll also be able to ‘define’ your soldier, by allocating stat points, even if the ‘talent tree’ isn’t overly complex, believe me, some additional damage dealing capacity or extra health will come in handy. War is war after all, even if The Black Army rarely poses any kind of serious threat.

In spite of that, they did still manage to drain my health completely several times. This mostly happened during boss battles and when we were vastly outnumbered, both of which weren’t exactly common occurrences, yet it did make me notice something incredibly annoying. Generally speaking, the checkpoint system is just fine, but it has one major flaw: your inventory (ammunition, health kits, etc.) is not reset, while every enemy in the nearby vicinity is. 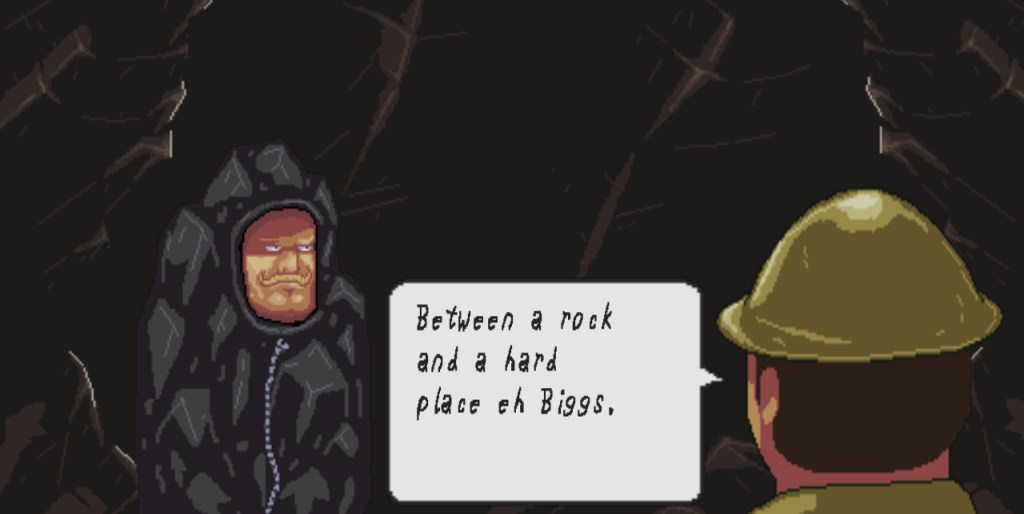 Fortunately, that’s the only downright frustrating part of an otherwise entertaining and lighthearted take on the first World War. With stylish visuals, over-the-top comedy, varied weapons, goofy plot and a base unlike any other, there’s plenty to like and little to frown at here. Apart from the checkpoint issue, which I’m hoping will be dealt with, this one’s an easy recommendation.

Super Trench Attack is available for Windows from the official website ($9.99, although it’s currently 50% off) and Desura ($8.99), without any DRM. Want it on Steam? Then help get it through Greenlight!