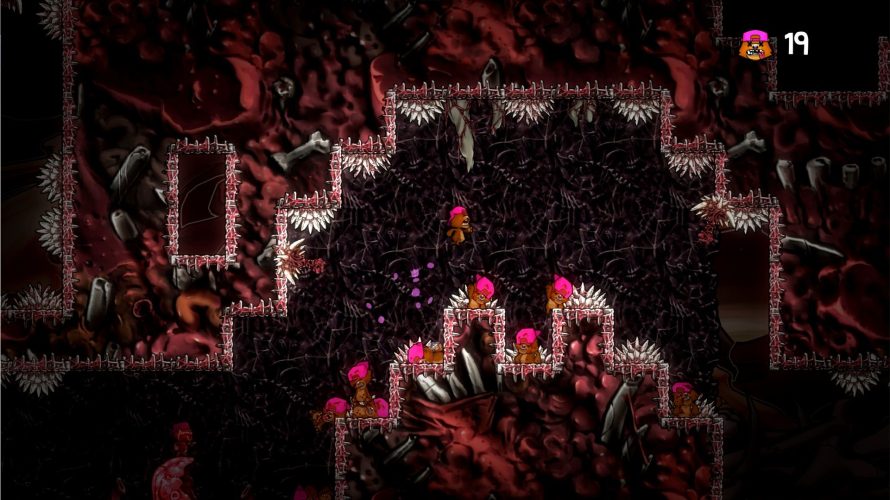 If there’s one guarantee in Super Rude Bear Resurrection, it’s that the game will kill its protagonist sooner or later, forcing a ‘minor’ setback. Thing is though, dying is surprisingly beneficial here, seeing how your corpses, well, they actually stick around. Oh, and you can use them as platforms or literal meat shields, should you feel the need to. Which you will unless you’re incredibly skilled at fast-paced 2D platforming…

I mean, you may be a bad-ass British time-traveling gangsta bear, but that doesn’t mean you get to walk across deadly spikes. Unless of course, you’ve already died on them, at which point, something something stepping stone corpse, ya know? In a way, it’s actually kinda… incredibly… disturbing. Even if it is your own body (bodies?), you are still using the dead as a means of progression in your quest to defeat The Wizard. Yup. Definitely sticking with ‘disturbing’ there.

That said, it does look like a blast to play, and courtesy of its rather unique mechanic, I’d wager this is a ‘hardcore’ platformer that anyone should be able to beat. Might end up with a couple of thousand deaths to build a safe path through it all, but hey, if that’s what it takes. Alternatively, you could always opt for the crazier route, turning off corpses and checkpoints in an attempt at beating the entire game without dying. Ever. Good luck with that.

Alternatively, there’s always ye olde speedrunning? Super Rude Bear Resurrection was built with such a feat in mind after all, with everything from Practice Mode to ghosts and something called ‘RNG toggle’. Which sounds good to me, as I’m sure the game will screw players over plenty without RNG also being part of the equation. Unfair is still fair in my books, so long as very little is left to chance.

Now, what say ya pay medieval England a visit and take care of The Wizard, once and for all?

Super Rude Bear Resurrection is available from Steam, Humble, as well as for PlayStation 4, Xbox One, carrying a $14.99 price tag.