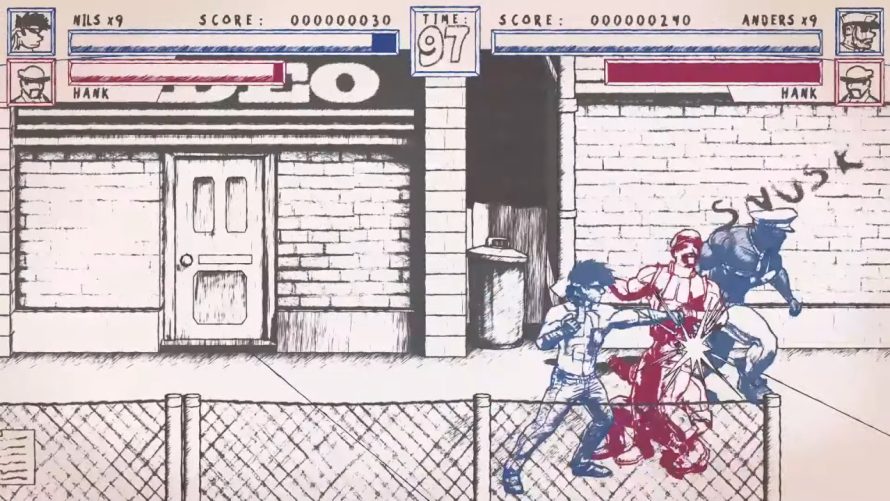 Beat ’em up. A genre that feels like it’s been around… forever. Which it kinda has, and not just from big shots like SEGA (Streets of Rage), Technōs Japan (Double Dragon), and CAPCOM (Final Fight), either. Indie developers have made their mark on the genre too, with Wulverblade, River City Girls, Zeno Clash, Furi, and… so many others. Few have been as stylish as Bertil Hörberg’s upcoming Super Punch Patrol, however.

I mean, just look at that screenshot, and tell me you don’t absolutely love the way everything looks. Reminds me a lot of Gunman Clive, actually, which is hardly all that surprising seeing how they’re from the same developer. Even so, never quite imagined I’d see its visual style applied to a beat ’em up, yet here we are, purple-/pink-ish bad guys, blue good guys. Easy to tell apart as Anders Punch, Nils Snyting and Selena Snyting delivers an absolutely relentless smackdown to criminals on the streets of… uh… wherever Super Punch Patrol takes place. Love it.

That said, one of them will unfortunately have to sit this one out, as co-op is limited to two players. Should be more than enough to fight crime and look good while doing it, though, complete with flashy special moves and… unlockable costumes! What, friendly fire? Oh, I do certainly hope so, as it is an undeniable genre staple, but we’ll just have to wait and see.