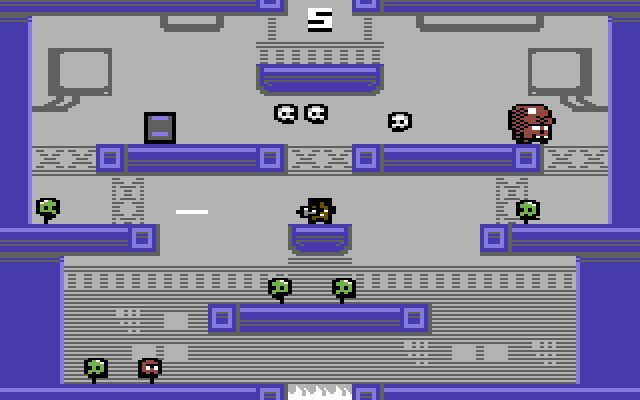 Wow. Didn’t think ye ole Commodore 64 was still alive and kicking. Yet here we are, with Super Crate Box turned 8-bit and ported to that very machine, under the name Super Bread Box!

I know, I know. It sounds crazy, but I’m not pulling your leg and yes, it is an official port, crafted by Paul Koller and co-published by RGCD along with the creator of Super Crate Box, Vlambeer. So, still believe I’m nuts? Well, you wouldn’t be wrong and some might say the same about porting an explosive indie classic like Super Crate Box to an ancient platform like the Commodore 64. I mean, really, who still has one of those things? Oh right, emulation.

For those not familiar with Super Crate Box, it’s a 2D single-screen action title with boxes. Lots of boxes. And weapons. Lots of weapons. Your goal? To kill everything in sight, picking up aforementioned boxes as you go along. What makes this so much fun is that every time you grab one of these tiny crates, your current weapon gets replaced by something else, randomly picked! Don’t even think about trying to avoid the boxes either, as these are the only way you’ll be able to not only increase your score but also unlock new levels along with other goodies.

But that’s the original. Surely no one could fit all that into such, well, limited hardware? Oh, ye of little faith. Not only is Super Bread Box going to be every bit as chaotic as Super Crate Box, it’ll also feature exclusive content! Three new levels and three new characters, to be exact, and… oh my – ONLINE SCORES?! Oh. Darn. Thought they were taking the C64 online, but no. You’ll have to submit the code on the website. The competitive nature remains though, as email notifications are available for if/when someone collects more bread boxes than you. Get it? C64? Bread box? Good.

So, one, two or three? If, like me, you’re without an actual C64, don’t worry. While the game is available in cartridge form, the (noticeably cheaper) downloadable version is emulation ready. Heck, it even comes bundled with VICE, ensuring that everything you need to fire up Super Bread Box and start collecting bread boxes is included. Alternatively, there’s the free ‘proof of concept demo’, along with the soundtrack; I’d recommend the full version though.