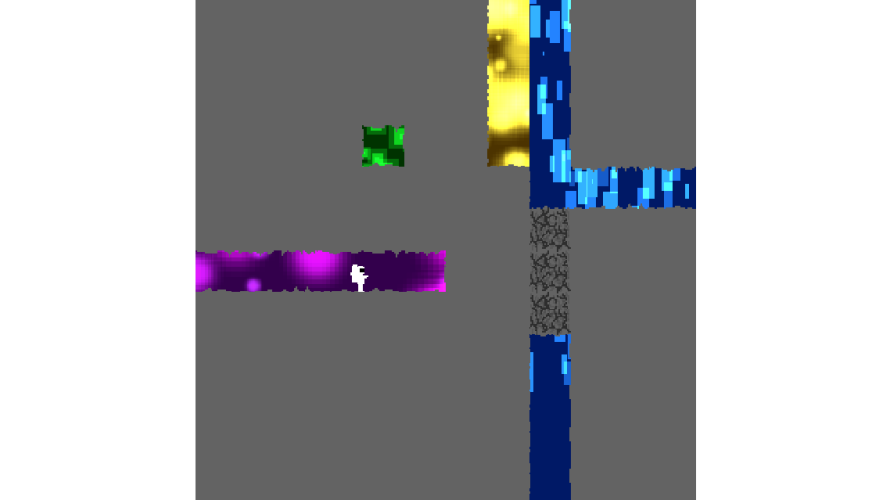 What’s a lone astronaut to do, having crash-landed on an uncharted planet with naught but a meager laser gun? Why, go exploring, of course! Won’t get far without learning about the environment first though, as different each color represent a specific type of material, which – as you’ve likely guessed – reacts differently. So get to shootin’, eh?

After playing for a good bit, I did get to wondering exactly why he/she crashed right then and there? The game never reveals anything though. No back story, dialogue, nothing. Then again, it was created for the Ludum Dare 29 competition, and as such, Ian MacLarty had less than 48 hours to put it all together. Ain’t much when ya gotta design puzzle-y areas, code jetpack physics, AND take it for a test run or two.

Be careful where you point that laser gun!

Ah, speaking of testing, during my time playing, I actually managed to break the game more than once, leaving the playing area behind, only to reenter it briefly before exiting again. Odd, but hey, that’s what happens when I get to play a game which gives me the power to manipulate the environment! Some colored grew rocks upwards when shot, while other multiplied, and then there were those which… actually, I think the rest should be experienced, really, instead of me spoiling the fun of discovery.

As such, anyone who feels like scratching that planetary exploration itch with a side of puzzle, can grab Substratum from its Ludum Dare 29 page, Itch.io, or GameJolt. Now off you go, oh brave astronaut!

Facebook Twitter LinkedIn Pinterest Tumblr WhatsApp Telegram E-mail
Previous article The Greenlight Groove: 'Solstice', 'We Slay Monsters' and More
Next article 'Path of Exile's 'Ambush' and 'Invasion' Leagues Are Over, Yet Not Quite Gone