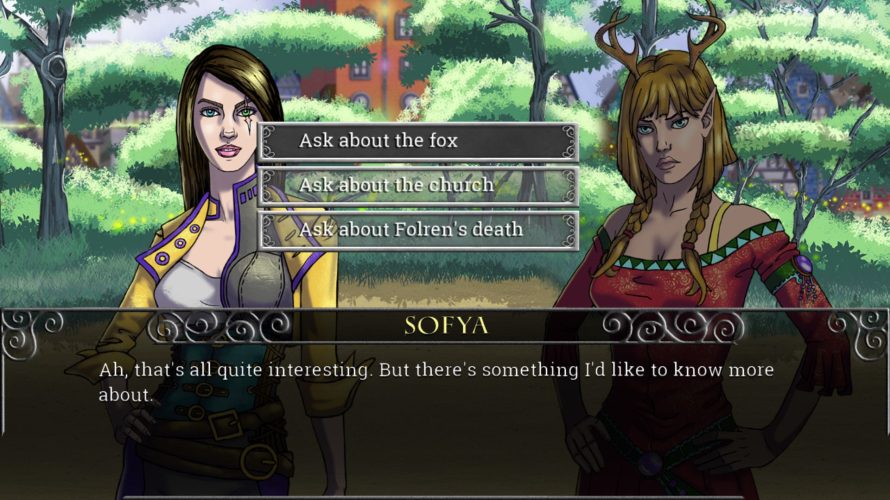 This time the spotlight will be shining on Echoes of the Fey: The Fox’s Trail, a detective-driven visual novel of mystery and intrigue. Let’s help it escape Greenlight limbo, eh?

Play as Sofya Rykov, a private investigator with a secret of her own: unstable magic powers she uses to solve her cases. In “The Fox’s Trail”, Sofya is hired to track down a missing Leshin with connections to the Human resistance during the occupation. Investigate how you prefer, with over 100 choice points throughout the story. Some will improve your relationship with the characters. Others will provide you critical information. And some will change the fate of the people you will come to know.

Magic? Ha! Sherlock Holmes got by fine without magi – uh, right. Anyway, that whole bit about “unstable magic powers” does have me a bit worried, although also mildly amused, as it’ll likely spice things up Sofya’s detective work. That said, and on a more serious note, one had best hope things do actually go according to plan, or the missing Leshin (Elves, in Oraz) will remain forever so. And with the Human / Leshin war long over, no one wants that. Or maybe some do? I mean, people -- no matter their race -- don’t exactly go missing without proper reason or outside involvement; generally speaking, anyway. Usually some third party is involved, and I have a feeling that’s also the case here. Cue dramatic music and unleash the… fox?

So riddle me this, dear reader: why do YOU think Echoes of the Fey: The Fox’s Trail still hasn’t made it through Greenlight? The game won’t be out until sometime this summer, but even so -- how about visiting its Greenlight page and handing over a ‘yes’ if you like what you see? Remember: your vote could make all the difference!