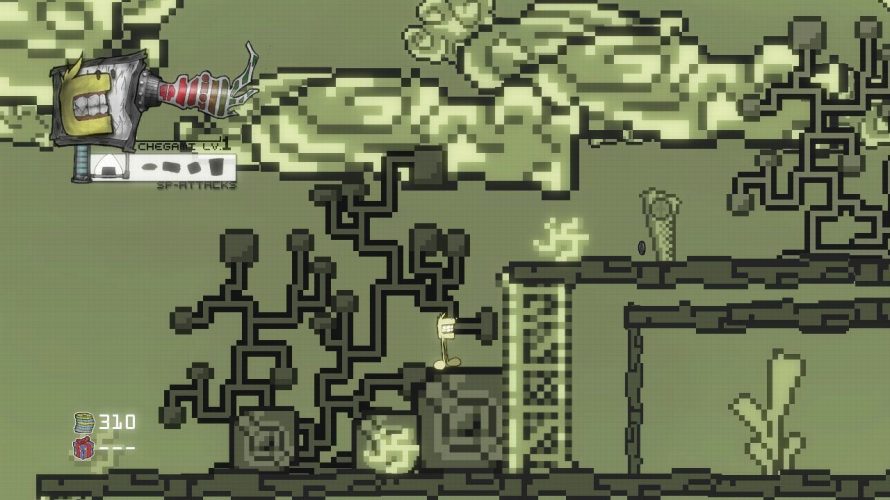 This time the spotlight will be shining on Chester United, one of the most varied 2D platformers I’ve ever come across (trust me, it makes sense). Let’s see if we can’t help it escape the cold emptiness of Greenlight limbo.

Chester is a 2D platformer with over 10 unlockable characters, a light RPG element and leveling up system, loads of unlockables, around 50 levels, and 8 “styles” that allow the player to change the look of the game at will. These styles include sketchbook, 8-bit, LCD, blueprints, and many more. They also each give a unique gameplay bonus to the player.

See? Told ya it’d make sense. These ‘styles’ affect the entire level, and grant a benefit to the player. For example, one slows your rate of descent, while another makes special attacks consume less ammunition. It’s a really cool mechanic, and if that isn’t enough, how about a rock-paper-scissors combat system? Each of the playable characters act as a ‘skin’ that can be applied at any time. Not only does this change your appearance, but it also changes your weaponry – both in terms of trajectory and their elemental affinity. Paying attention to this is pretty important, as all enemies are weak against one type, while other, well, barely make a dent in them. There’s also a shop, from which new characters can be unlocked after certain conditions have been met, along with other fun things like… a random bestiary page! And really, who doesn’t enjoy reading about their fallen foes?

Note: the game currently available is Chester, with Chester United being an upcoming update set to overhaul the entire game.

So riddle me this, dear reader: why is Chester United still struggling to get through Greenlight? It [Chester] has been out for a while (since May, 2012), so lack of availability is certainly not the reason. If you haven’t done so already, might I recommend visiting its Greenlight page and handing over a ‘yes’, if you like what you see? Remember: your vote matters!