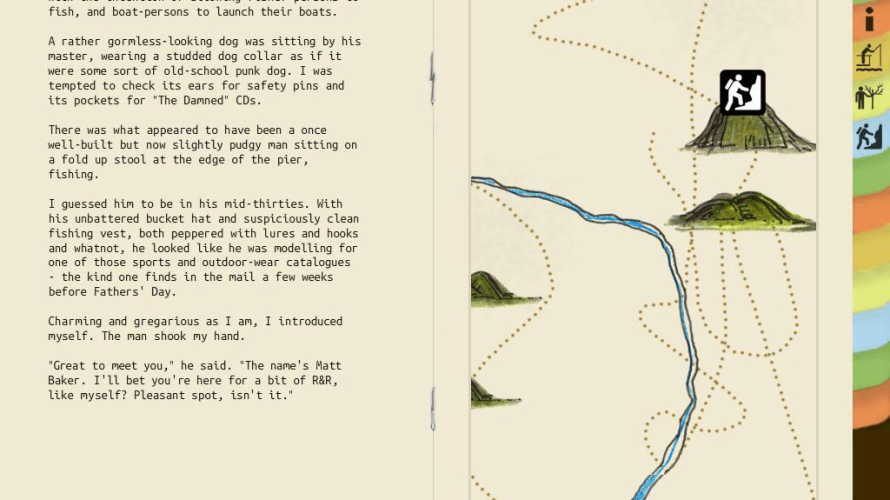 This time the spotlight will be shining on Alone in the Park, a graphical adventure not quite like any other. Let’s help it escape Greenlight limbo, eh?

Play as a rather misanthropic gamer who finds herself lured away from her computer to embark upon a real world quest: finding hidden treasure in a national park. Annoyingly, doing this requires her to locate and reassemble pieces of a treasure map. And instead of being populated with cool creatures like giant vampire squid bats or something, the park’s forests, lakes and mountains are home to the lamest NPCs imaginable. This treasure had better be legendary…

Giant vampire squid bats? Well, I’m sold. Sign me up. Actually, hold on. That sounds a tad dangerous. Just a tad. And… uh… playing a game, as a gamer? Something something fourth wall. Maybe the fifth too. Either way, given this strange mix of graphical adventure and classic pointy and clickiness, I smell fun times here. Or maybe that’s the scent of said treasure? Ya never know, as the whole thing – while likely fun – does sound a tad silly. But sometimes silly is good, and who knows if being Alone in the Park isn’t at least one of the two?

So riddle me this, dear reader: why do YOU think Alone in the Park still hasn’t made it through Greenlight? The game ain’t out yet, but even so -- how about visiting its Greenlight page and handing over a ‘yes’ if you like what you see? Remember: your vote could make all the difference!