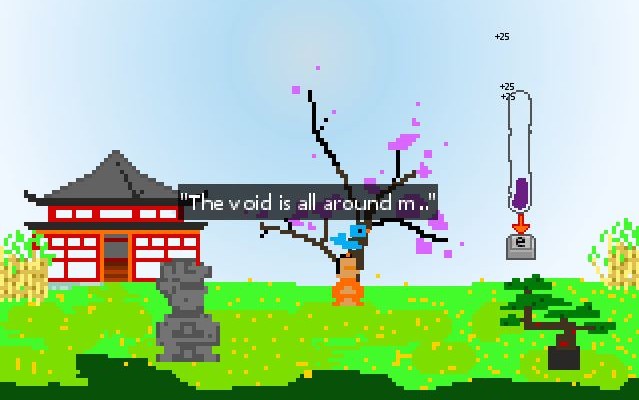 I’m not one for sitting down, closing my eyes and focusing on… absolutely nothing (aka. meditation). Steve on the other hand, genuinely wants to achieve a zen-like state. Too bad his attempts are constantly interrupted – too bad for those breaking his concentration that is because this guy solves problems by getting physical!

Like more than 2000 other games, Steve Can’t Zen was brought to life during the recent 26th Ludum Dare. The theme was ‘minimalism’ and tell me, what’s more, minimalistic than meditating? Yeah, think about that for a second… alright, time’s up – back to the Steve! I swear, this guy has serious focusing (and aggression) issues. Completely unable to sit his ass down and concentrate, without outside assistance.

One thing I particularly liked, was how the game actually attempted to hide a tutorial behind story elements. Clever! Not that there’s a lot to learn as it’s all pretty simple, yet somehow, rather entertaining. Every time you let Steve rest, at which point he kicks off another attempt, something happens. Every. Single. Time. He just can’t catch a break! Actually, that’s not entirely true since the game does have an ending – not going to spoil it though, except the following: it was totally worth it (and unexpected)!

There’s also a scoring element in the game, although sadly it lacks a high-score table so you won’t be able to compete against yourself. Would have been nice, but keep in mind that this was created in less than 48 hours. There’s, of course, the off chance that Steve Can’t Zen could be in for some post-LD attention, now that the competition has ended? Doubt that’ll happen though, as the game works just fine without such an addition, but ya never know these days.