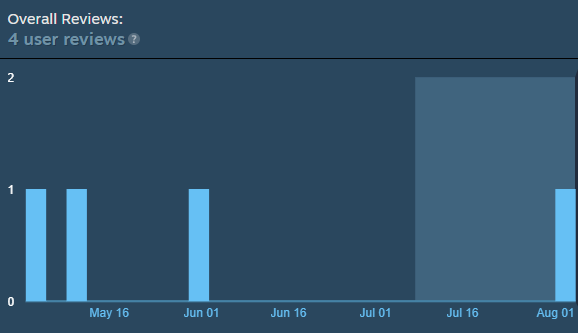 Summer has given way to winter with the changing of October to Nove-- alright so maybe winter kicked off several months ago depending on where you live, but October did give way to November. That much is a fact, and as such, it’s time for me to examine May’s Steam additions, highlighting those with criminally low review counts.


Brief reminder: no Early Access, no Virtual Reality -- what else? Oh, and less than 10 user reviews on the day I go through the lot (which is also when this article is published). May seem odd, but if your game hasn’t broken into double-digit review numbers after six months, something’s wrong. Somewhere. Anyway, my pick(s) are as follows…

Nadia Was Here release trailer
Watch this video on YouTube.

Nadia Was Here ($11.99)
In spite of having only played the demo at the time of writing, I am still quite surprised to find this game without more reviews after all this time. Are people uninterested in what seems like a lovely looking RPG, one with quite the unique take on both combat and character development? One can only wonder.

SmuggleCraft ($14.99)
Do you feel the need for speed? Because if so, then this one should be right up your alley, combining fast-paced racing with… well, world-changing smuggling affairs. Yup. I don’t quite get how that works either, but it sure does sound like a fun combination!

No Stick Shooter Trailer
Watch this video on YouTube.

No Stick Shooter ($5.99)
Or perhaps you’re more interested in blowing stuff up while defending… some planet or other? I honestly wasn’t super excited about this one, until I noticed that unlike how most other similar titles controls, here, you’re not directly in charge of the cannon. Instead, it’s more of a ‘point ‘n click’ affair (wait, what?). Very interesting.

Ophidia ($4.99)
Lats but by no means least, we have something… weird. Trailer doesn’t exactly make much sense, but a quick trip to its Steam page reveals that you are in fact a demi-god, tasked with cleansing the world. Of all life. Everyone must perish! So essentially, you’re a super powerful all-consuming snake. Well, shut up and take my money!