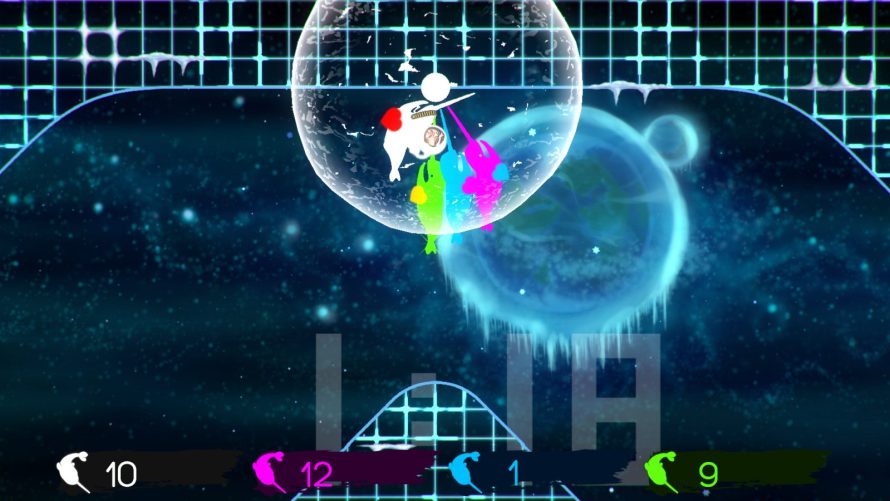 If there was a video game award for ‘party game of the year’, Starwhal: Just the Tip would be an incredibly strong contender. The game has up to four players (or one, with up to three AIs) competing in small arenas, partaking in the form of… deadly dolphins. It’s a chaotic, fast-paced, almost always out-of-control party game, with rarely a dull moment.

That said, I was skeptical when first firing up this one, but that lasted all of 30 seconds into the first match. To say that I’ve never played or seen anything quite like it, would be a huge understatement. Never figured ‘swimming’ around a 2D environment, trying to break the heart of your opponent(s) by piercing it with your pointy nose (or laser sword!) might provide so much entertainment. I know how silly and over-the-top the concept sounds, but it works, and really well at that.

After choosing your weapon (keyboard or gamepad), it’s off to the mode selection, which features quite the selection: last man standing (Classic), score-based (Score Attack), king of the hill (Zones) and last but not least, “grab the ball (heart) and run” (Heart Throb). I’m not usually one for playing the objective in PvP games like this, so it goes without saying that my personal favorite was Classic, followed by Score Attack.

In spite of that, since it was for a review, every last mode was still given a thorough play test, and you better believe that Heart Throb is every bit as chaotic as it sounds. Even more so with 4 starwhals(?) in the fray, as the only way to take the ball/heart from the current holder [in Heart Throb], is to pierce its heart (a recurring theme). But while it is a case of ‘the more, the merrier’, no matter the mode, the chaotic nature does sometimes make victory and/or defeat feel a bit… random. That’s just how it is though, part of the game and such.

Not like Starwhal: Just the Tip is a genuine eSports candidate anyway, or at least, not in its current form. There’s no continuous score tracking, as each match is tallied, the result then cast aside immediately, which is something I found rather odd. Party games like this are, in my experience, meant to be enjoyed in lengthy sessions, so an option to set up some kind of multi-round tournament-ish thing would certainly not have gone amiss. Might happen in a future update, however, as there are “plans for post-release content updates that will be totally free“. Here’s to hoping.

Aside from that, there’s plenty to like about the game. From the simple, yet stylish visuals, to its streamlined controls and gameplay, which enables most to pick it up and get started in seconds. Mastering it, on the other hand, is no mean feat, in spite of its three-button setup: left and right to turn, up to ‘boost’. Considering its kinda sensitive controls, I’d recommend one of the supported gamepads if possible, as it makes turning noticeably easier. That’s my experience, at least, after playing for a couple of hours. 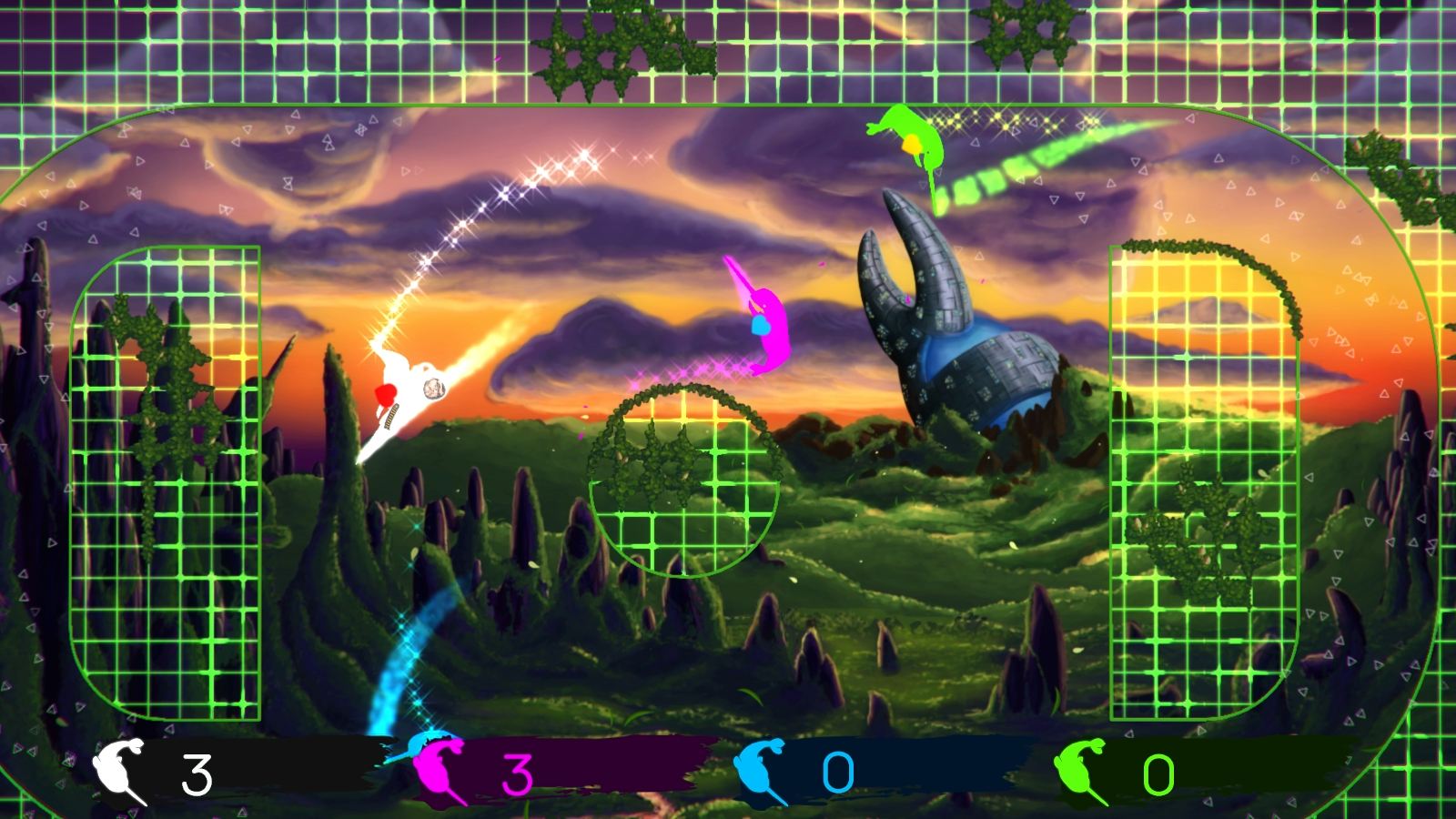 Alongside the variety brought by Starwhal: Just the Tip‘s four modes, there’s also a wealth of different battlegrounds, some of which even sports unique environmental hazards! The five different planets pack a total of twenty-five levels, which are all playable in every last mode. Some [levels] are almost claustrophobically small, while other span several screens, zooming accordingly to ensure no one’s ever off-camera.

You’ll want to keep an eye on your surroundings in places like The High Ground on planet Magnus though, as that one has lava flowing upwards at random interval, while Spacetopus’ Balls Deep pretty much resembles… a ball pit. Tricky to navigate, while also keeping your heart away from pointy things AND trying to poke everyone else’s at the same time? You bet. Hilariously chaotic? Well duh – of course!

Before starting each match, you’ll have the option to tweak the number of lives/points, time limit (all the way up to ‘infinite’), and whether it should be a free-for-all or team-based. But even more importantly, your in-game avatar can be customized with all kinds of crazy outfits; wearing a cupcake on your head and a tutu skirt around your waist – totally possible. Best of all, none of it needs to be unlocked, as everything – every level, mode, and accessory – is available from the get-go. Much appreciated.

Now, as I mentioned earlier, if you don’t feel like gathering a full crew of four, empty slots can be filled by AI opponents. Don’t worry about them not being fit for fight either, because I certainly got my metaphorical heart broken more than a few times, during my bouts against these bits and bytes in them virtual battlegrounds. They’re not perfect replacements for human competition though, as they lack the social element brought by many a fun party game, including this one. But as always, in lack of better, ya know? 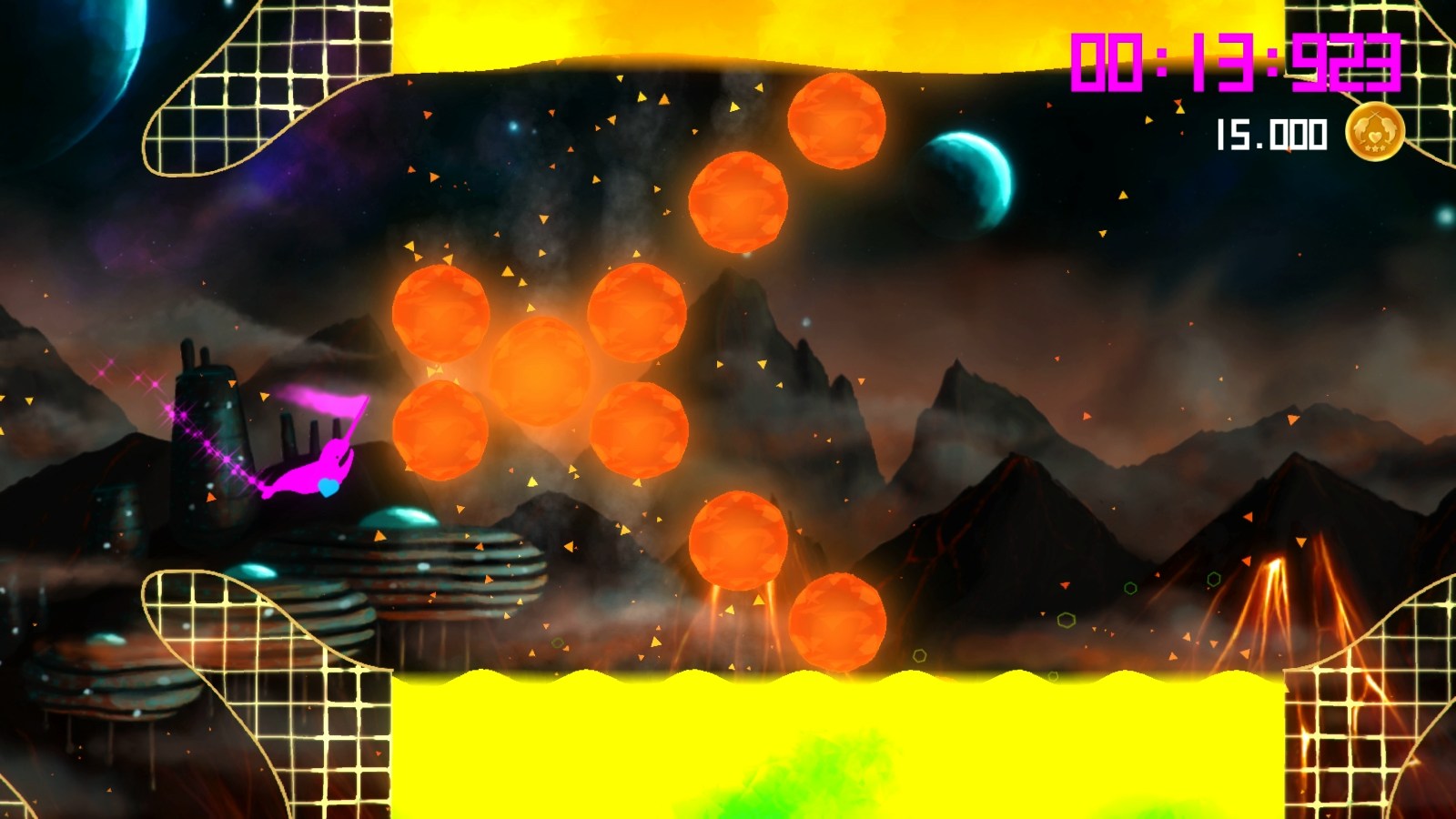 Speaking of going at it alone, the game features two challenge modes, in which you’re entirely on your own (against the clock): ‘Obstacles’ and ‘Targets’. The first one focuses on speeding towards the exit in each level, while the latter has you collecting floating hearts. Like the competitive levels, these also feature environmental hazards, like strong winds or, well, lava. Reach the end of each, and you’ll be awarded a fancy medal, based on your (timely) performance. A neat mix of practice grounds and speedrunning, complete with ghost replays! No leaderboards, though.

Ain’t often a game surprises me like this one has done. It’s also easily among the most different multiplayer-centric titles in years. Quite entertaining too, as it carries that strong “just one more match!” appeal, coupled with basic, yet functional, pick-up-and-play gameplay mechanics that never get in the way of the fun. It’s simple, colorful, stylish… fun. Did I mention how much fun it is? Do yourself a favor, pick up Starwhal: Just the Tip, invite a couple of friends over and get ready to p-a-r-t-y!

Starwhal: Just the Tip is available from Steam and Humble Store (Windows, Mac), where it carries a $14.99 price tag.