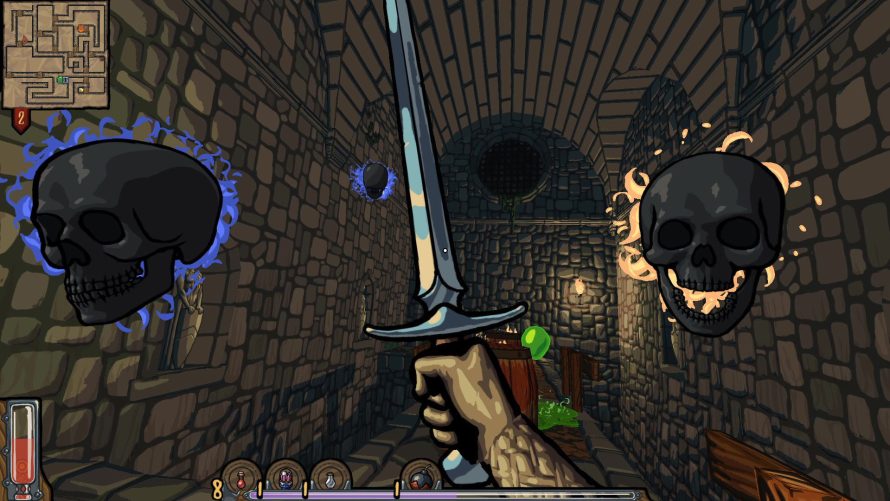 So, here’s the deal: after making a string of poor choices at one point or another, you now find yourself imprisoned in Slasher’s Keep, a terrifying place filled with traps and ungodly denizens (monsters). Yeah. Not good, as that means the path to freedom is going to require more than a little fighting. Better sharpen those blades and pray to whichever deity you have the greatest faith in!

All that said, might I ask you to stop for a moment and glance at the screenshot above in all its glory, and… oh my god, flying skulls, and of the blue-flamed variety too! Ahem. Right. Anyway, what I’m trying to say is that the art style in Slasher’s Keep is absolutely amazing. That might be ever so slightly more obvious in the trailer below all this than some still image though, but ah well. Flying skulls, man. Flying skulls.

You have been imprisoned and left to rot in the depths of Slasher’s Keep, a frightful construct towering above the forgotten forest in the remotest wilds of Ool.

Oh, you might as well not attempt to make anything resembling a map as the levels are randomly generated, much like the loot you’ll come across each run. Of which there will be many unless you somehow thread the needle and escape on your first attempt. Which won’t happen. Forget about it. Take your time instead, slashing and smacking everything that moves into spikes and other traps, and then when your inevitable demise comes… eh, craft an upgrade or two, grow stronger, and get back to swinging, thrusting, parrying; all that good melee-centric stuff! Freedom from Slasher’s Keep is only for those strong enough to claim it.

Slasher’s Keep is available on Steam, carrying a $13.99 price tag.