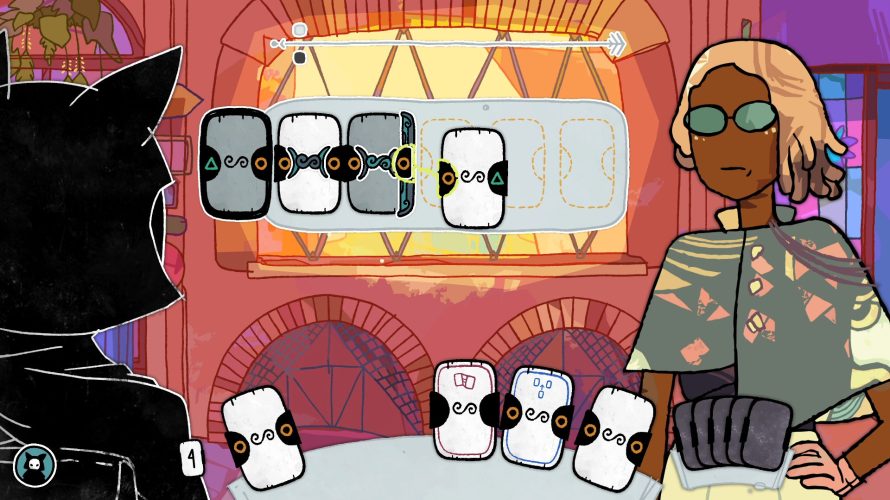 Change. Change is good for everyone, or so they say. Not all change is good, however, and playing through Signs of the Sojourner provided a solid reminder of that. With a deck of cards to direct conversations in favor of dialogue choices and an eventful journey ahead, no two trips will be the same. But is that a good thing?

Well, before I answer that, a proper introduction to Signs of the Sojourner might be in order: as the game begins, the player embarks on a lengthy road trip, leaving what you know behind – leaving home behind. Whether you would have even considered doing this, had your mother not left you in charge of her store upon dying, I do not know. But now you have shelves to fill with goods, and the only way to acquire such… is to hit the road and barter.

By which I mean that you’ll be playing a lot of cards as you go about talking to complete strangers in an effort to gain their favor. This might lead to the discovery of a new location, which is then added to your map, an item that’ll enable you to fulfill a request, or even better, something to sell in your new shop. Here’s the thing, though: if you don’t adapt as you venture further and further out into the world, you’ll be doing nothing but waste everyone’s time. Such is the way of the cards and there is no way around it.

Much like in the real world, everyone in Signs of the Sojourner have a different personality – some might prefer witty banter and beat around the bush, while others are of the straight-to-the-point variety. In order to accommodate everyone and not simply end up pissing them off, you’ll have to play your cards well, unless your objective is to create a string of mismatches and end up with nothing to show for it.

Oh right, I should probably explain how the card mechanic works: at the beginning of a conversation, five cards are randomly picked from your deck – these make up your hand, and by extension, your options for steering the conversation either in a positive direction or, well, negative. This is done by either matching symbols or throwing caution to the wind and creating a mismatch. Do act with caution, however, for too many mismatches will end the conversation with – as mentioned earlier – nothing. At all. 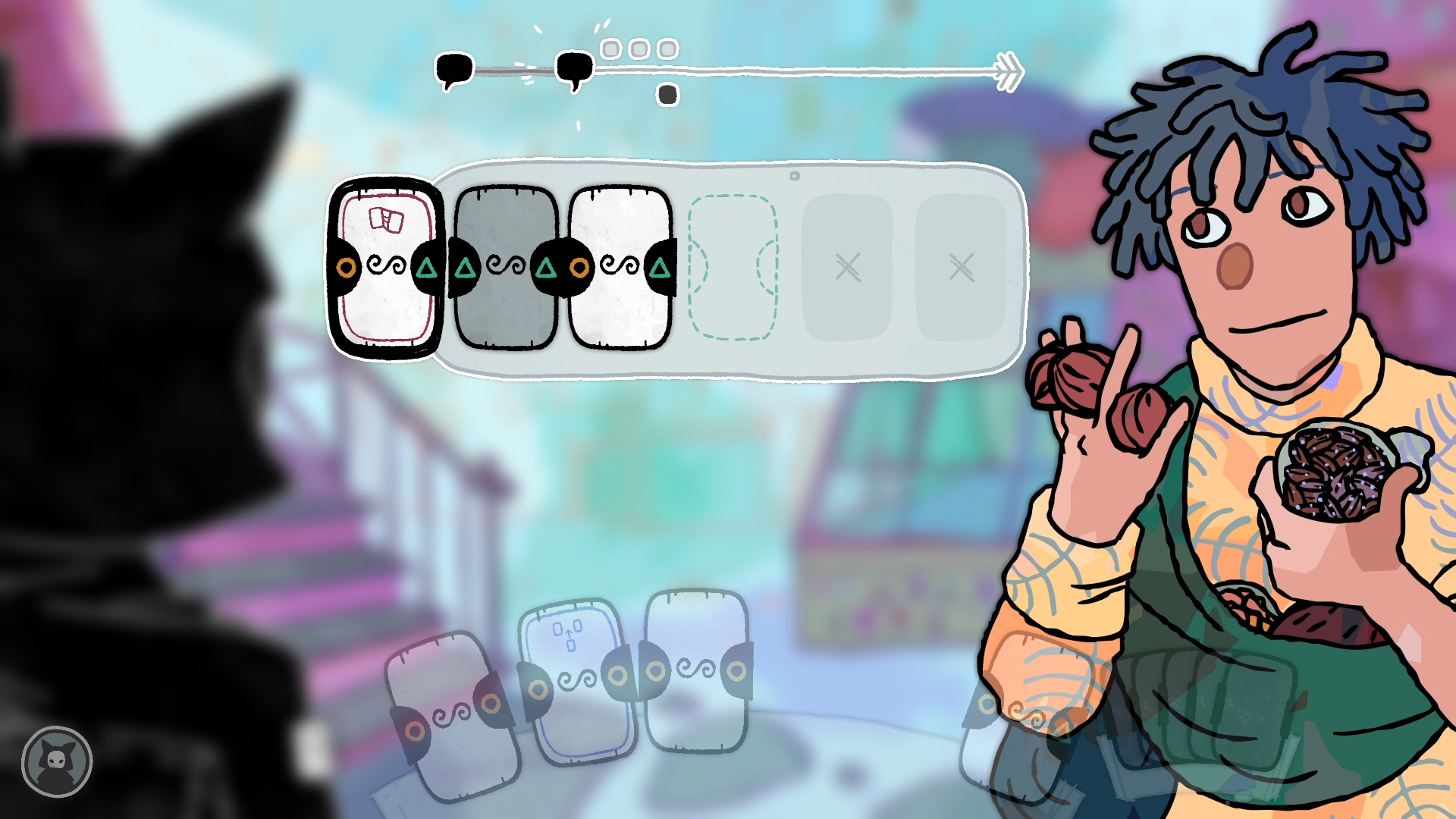 Incidentally, a mismatch is far easier to string together than a match, seeing how all you need for that is a single mistake. A match, on the other hand, requires both participants to converse accordingly, matching triangle with triangle, circle with circle, square with square, and so on. This might sound simple enough, and in theory, it is. Alas, in practice, you’re very likely to experience conversations that can only go awry because either you or the other person simply didn’t have the cards to match whatever you or they had to work with.

Sounds a little too random for your tastes? Well, fortunately, you have a certain degree of control over the whole thing, although not to the point where you can manipulate everyone into your way of thinking. Or at least, I wasn’t able to. Someone with groovy planning skills and/or extensive knowledge of the world of Signs of the Sojourner might be able to acquire a silver tongue though, getting everyone to play nice. During my time with the game, no such luck. It did help that I was given a preview of what symbols to expect prior to visiting each destination to have at least a hint of how to prepare.

See, at the end of a conversation, no matter the outcome, you’re tasked with a bit of deck-building, so to speak: grab one card from, far as I can tell, the person you just attempted to grill for information… and discard one of your own. This is where the game started to show its colors properly, and the whole “your deck is your character” bit starts to make a lot more sense. 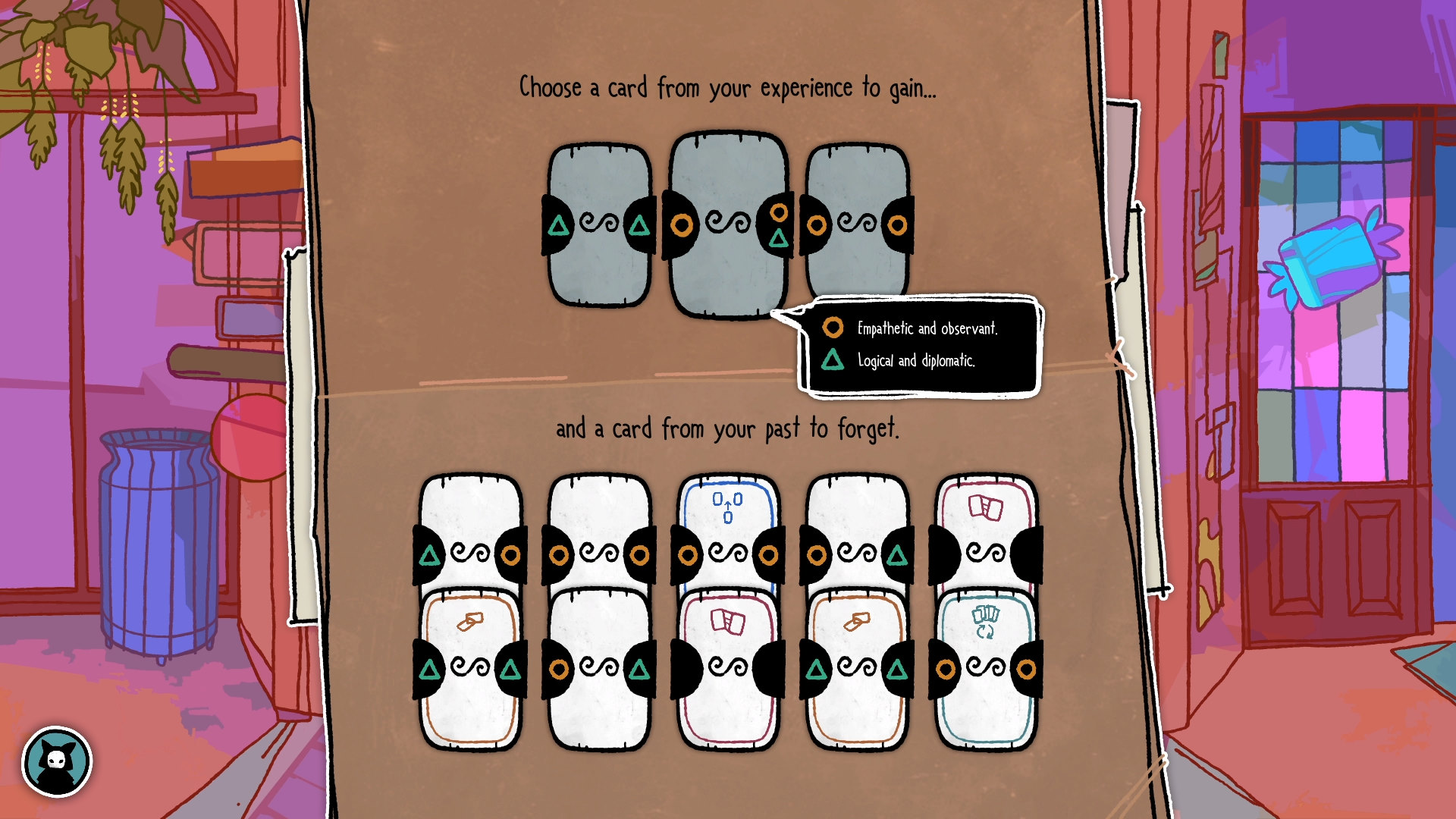 Without the right cards, you won’t be able to properly converse with that grumpy old man as you might as well not be speaking the same language due to the lack of cards to match his, ending the chat in a mismatch. Not a problem, just make sure you grab some with the right symbols before visiting that destination, right? Well, yes and no.

Here’s the thing: you’re also on a strict time limit, each destination visited taking up x number of days, and on top of that, fatigue is also a factor – albeit in the form of cards that can not be matched with anything. The only way to rest and clear your deck of those monstrosities is to return home and unload whatever you may have picked up on your journey. Oh, but you can only make so many trips before the story ends. Not with a ‘game over’, mind you. Just an ending. So better make the most of what little time you have to stock up because before you know it, that’s it. Epilogue time.

Ah, completely forgot to mention the other ways through which you can manipulate conversations in Signs of the Sojourner: on top of the varying symbols on each side of a card, some might also feature special powers. Well, persuasive powers, that is. There are ones that enable you to duplicate both symbols on the previous card and skip the other person’s turn entirely, to name but a few. Figuring out which cards to keep and which to replace them with as time goes on can prove a tad challenging, but seeing how there’s no fail state, at least you aren’t being severely punished for, you know, doing poorly. 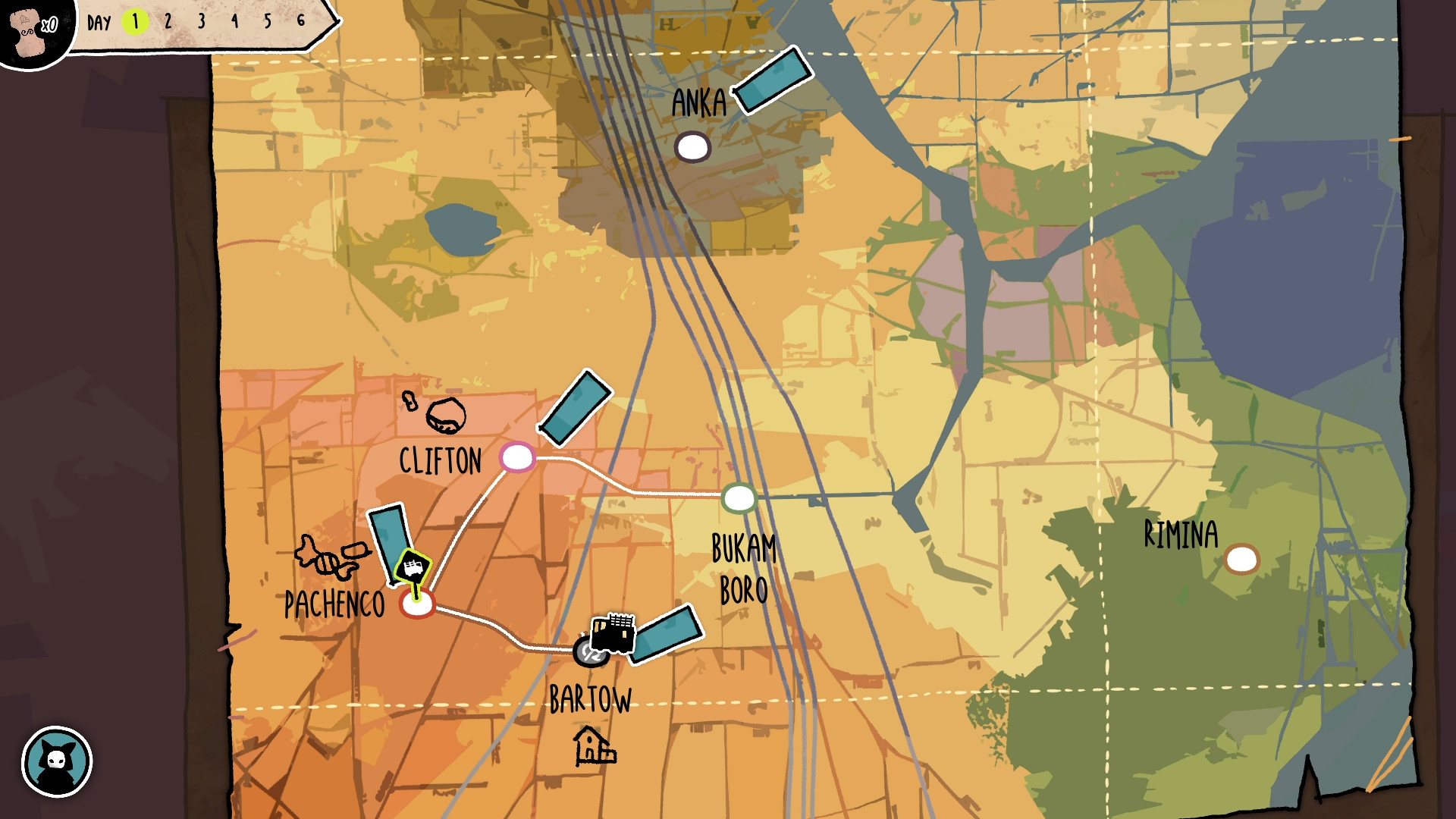 Obviously you also won’t be hauling artifacts and ancient treasure home either, although at the end of the day, settling for simply filling the aforementioned shelves in the shop is not a bad idea. Besides, for me, once I’d talked to a few people, it became more and more about the journey and the stories everyone had to tell, rather than… well, some silly quest for fame and fortune. Everyone in this world has something to say, a story to share, after all – even those who don’t speak a human language – and you’d do well to listen. Never know what you might find (out).

Now, as mentioned earlier, you will have to return home at several points throughout this here journey/adventure and who knows what you’ll find upon doing so? You might have changed, perhaps even grown a bit, during the time spent traveling, but what about those you left behind? They (obviously) didn’t share the experiences you did, so while you will be able to tell wondrous tales of the events that have transpired, who’s to say they’ll even listen to the new you? Much like in real life, people grow at different rates, change in different ways. It all depends on choices made while out there, gathering precious supplies to sell… at a high price.

What I’m getting at is that there is not just one specific ending to this tale. Were I to wager a guess, I’d say that depending on who you manage to convince to help you out, as well as locales visited, factor heavily into how everything is going to wrap up. Part road trip, part interactive fiction, and definitely part card game – this is a very easy recommendation and one that’ll likely clock in at a handful of hours for most. At which point, you know, replay! Use what you’ve learned to make different, perhaps better, choices. Take a different route. Plenty of reasons to revisit Signs of the Sojourner, after that initial journey ends.

Signs of the Sojourner is available on Steam and GOG.com, carrying a $19.99 price tag.