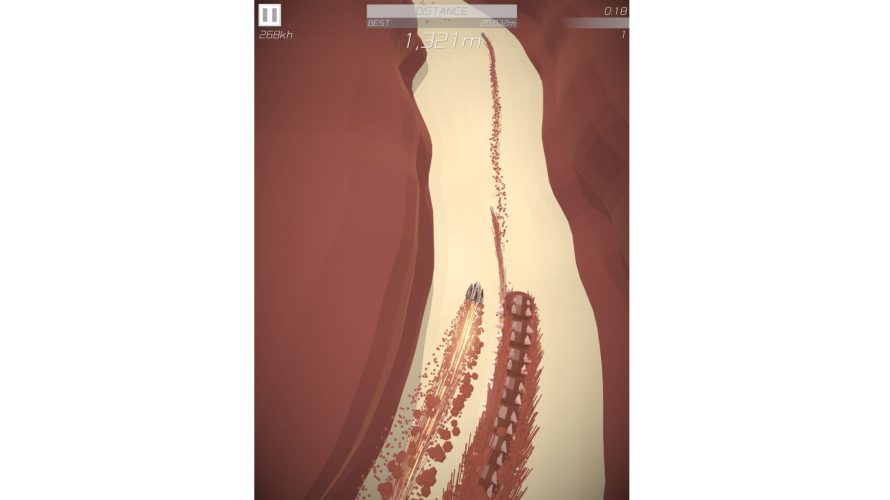 If you have a fear of giant sandworms, then Scorcher is pretty much nightmare fuel, as you’ll be navigating past plenty such in this fast-paced futuristic racer, while also doing your best to avoid the canyon walls. Those who laugh at the thought of squaring off against them, on the other hand, are likely going to find a good time as they strive towards one day (literally) becoming predator instead of prey.

With three different ships to choose from – each differing in speed, jump height, and lateral acceleration – mastering the game and unlocking Behemoth mode just might be easier, depending on your choice of vehicle. Or it might not be. Who knows? I sure don’t, but at least this way players will have a bit more freedom when it comes to matching strength and weakness with ship design, to some extent. Oh, and Behemoth is where you get to play as the sandworm instead of a lowly ship. An undeniably interesting unlock.

Actually unlocking said mode, however, is going to take quite a bit of both effort and skill, as the only way to get it is to, well, do really well. Opening up all four canyons on the other hand… now that can, according to the developer, be done by grinding, meaning everyone will eventually unlock every which canyon. Given the number of mobile developers that still believe level gating (see: star rating) is a good thing in 2019, I for one am glad to see Radiangames not follow that frustrating trend with Scorcher. Putting a fun new mode behind a skill barrier though? Noticeably less of an issue, I’d wager.

Hopefully, the Android version will be out soon (“either next week or in 3 weeks”, it seems), so I can get some hands-on with it.

Scorcher is available on iOS, carrying a $2.99 price tag.