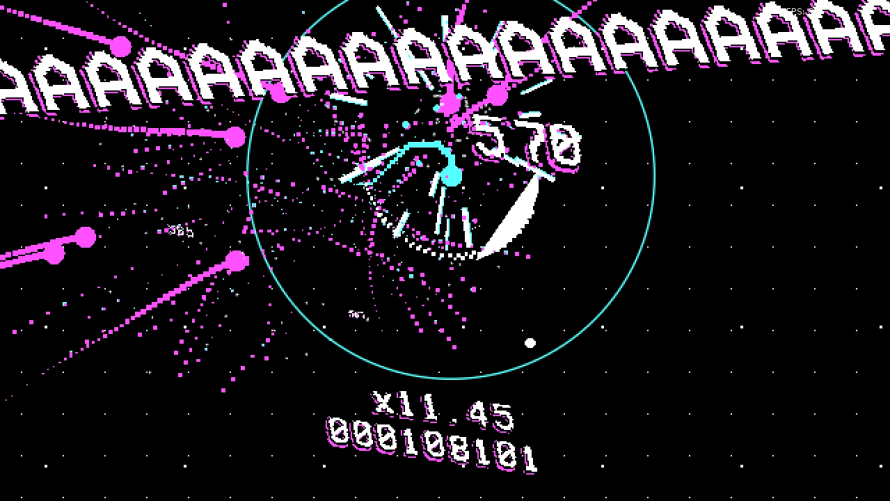 Have you ever played a twin-stick shooter and wondered what it would be like if instead of spraying bullets, missiles, and other crazy weaponry, you were instead… armed with a melee weapon? Probably not, but even so, SABRE is a perfect example of just that. Nothing but you and a very short-range blade between you and an infinite swarm of pink balls. Oh, and you’ll be playing as that cyan ball in the middle of… a cyan circle.

Before you run off, dismissing the game based on its visuals, keep in mind that it did come to be during the CGA Jam. As such, it makes perfect sense, and really, even if it doesn’t look like much, there’s a surprising amount of fun to be had here; even more so if you’re the sort who enjoys chasing a high score. Unfortunately, this does bring me to one of very few nitpicks: unless you beat your own record, you won’t know how the current run fared after its untimely conclusion. One might argue that if you don’t do better, there’s little point to care, I suppose?

Aside from that, left mouse button slashes, right teleports -- within the aforementioned cyan circle -- and you’ll have to actively engage in combat to not only increase the combo meter but also to… stay alive. I know it sounds pretty ridiculous, ensuring you’re within range to hit an enemy as much as possible to NOT get killed. Yeah. Well, there’s a reason for that: as explained by the developer, the combo meter “goes up to 5 in increments of 0.25, after which it’s 0.05. Getting hit or stalling for too long will reset it to 1”. So while not getting hit in SABRE is a good thing, not landing any yourself… significantly less so.

Now, one detail in particular that I really like is, unsurprisingly, related to that ever-important combo meter. See, after a high enough increase, the game gets all cheerful, rewarding you with on-screen text like ‘GOOD’, ‘WOW’, ‘AMAZING’ -- all the way up to the above screenshot, and perhaps even higher? I’m definitely not skilled enough to test that theory, though. In fact, for some reason, my best run -- of so many! -- was my first, which can be seen in the video below. And hey, after watching that, why not try beating my record?

SABRE is available for free from itch.io, and part of the CGA Jam.