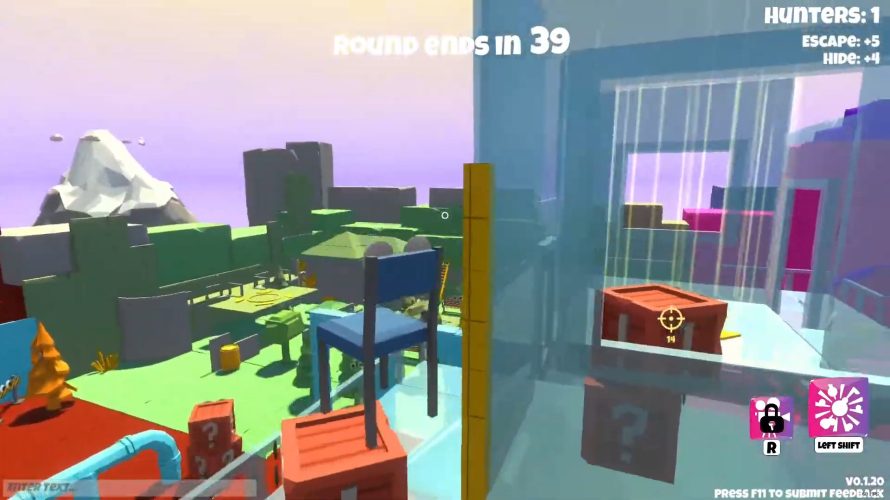 Prop Hunt. Oh man, if you haven’t experienced the fast-paced shenanigans that ensue in virtually every round of the popular hide & seek mod… you’re missing out. Big time. Not interested? Too old? “Meh, mod.”? Well, what if I were to tell you that PlayTogether Studio is about to release its own take on the multiplayer classic, complete with a colorful aesthetic, platforming, and special abilities? Welcome to Run Prop, Run!

The premise, for those unfamiliar, is relatively simple: up to twelve players can partake in the same match, where one starts out as the hunter while everyone else… either hurries up and disguises themselves as props, or find themselves joining the opposing team rather quickly. See, once a prop is caught, it turns into a hunter, each capture significantly reducing the odds of survival for remaining props. Classic.

But what makes Run Prop, Run! different? That’s actually a really good question. The original, having been around for ages at this point, is, I believe, extremely tweakable with a ton of variations and mods (yup, mods for a mod – crazy times), potentially leaving little room for another to come along and claim all that much originality.

That said, I am fairly certain Prop Hunt featured neither anything resembling (proper) platforming or special abilities, two features that are highlighted on the Run Prop, Run! Steam page. Ever seen a chair wall jump, or a wooden crate bounce around on its own? No, I’m not crazy – that’s how things work in Run Prop, Run!, and the only way to win is to somehow outsmart everyone else. Which won’t be easy when few props remain.

Anyway, abilities! While there are lots more, only classics like Smoke Bomb and Speed Boost have been revealed ahead of the scheduled release. Oh, and cross-platform multiplayer between PC and mobile, interestingly enough. So let’s see… desks, cars, chainsaws, metal detectors, hotdog stands, bananas, chairs, scarecrows, tractors (and more); so many props, so little time. I think you better Run Prop, Run!