Described as “a love letter to Hexagon.” by its creator, this is much more than some silly clone with a few additions/twists (unlike certain other ‘love letter’ creations). I mean, just take a look at the screenshot above. That’s right: 3D! Have fun twisting and turning, in an attempt to escape a constantly shrinking space. Resistance is futile. You will play Rotational.

There are no hexagons and you won’t be playing as a lone triangle as your surroundings constantly shrink, in an attempt to crush you. Instead, you’ll be rotating a black sphere inside what appears to be… boxes? As most who have played Hexagon would tell you, rotating the view to avoid collision on a 2D plane can be incredibly challenging in its own regard, but throw in a third dimension and, suffice to say, this certainly increases the overall challenge. It’s not the first time a popular two-dimensional ‘action puzzle’ game has taken to the third dimension either, but unlike in 3D Tetris for Nintendo’s Virtual Boy, it actually works in Rotational – so well in fact, that one can’t help but wonder why it has not been done before.

I mean, it’s not like Rotational and Hexagon are like two peas in a pod, one being 2D and the other 3D, pretty much only sharing the ‘rotate to escape’ mechanic. Not that it matters much, because fact is that Kevin Messman created and released an addictive monster of a game, and that’s what’s important. Oh, the catchy music? That’s the work of Andrew Gleeson, which can be purchased from Bandcamp (the music, not Andrew Gleeson).

I don’t know what it is with me and games like this, but like Super Hexagon (and Hexagon before it), Rotational instantly had me hooked. Unsurprisingly, it also managed to pretty much instantly kill me. Again and again and… again. Each session ending within a single digit timeframe, and we’re not talking minutes either, no, mere seconds! One might think that after constantly failing to even survive for a total of ten seconds, I would call it quits and stop playing. Yet something urged me to push on, and eventually, I did actually make it to – well, the following screenshot speaks for itself. 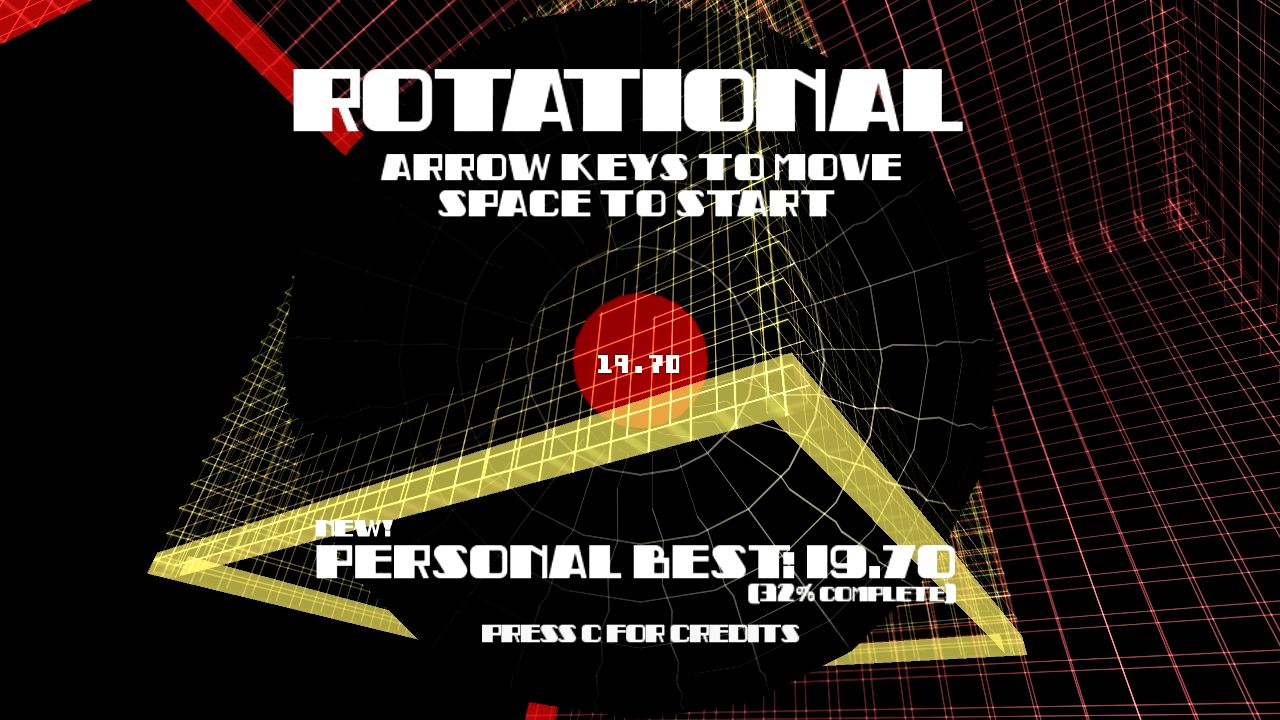 So, what are you waiting for? Here’s the link. Now go play it, get your ass kicked, and by all means, feel free to mock me in the comments below, when – not if, when, because we both know it’s gonna happen – you beat my record. Time to test those reflexes!