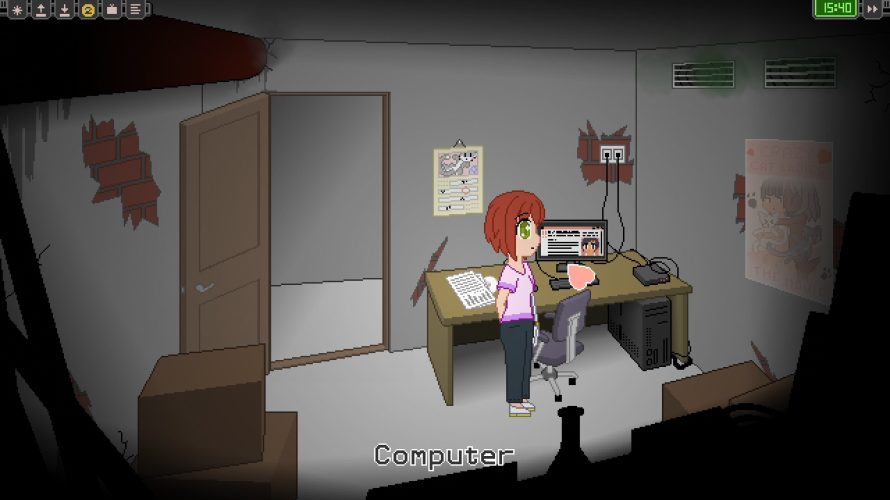 What would you do if you suddenly found yourself whisked away to a remote location, one so far away from Earth that distance is measured in light years? Panic? I think most would. Sophie, Rose Seed Replica‘s protagonist, however, is oddly calm about the whole ordeal, more surprised and confused than downright alarmed. Even so… how did she end up there, why, and perhaps most importantly, who is Bryn, the person responsible for that little teleportation trick? Ah, so many questions!

Yup. Many questions. So let’s start from the beginning where we find Sophie, the redhead pictured atop this review, doing research for a somewhat shady private laboratory, dreaming about the day when her life will change and she’ll get to fly away on a unicorn with the princess charming of her dreams. A hopeless romantic if there ever was one, and not the least bit bothered by her sexuality, as indicated by how it’s not long after their initial meeting before she begins flirting with Bryn. 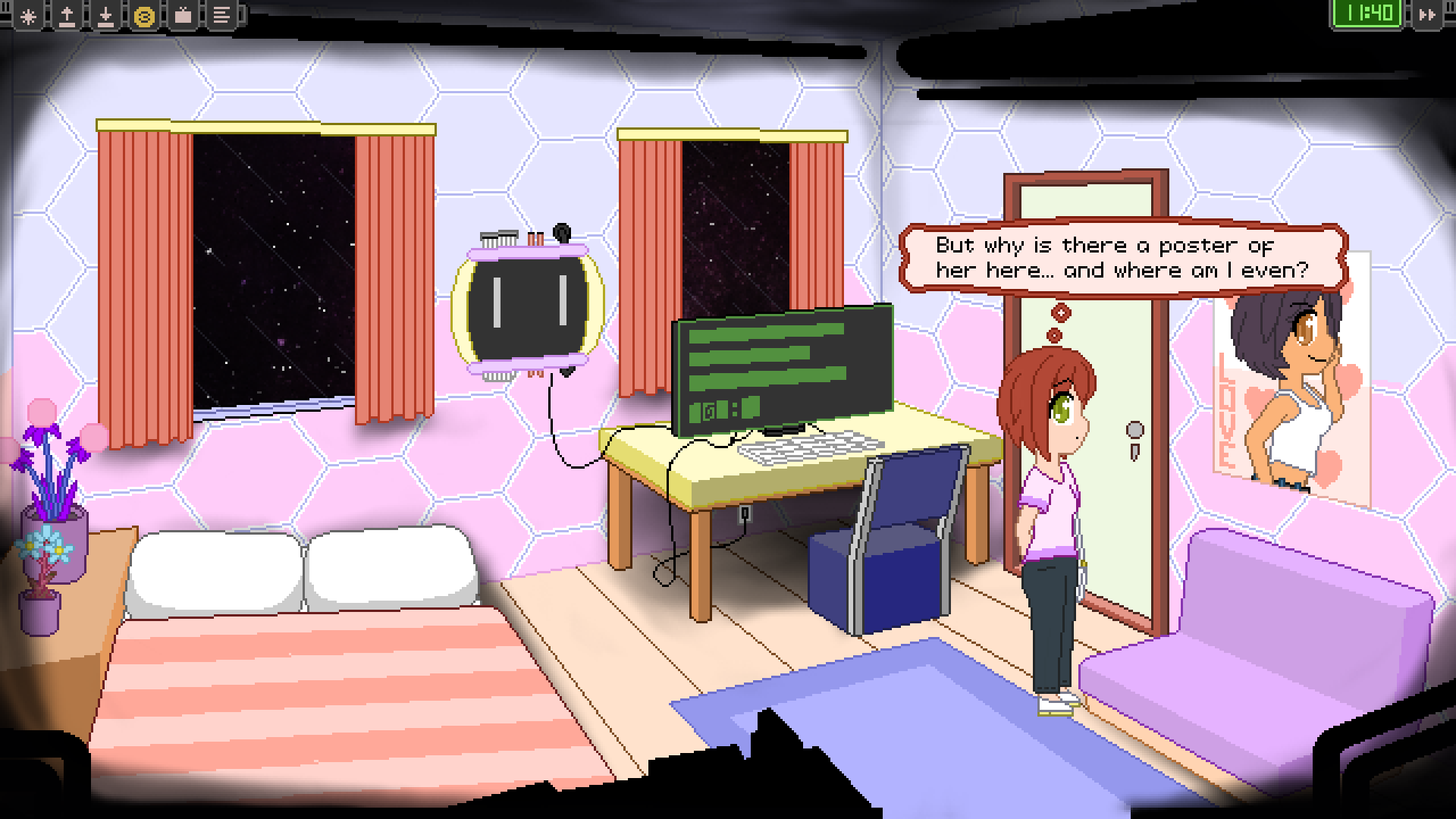 “Wait a minute,” you say, “didn’t Bryn kidnap her to the other end of the galaxy?” Well, yes, she kinda did. Does that automatically mean she’s a bad person, unworthy of Sophie’s advances? Well, no, it doesn’t. Innocent until proven guilty, ya know? Besides, given Sophie’s eagerness for a change of scenery, maybe the events that kick off Rose Seed Replica are actually a blessing in disguise? Kidnapping is kidnapping, no way around that, but Bryn doesn’t exactly give off a villainous vibe. Quite the opposite in fact, which is likely no small part of why Sophie found herself so drawn to her, unusual circumstances aside.

But let’s leave those two for a moment and get a bit more technical. See, unlike a lot of other story-driven games that tend to be stick to a single genre (visual novel, point ‘n click adventure, walking simulator, etc.), Rose Seed Replica plays like a hybrid of sorts, blending elements of interactive fiction with that of a traditional point ‘n click adventure; save for the inclusion of inventory puzzles, thankfully. There are puzzles sprinkled throughout the game, however, and unlike such content in other games, their role here actually makes sense.

That said, the vast majority of your time will be spent in the realm of interactive fiction, the game featuring an absolutely staggering amount of dialogue and well over a hundred choices, sending the player down one of six different routes with four different romance types to experience. Or in other words, lots of replayability, even after the credits roll on what I can really only describe as an incredibly sweet lesbian romance adventure. One where the journey matters just as much as the destination, and the more I got to know Sophie, Bryn, and everyone else, the less I wanted the credits to roll. Definitely going back to check out events that were missed because I went for option A instead of B (or C, or D, or E…) during certain conversations. 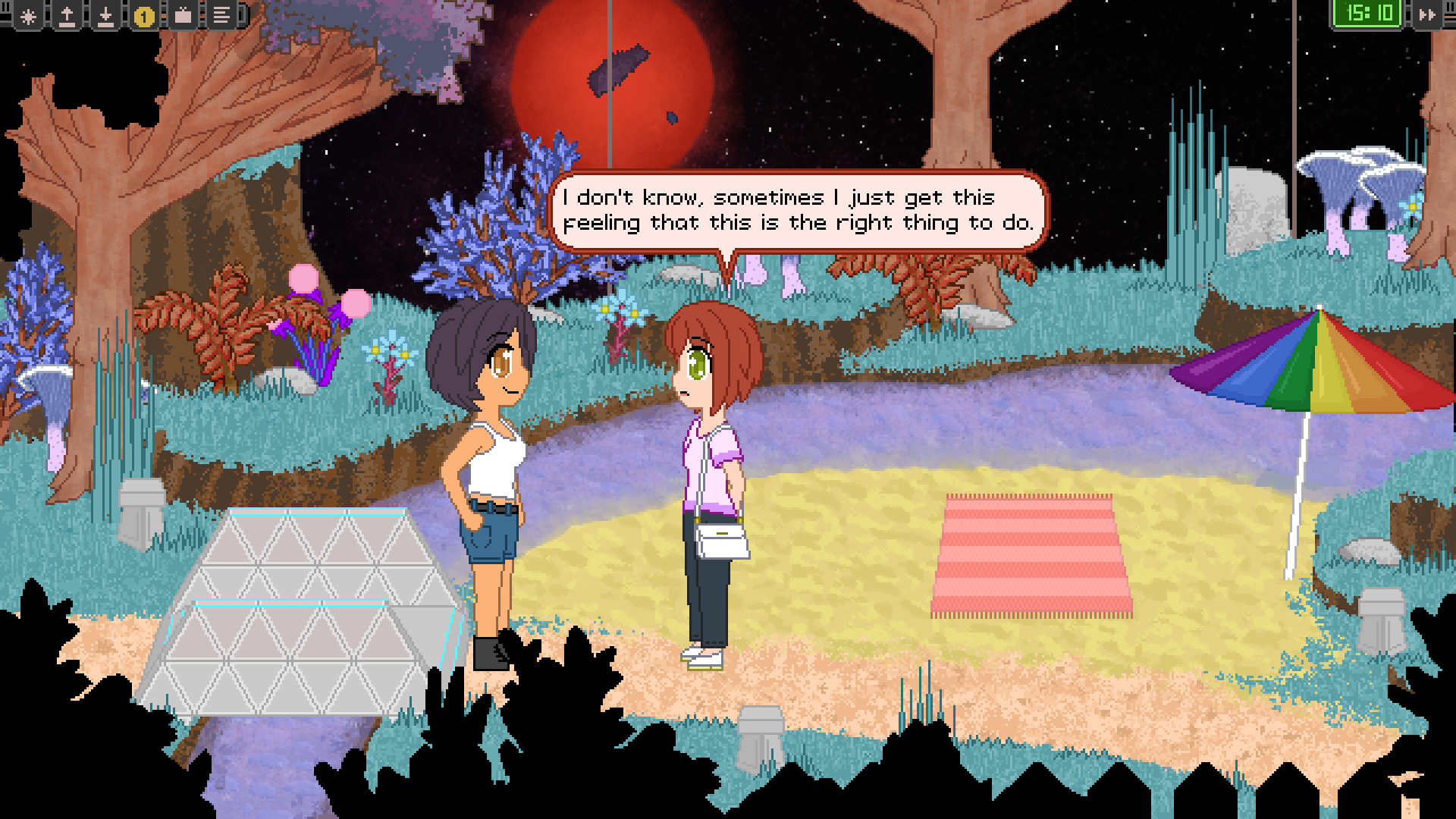 Not that there’s any easy way to keep track of choices made over the course of the story, however. At least, unless you pay attention during the credits, which features a story recap complete with path numbers(?) slowly scrolling across the screen. Since I have gotten in the habit of recording gameplay for reviews, I’ll be able to just open the footage and make different choices based on what happened during this initial playthrough. As for everyone else, well, hope you have a near-the-finale save ready. That minor nitpick aside though, courtesy of features mostly found in visual novels – fast-forward read/unread text, a readily available chat log, event recap in a journal – additional playthroughs are bound to be noticeably faster, provided the player is only interested in unseen content. Sure, still gotta point and click to make Sophie wander about, talk to people, examine items, and so on, but at least repeated dialogue can be sped through this time. Undeniably helpful.

Oh right, the dialogue is not the only thing with a fast-forward feature: clicking again during an animation will, in most cases, skip it, and you even have the option to jump ahead to a pending event instead of waiting for the in-game clock to tick. And it will. All the time. Well, unless a scheduled event is pending and the time for it to begin has been reached, in which case it’ll stand still until Sophie reaches her destination for another sizeable chunk of fun. Whether it be some alone time with Bryn or something involving everyone else, from non-interactive cut-scenes to informative chats, these were always a genuine joy and, much like the puzzle aspect, they never felt out-of-place.

Now, I know the setting itself isn’t exactly the most realistic ever, Rose Seed Replica leaning more than a little towards sci-fi with its themes, but when has that ever stopped human beings from going about their daily lives, falling in love, going on dates, getting to know one another better, solving mysteries – and all that good stuff? Uh, perhaps not in that exact order though. Sophie and Bryn may be a not-easily-defined distance from home, the ‘how’ and ‘why’ a bit of a mystery, but why let that come between them? I mean, something does, as indicated by how LezLiz, the developer, notes that the game does contain ‘light drama’; although surely nothing that can’t be fixed, right? Right? RIGHT?! Yeah, about that… 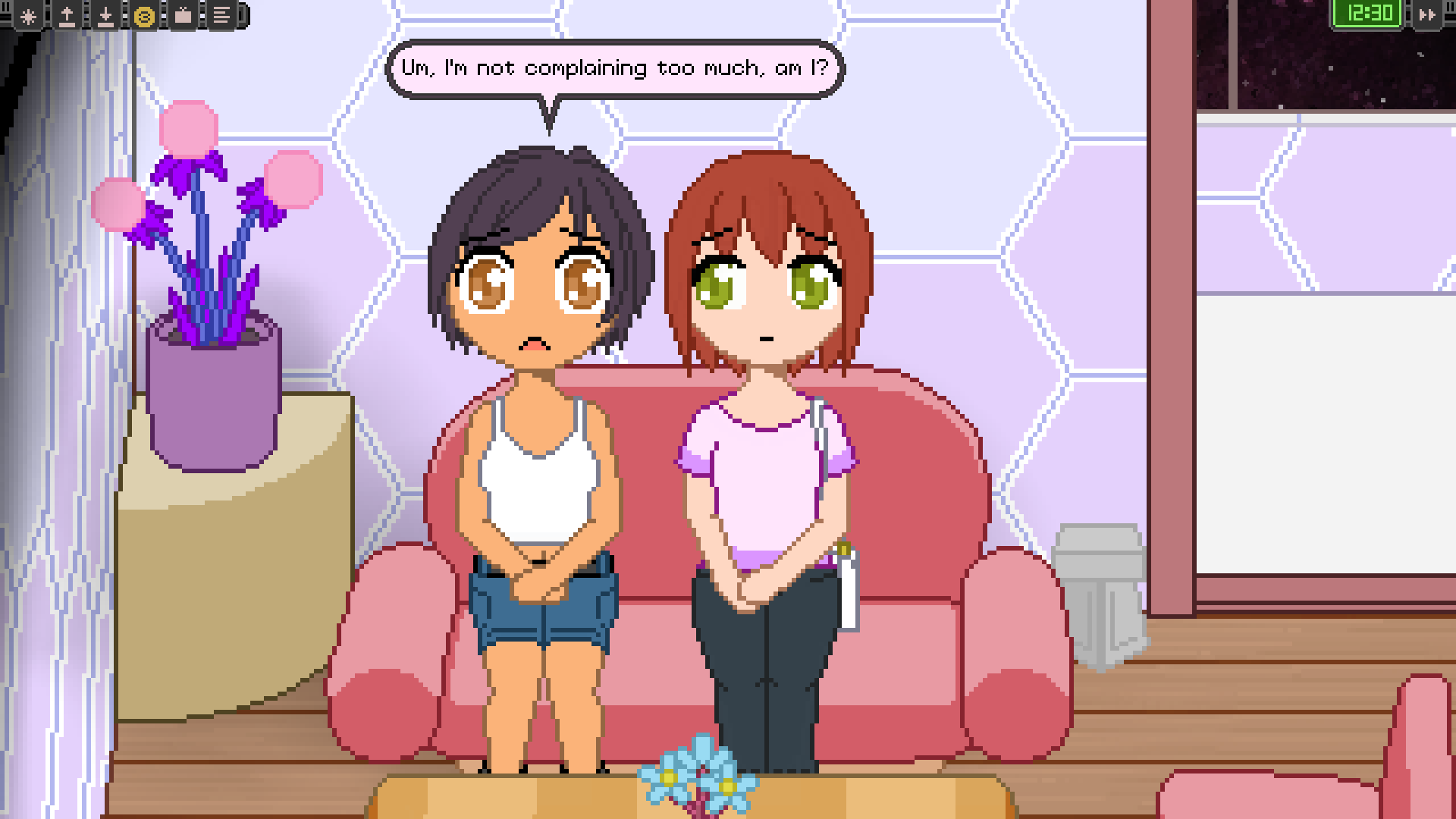 Just kidding. Remember, ‘light drama’, not ‘this is the end’ drama, and on top of that, the whole thing wouldn’t appropriately be billed as a ‘feel-good point-and-click lesbian love story’ if it was overflowing with drama and upsetting moments. In fact, it’s closer to the exact opposite, humor and heartwarming moments taking precedence over tear-filled slamming of doors and breaking of hearts. They say the best examples of comedy are still funny the 100th time, and while I’m not sure I’d want to revisit my favorite moments – one of which featured a barrage of cheesy puns – that many times, I did absolutely love when things got more than a little silly.

The same holds true for its more serious moments too, as even when drama ensued, I still found myself eager to see where it was going, how it would change those involved, and how they’d (hopefully) eventually be able to move past whatever created friction between them. Perhaps I’m just every bit as hopeless a romantic as Sophie, but right from the get-go, I had high hopes that everything would work out, that everyone would get along in the end, either as friends or… something more. Ah, that reminds me: while Sophie and Bryn are the focus of the story, there are other characters of importance too, each with an important role to play and lots of dialogue to exhaust. Dialogue which, depending on choices made, just might lead to our heroine actually making friends in this strange new place.

A place which, depending on your opinion of pixellated visuals, may or may not be favorable. As someone who really likes such an art style, especially when coupled with the point ‘n click adventure genre, I was immediately sold on the look of Rose Seed Replica. Expressive facial animations and reactions also help make the characters feel alive, or as much as the two-dimensional style of pixel art allows, anyway. It’s actually pretty impressive just how much was shown during key moments, from faces turning red from blushing and tears forming in the corners of a characters’ eyes to mouth movement during conversations and even the classic ‘wide eyes, open mouth’ to indicate surprise. Good stuff. 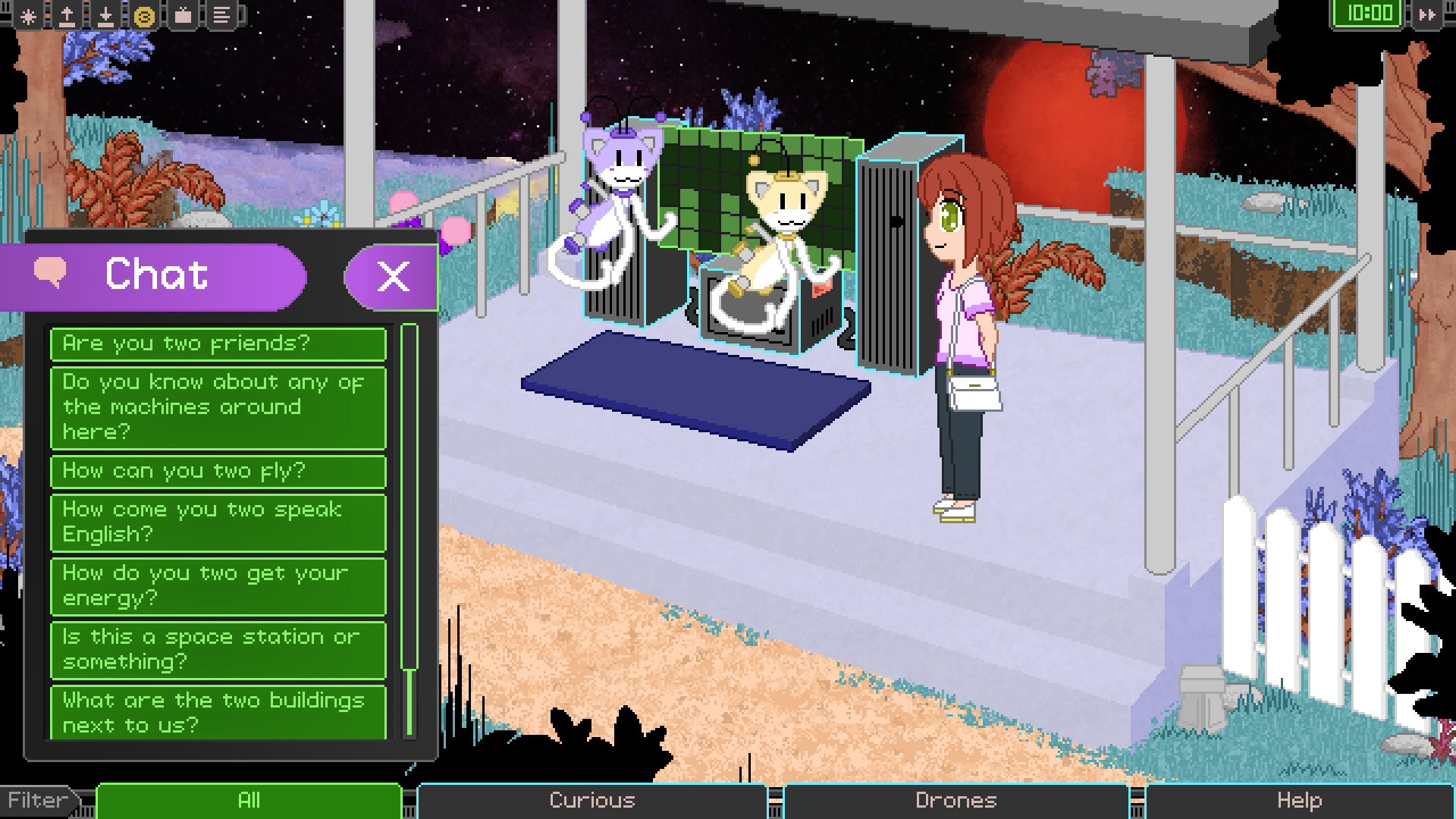 Less good, however, and the only genuine downside, in my experience, is the aforementioned time management aspect. Not because it creates a sense of urgency, as that was rarely, if ever, the case. No, the problem I have with that particular feature is how it’s tied directly to how much you can accomplish each in-game day, how you can only pick another character’s brain through so many dialogue options before they simply won’t open up a conversation anymore until the next day. Time and time again. I don’t know, it just felt a bit off, to say the least. Especially in contrast to how much fun every other aspect was. Exploring the world, getting to know its rather unusual inhabitants, flirting with Bryn, trying to solve the big ol’ mystery that landed Sophie (and Bryn) in that remote location. All of it. Such a joy.

This does make that one nitpick feel like less of an issue than it might have been otherwise, but it is still something to keep in mind, even though it by no means got close to ruining my fun with Rose Seed Replica. Oh, and since I do seem to be in the habit of quoting the developer of a game whenever I review it, here’s another one: “Oh, and you might also be able to make sense of some of the nonsense going around if you keep at it.” Yeah. Not sure about that one, although on the other hand, if one makes sense of the nonsense… it would no longer be nonsense, thus potentially losing all value. So maybe it’s for the better.

Anyway, onto something that could not be further removed from nonsense: just how LGBT+ positive and inclusive Rose Seed Replica is. A healthy dose of dialogue actually covers topics not brought up as often as a lot, myself included, would prefer. Topics regarding gender identity, sexuality, and even ones of a more philosophical nature. At the risk of sounding like a broken record: again, like the puzzles, these conversational choices never felt out-of-place or as if they were added without much thought behind them. Exactly how content like that should be handled. If you’re going to include an LGBT+ character, don’t just do it to check off some fancy marketing box, and the same goes for extensive (or any, actually) amounts of LGBT+ dialogue. 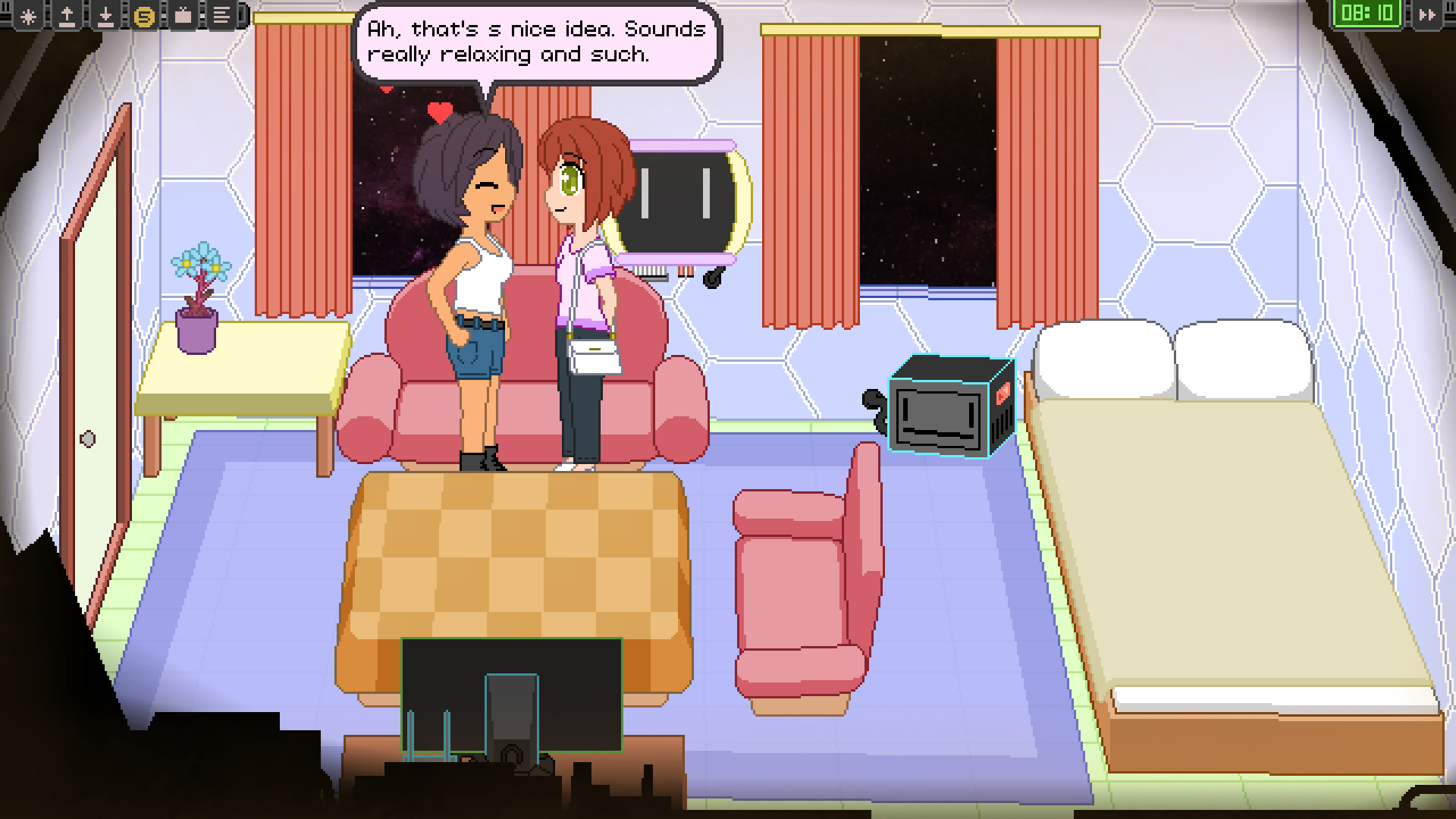 Would Rose Seed Replica have been better overall without such an emphasis on LGBT+ content while still having a lesbian protagonist, though? I’m gonna go ahead and say… no, although mostly because of – as previously explained – how it’s implemented, and how it helps flesh out the characters, not to mention the remote locale Sophie and Bryn now find themselves in. Seeing how big a part of Sophie’s character, in particular, it is, toning down that aspect in favor of who knows what else – if anything – wouldn’t benefit the game as a whole. Package deal.

All that said, some 1700 words later and I still haven’t actually answered the questions from that initial paragraph. Not going to either, because of spoilers (duh). If you want to know what Bryn’s deal is, how and/or why she kidnapped Sophie, just what’s gonna become of the two castaways, along with so many other mysteries, well, only one thing to do: pick up a copy, either from Steam or itch.io, and prepare to embark on a journey to the other end of the universe, where a truly heartwarming lesbian romance story awaits.