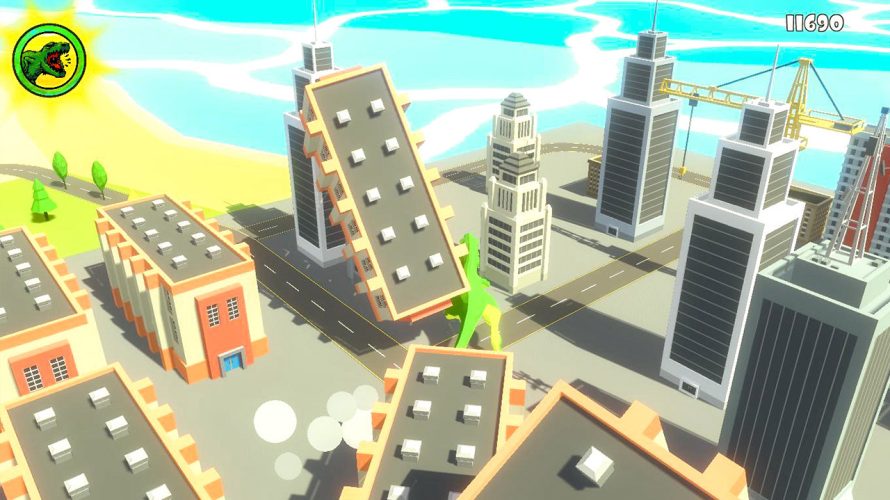 Meet Rex. Rex is a dinosaur, and probably mankind’s last line of defense against alien invaders, starring in his own very game, wearing a top hat and… a tutu skirt? Oh boy. This is a weird one, isn’t it? Well, whatever the case, there are aliens – and cities – to demolish, and you can even bring friends (Rex clones, surely) to help with the mayhem. Don’t forget to Roarr!

It’s a long way to the North Pole, where the alien base resides, and many an odd enemy will stand in your way, so be sure to have Rex don the best apparel money(?) can buy in Roarr!. Wait, no. I’m actually almost certain appearances won’t do much for your success rate, compared to simply destroying everything in your path – and I do mean everything.

Roarr! Rampage Rex Adventures is an extremely dynamic, colorful and funny arcade game that won’t resist neither a child nor an adult.

So, what we got here? Ah, one dinosaur against six polygon-filled worlds, each featuring a unique boss. Almost makes me feel sorry for the bad guys, except… not really. Even less so if three other people join the fray, as then I suspect the carnage will truly be spectacular. And that is what it’s all about, at the end of the day. Who’s got the balls to bill a dinosaur for environmental damages, after all? No one, that’s who. Go ahead, Roarr! and “release your prehistoric power”. You know you want to.

(Thanks to Nintendo Life for the heads up.)