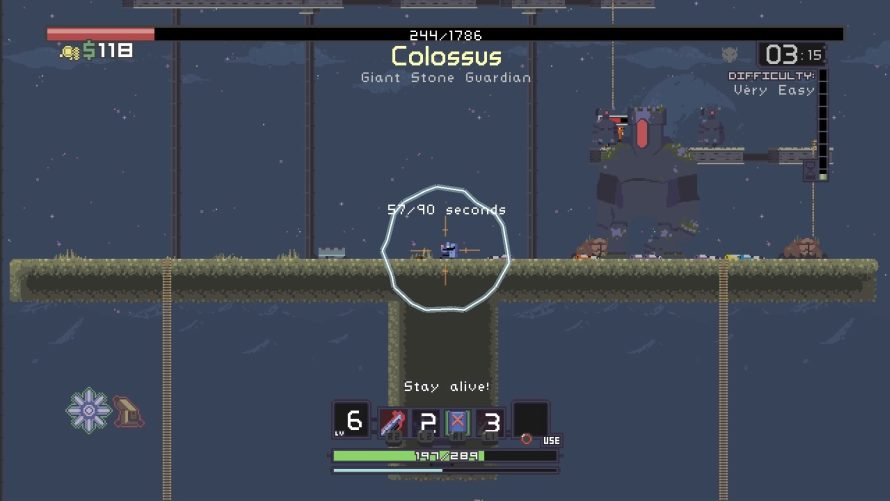 Beam down to a planet in Risk of Rain, kill stuff while acquiring new – potentially better – equipment, and eventually, (maybe) kill some huge alien nasty to access the next area. Exploration? Sure. Well, maybe. Just keep in mind that as times goes by, the opposition will increase in strength. Oh and it’s dangerous to go alone, so bring a friend (or three); perhaps even on the same console? Now that’d be groovy for sure.

Although since Risk of Rain was originally released way back in 2013, and has sold more than a million copies, you’re likely already familiar with the workings of the popular procedurally platformer. Besides, this is about the upcoming PS4 / Vita ports more than anything, and man did ever add some good stuff for those. Stuff that’ll likely never hit the original desktop version of the game, seeing how it’d require some serious rewriting of how everything works, and who’s to say the two people who make up Hopoo Games can even do that with the game’s engine?

If you’ve ever played the game on PC (or Mac or Linux) and wanted to take the game online, you’ve more than likely experienced the hassle I’m referring to. Two words: port forwarding. No one likes it, but unfortunately, it’s a thing to do if you wanna play Risk of Rain online. Unless you’re playing one of the two upcoming Sony versions of course, as these will launch with matchmaking / private lobbies, local co-op, and even a combination of the two, albeit with a limit of two per machine instead of four – without the need for any sort of technical magic prior. Not that I’m jealous or anything. Nope.

Three years later, Hopoo Games and Code Mystics has partnered up to send Risk of Rain to PlayStation 4 and PS Vita! While PC gamers might be familiar with Risk of Rain, we have a few new features to the game’s online system – exclusive to PS owners.

What, cross-platform between PS4 and Vita? Oh don’t worry, that’ll also be a thing. As for cross-buy and cross-save support… no word on those just yet. Same goes for anything resembling a release date. Maybe later this year, maybe not until 2017. Time will tell.