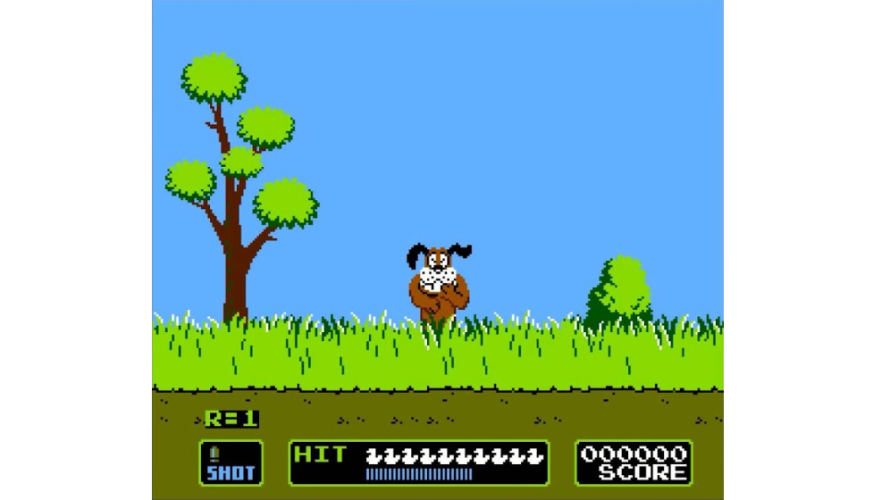 Duck Hunt introduced NES fans to lightgun gaming with the zapper. It was simple, yet highly entertaining game. Maybe it hasn’t aged with gracefully, considering how a huge part of it was based around the zapper and today everything seems centered around motion controls, but I’m willing to bet many of you remember spending quite a few afternoons with friends, competing for high scores and making rude gestures at your tv as the dog laughed, when a duck got away! Didn’t make it any better either, that you couldn’t shoot the dog no matter how hard you tried. Guess Nintendo thought it was okay for players to kill innocent ducks but not the dog who laughed in your face, at every opportunity?

High-score galore!
At its core this game was all about getting as many points as possible, accomplished by hitting all the ducks. Sure, it was a simple game, but that did not mean there was no room for it in a videogame collection even after more complex titles had taken residence in most peoples NES. Its main problem was definitely that it was highly repetitive, so playing it for longer periods of time made it seem worse than it really is – playing it for a few minutes then to turn the system off again was certainly the best way to enjoy this one. Longer Duck Hunt sessions weren’t entirely out of the question though… provided friends were available for some hotseat competitive multiplayer.

But wait, there were other things than ducks to shoot…
This game had three different modes, though only one that did not involve ducks: Clay Shooting! Ever wanted to do that, without all the hassle? Then this was the mode for you. It did not set itself apart all that much from the other modes Duck Hunt had (“One Duck” and “Two Ducks” – guess how they differed). But at least you didn’t have to deal with the dog mocking you for being bad at it, so there’s that at least.

So why blog about it, if it’s so simple and repetitive?
Nostalgia sometimes has a way of blurring memories… but even though the gameplay was simplistic, it had no actual multiplayer (outside of passing the zapper around), very few modes – it was still impressive at the time; most likely thanks to the peripheral more than the actual game, unfortunately.
I would love to see a remake with updated graphics and more meaty gameplay on the Wii, but I guess we’ll have to wait and see what Nintendo has in store for the Wii U since the Wii’s days are numbered.