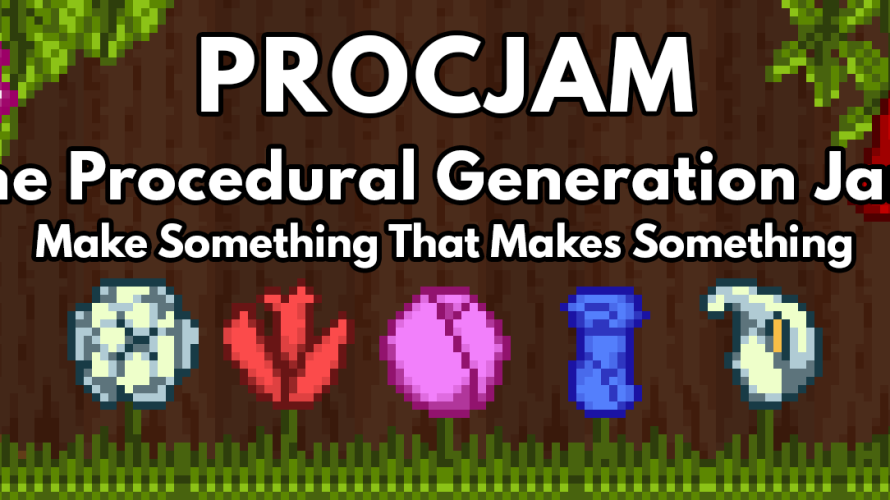 Ah, procedurally generated content. Or perhaps… entire games? Heck, for this particular jam, it doesn’t even have to be a game. Could be art, a sound clip, a piece of software – so long as it has procedural generation at its core. Does that mean it’s not a game jam? Probably, but who cares? I mean, games will still come to be during its seven-day run, I’m sure. So there – it’s a semi-game jam (because that’s a thing)!

But seriously, unless you only fancy super predictable experiences, chances are you have, at some point, indulged in something containing procedural generation. As for me… that’s mostly been in the form of video games. Roguelikes, for the most part, as the main component in a lot of these – alongside permadeath – is… a randomly generated world. In fact, that feature often extends to itemization too, stats on swords, axes, and various armor being determined by the roll of invisible dice.

If you think it’s a PROCJAM entry, it is. Don’t worry if it’s a game, or if it’s really art, or if it’s ‘proper’ procedural generation (that doesn’t exist). If you made something and want to share it with us, please submit it!

Some hate [procedural generation], others love it, and hey – at the time of writing, more than 700 aspiring content creators have signed up for this year’s Procedural Generation Jam. Which means there’s definitely an interest! Now, as for how many will end up actually releasing something ‘complete’ by the November 13 deadline, well, that obviously remains to be seen.

That said, unless I’m mistaken, it doesn’t actually have to be feature finished, complete, done, or whatever you call a wrapped-up-and-shipped project. It does need some extent of procedural generation to qualify as an entry, however. So do keep that in mind, as you delve into Procedural Generation Jam 2016.

Oh, and be sure to check the video below for inspiring talks about, you know, generation. Or some such.