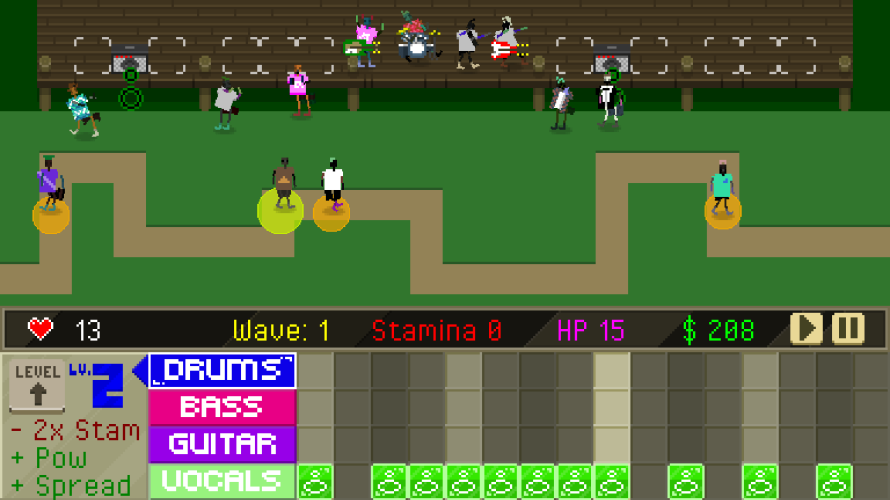 If rock and roll is to be made, someone shall have to play the drums, bring the bass, play the guitar, and nail those vocals. Depending on your weapon of choice – or perhaps ‘strategy of choice’ is more accurate – that also holds true for Pixel Jam Band; except here, each of the four act as a means of stopping what appears to be… zombies? Heavy metal, dude.

Like in most other tower defense titles, you’ll be spending currency to place one of four different tower types along a fixed path with the goal of, well, stopping intruders of course. Each of these come with different pros and cons, including additional power, increased rate of fire, an increased stamina cost and more. Figuring out which to use and where to best place these is just the beginning, however.

You’ll also have to decide how to spend aforementioned stamina to determine exactly which part of the track (as in, melody, rather than the visual path) will trigger your towers. Throw in a total of four different towers, with an ever-increasing price tag, on top of that… and you’ll have a lot to manage. Oh, and there’s also an upgrade option of sorts, which lets you spend hearts to bump your defenses up a notch. Hearts which are acquired from laying waste to those that would do you harm, sooner or later reducing your HP to 0, effectively ending the game.

Now, I don’t know if my lack of genre experience is showing, or if Pixel Jam Band is simply a super tricky affair, but I did find myself fighting a steep uphill battle almost immediately; no matter how I had my hastily put together band handle the gig. In spite of that, I’d still recommend taking it for a spin, as it is quite the unique little rhythmic tower defense, and maybe you’ll succeed where I could not? Only one way to find out…

Pixel Jam Band is available from itch.io, without a price tag.

Facebook Twitter LinkedIn Pinterest Tumblr WhatsApp Telegram E-mail
Previous article On Steam, The Week Prior: Quality Over Quantity
Next article 'Hand of Fate 2' Expands Upon the Original With Even More Card-Based CYOA Mayhem