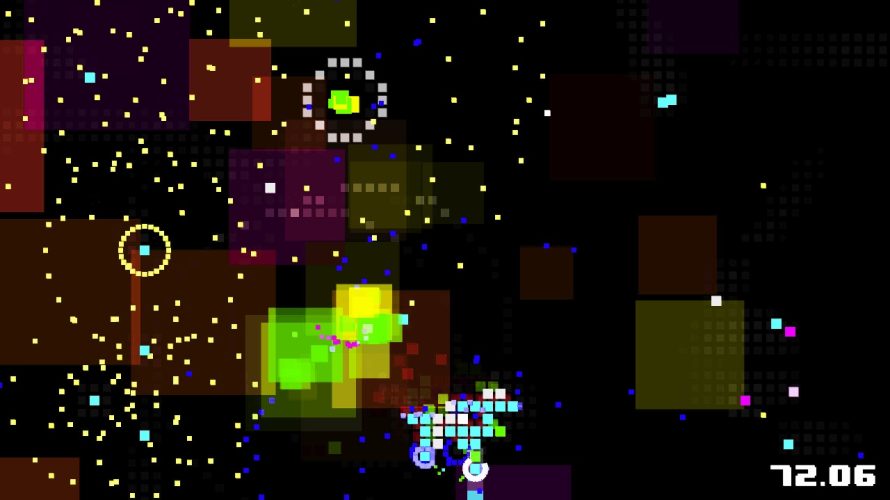 In a Pixel Galaxy far far away, a white pixel is in need of your help. The poor thing has no discernible powers or abilities, at all. Can’t even fire bullets at the enemies it’ll have to face sooner rather than later. So how’s one to deal with that predicament? Simple: latch on to other pixels who CAN deal some damage and… go to town!

Guess there’s something to that old saying about keeping your friends close and your enemies closer, eh? Well, for this particular nameless protagonist, anyway, as it’s the only way to survive the onslaught. Choose your new best friends wisely though, for each ‘addition’ to your arsenal also makes you a bigger target. More firepower won’t do any good, if it’s lost mere seconds later from a shot to the face, after all.

What do you get when you combine the crazy clump-building of Katamari with the tear-your-hair-out twitch action of Super Hexagon, with a dash of Geometry Wars? We’re making Pixel Galaxy to find out.

Aside from knowing who to ‘befriend’ and when, there’s also pattern recognition to manage, as enemy waves (and bosses) have a tendency to move in easily recognizable, well, patterns. Like a bullet hell, only way more… pixellated (get it?). Oh and should the sixth (of six) difficulty level not provide enough challenge, there’s always the Boss Rush mode. That’ll separate the skillful pixels from the rest for sure.

But while that’s all every bit as fun as it sounds (demo), its creator does has ways to go, and as such, is attempting to crowfund the final stretch. Numbers currently read $1,055 of $6,000 with 23 days to go (November 18, 2014), so it’s not like a huge amount is in demand here. Quite the opposite, all things considered, and hey – they’ve even taken to pixeling the budget (above), to answer the classic ‘why Kickstarter?’ question.

While $7 will get you a DRM-free copy of the game, as always, there are noticeably more pricey – and potentially cooler –   tiers. Going as high as $100, for example, means you get to help the team design a wave (or a boss), along with choosing a name for it. Pretty cool stuff, for those with deep pockets.

Now, the goal – pending a successful crowdfunding campaign – is to launch Pixel Galaxy this November or December, on Windows and OS X. Ports to Wii U, PlayStation 4 and Xbox One won’t be a thing until early 2015.

So let’s get Pixel Galaxy kickstarted (and through Greenlight), eh?