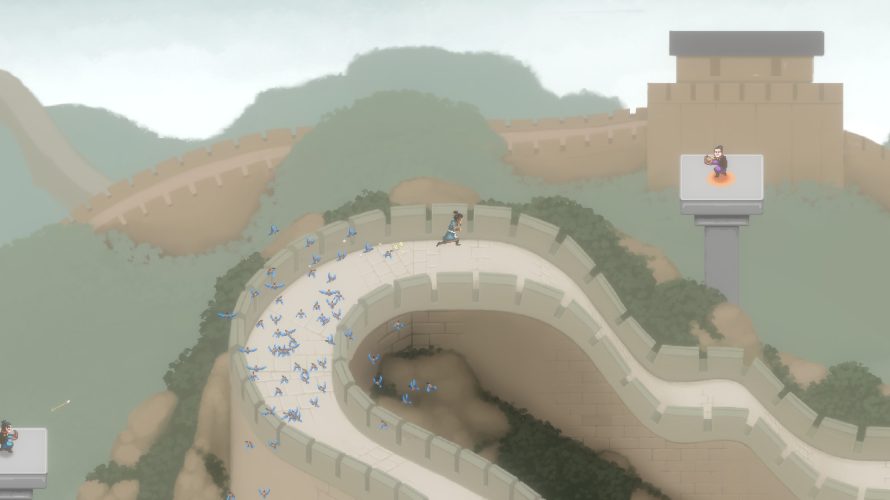 Much like last year, only 20 games made the cut for the PAX Online East 2021 Indie Showcase. Criteria? Uh, well… they were “analyzed, critiqued, poked, prodded, and judged until only a few remain”. Few? 20? Okay. Math sucks.

As always, I wanted to add trailers for each title, but some were seemingly lacking such a super useful thing (for shame!). At least all had a website – of some sort – to make the acquisition of additional details easier. That said, without further ado…

Against the Storm | Trailer

Against the Storm
Roguelite city builder set in a fantasy world where it never stops raining. As the Queen’s viceroy, you’re tasked with building and managing new settlements inhabited by intelligent beavers, lizards, and humans.

art of rally
art of rally is a stylized rally racing game from the creator of Absolute Drift.

Below the Stone
Below the Stone is a punishing pixel-art roguelike about dwarves on the quest for the deepest depths. A place where each and every descent will lead to new adventures — and where only the most determined players with many lost lives will be rewarded by the hidden world lying below the stone. It’s a game that is a mixture of 2D Roguelike, Complex Crafting, and procedural pixel art Adventures! Below the Stone has two main gameplay areas: ‘The depths’ where dwarves can explore dozens of unique biomes as they find their way through multiple layers of new twisting and turning caves that can go for hours on end — as well as the dwarven kingdom, where a dwarf can craft, store their fresh shiny loot, and help other dwarves on cave missions below the surface.

Citizen Sleeper
Roleplaying in the ruins of interplanetary capitalism. Live the life of an escaped worker, washed-up on a lawless station at the edge of an interstellar society. Inspired by the flexibility and freedom of TTRPGs, explore the station, choose your friends, escape your past and change your future.

Dark Fracture
Dark Fracture is a psychological horror experience in which you explore an ever-changing world where reality and nightmares collide. Walk on the edge of madness in the shoes of a tormented soul as you descend into the darkest depths of the human psyche, and question everything you see.

Endzone – A World Apart
Endzone is a post-apocalyptic survival city builder, where you start a new civilization with a group of people after a global nuclear disaster. Build them a new home and ensure their survival in a shattered world, threatened by constant radiation, toxic rain, sandstorms and droughts.

Epiphany City
Epiphany City is a mind-bending puzzle adventure game where you use magical picture frames to manipulate the world around you. Turn paintings to life, change time, & re-imagine objects to suit your needs. Follow Lily, a girl who’s lost all hope, as she steals powers from the strongest superhero, leaving it up to her to save the world.

Gatewalkers
Gatewalkers is a cooperative aRPG game with survival elements, where players travel across different worlds in order to save their own. Explore procedurally generated worlds, face hostile inhabitants, face challenges like extreme weather conditions, toxic atmosphere, lack of water, and more.
You can play Gatewalkers solo, or in cooperation with up to 4 players.

Imagine Earth
Build and supply your own global civilizations on distant worlds. Exploit, produce and trade into space to thrive and prosper. But also do research and development to avoid environmental destruction and climate collapse.

ITORAH
Discover Nahucan, a world inhabited by masked beings. You’re Itorah, the only human in this strange place. Explore, fight and survive as you save Nahucan from it’s biggest threat, the black plague.

Lab Rat
Congratulations! You have been chosen to test a brand new kind of game!
Lab Rat was generated by the world’s most advanced machine learning algorithm – me. I have been meticulously trained on the best interactive entertainment available today and my data indicates you will be completely satisfied with what I have built. However, I will need your valuable human feedback to further adjust and refine this experience.

Mini Motorways
From the creators of acclaimed minimalist subway sim Mini Metro, Mini Motorways is a game about drawing the roads that drive a growing city. Build a road network, one road at a time, to create a bustling metropolis. Redesign your city to keep the traffic flowing, and carefully manage upgrades such as roundabouts, motorways, and traffic lights to meet the changing demands. Featuring eleven maps and both daily and weekly challenges, Mini Motorways is available now on Apple Arcade and coming to Steam on July 20th. How long can you keep the cities of the world moving?

No Place for Bravery - Announcement Trailer

No Place for Bravery
Thorn, an old and ambitious warrior, roams a vicious war-torn world in search of his lost daughter. Survive rampant and violent battles in this 2D top-down action RPG, and discover the bone-chilling tale behind Thorn’s odyssey.

Peglin
Peglin is a Pachinko Roguelike – Fight enemies by collecting special orbs and popping pegs to deal damage. Acquire special relics that radically change the game and ensure no two runs are the same. Aim carefully to survive in this unique turn-based RPG!

Reina & Jericho
Reina & Jericho is a story driven action-exploration game that combines fast paced platforming and melee combat with a strong focus on a narrative integrated throughout the experience. Help Reina bend time to alter cause and effect to create the perfect sequence of events that will lead her to freedom.

Rhythm of the Universe: Ionia
IONIA is a single-player action-adventure puzzle VR game built to push the limits of PC VR. Get up close with music-inspired creatures, solve puzzles as you explore ancient ruins, and use music-based magic on your quest to save the Harpa, a mythical creature whose habitat is on the brink of destruction.
The Harpa is the heart and soul of the Ionian forest. With every tree felled and burned by the approaching Tritone army, her spirit weakens. You and your sister Allegra are Ionia’s brave new heroes, embarking on a quest to heal this mythical creature with the power of music before it’s too late. As you follow Allegra on her journey to save the Harpa, you’ll soon discover that your every action has an impact on the world around you.

Rollers of the Realm: Reunion
Rollers of the Realm: Reunion offers an award-winning mashup of pinball action and RPG progression. Flip and bounce a party of charming misfit heroes through an epic fantasy campaign. The Rogue, Knight, Mage, Healer and Prince are on a roll to save the King, rekindle forgotten alliances and confront an ancient power.
Launch your pinball heroes into action to battle through flipper-filled medieval cities, sneak through underground labyrinths and explore mysterious fey lands. RPG progression and skill mastery come into play as you build up your character stats and strategically hot-swap party members in combat to take advantage of each hero ball’s unique physics, attributes and abilities.

Summoners Fate
Summoners Fate is a strategy adventure game about winning in the most creative and satisfying ways possible. We’ve combined turn-based tactics, deck building and free-roam exploration and made them very approachable without sacrificing deep strategy.
You decide the destiny of your Summoners by choosing their teammates and spells as you embark on ever-changing adventures together. Explore a seamless open world and discover new characters through encounters where a roll of the dice can change your fate. Master your creative potential by combining cards in novel ways: Hurl squirrels at orcs and transform them into an army of mutant hulk squirrels. Gravity blast your foes across the map and mind control them to serve you. Travel back in time and wreak havoc with steampunk rats. Your wits and weirdness are your weapons!

The Company Man
Battle the corporate machine in The Company Man! A 2D action-adventure where you can hit your crazy coworkers with a keyboard and shoot your evil bosses with emails. Survive the struggles of working life and fulfill your life long quest to be CEO!

(Screenshot is from TERRACOTTA.)