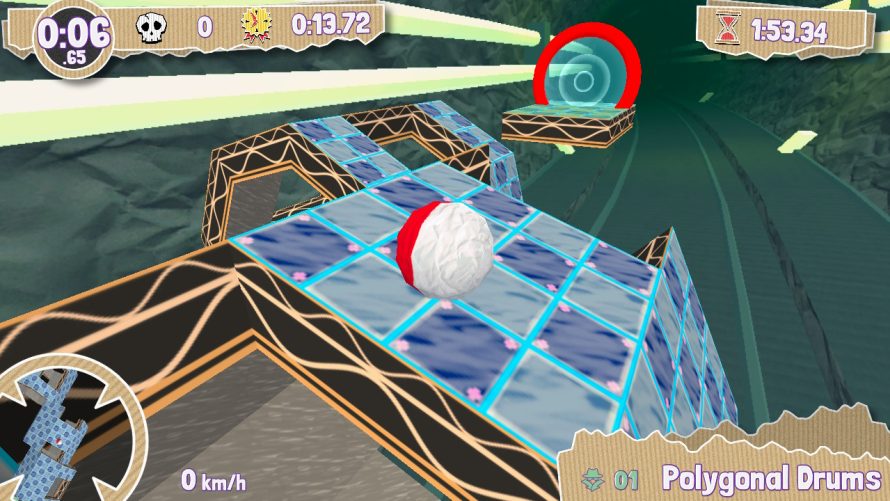 In most games, players will have at least some degree of control over its protagonist, able to guide them across levels directly. That’s also often the case in marble rollers because, well, how else would you… oh right: Super Monkey Ball! World tilting! Of course, and that’s actually exactly how Paperball Deluxe plays – tilt the world to get the ball rolling, navigating tricky terrain and avoiding, you know, falling over the edge and into the abyss. Groovy.

Now, PC gamers might be wondering what the deal is with the ‘Deluxe’ part of the title, seeing how the original was released on Steam as Paperball almost a full year ago. Well, Paperball Deluxe is the base game bundled with all DLC packs, alongside Switch exclusive features and content. This means, on top of the 250 unique stages and 7 game modes this version contains, “new worlds, stages, music and a new announcer character” also made the… papercut (eh?).

Take on challenging stage sets, trying to fall as little as possible, or risk it all to score the best time on any stage. Play any way you want, alone or with a friend.

Oh, and while we’re at it, how about lots of different ways to play Paperball Deluxe? Single and paired Joy-Con, Switch Pro, and GameCube controller, as well as… wait for it… motion controls! Probably not the best way to play for precision, although I suspect it’ll still be a ton of fun to simply flick a Joy-Con around to tilt the level. Who knows, that might end up as a speedrunning category for the game; Super Monkey Ball: Banana Blitz is motion-controlled after all, and people do speedrun that game.

Okay so only a handful of people really do that compared to the GameCube originals, but even so: Paperball Deluxe – motion-controlled or not – is definitely the kind of game that could easily create a competitive community. Fingers crossed.