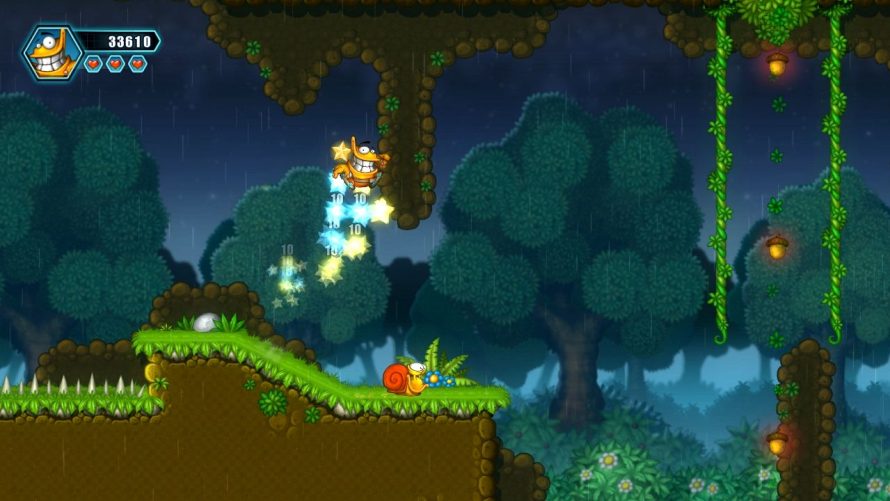 Little did Oozi know when he got out of bed this morning, that today would be a day not quite like any other. What was supposed to be a standard delivery goes horribly wrong, as he crashes on a mysterious planet, sending both his spaceship and suit flying. There are treacherous levels to navigate, monsters to fight, stuff to blow up and more… all to help Oozi get back home.

Compared to the majority of 2D platformers these days, Oozi is a noticeably more streamlined affair. You won’t be roaming the lands in search of character upgrades, new weapons or such. Instead, the game automatically grants you access to new moves as you go along (like wall jumping and ground pounding). While obviously a less time-consuming approach, I did find myself wishing there was more to the game than running and jumping, as that is what you’ll be doing most of the time.

You do also get to blow stuff up, distract local wildlife with food, break rocks, punch things, and dodge security cameras though, all of which helps mix things up somewhat. But for the most part, like in old-school platformers, you’ll be making a mad dash for the level exit, bouncing on enemies and dodging all kinds of hazards (ah, spike pits… such a classic) along the way. 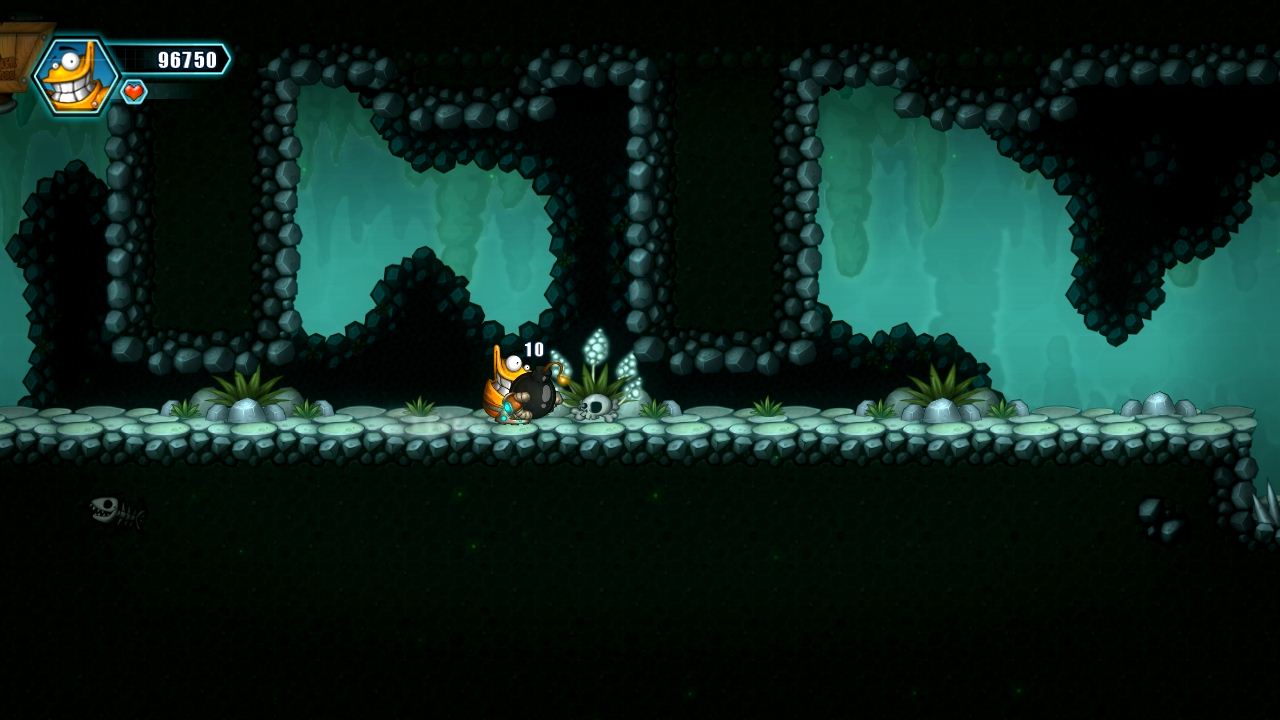 That said, it’s not a strictly linear affair, as there’s plenty of room for exploration in each of the 24 levels. Especially if you want access to the bonus levels, as unlocking these requires you to wander off the beaten path, in search of five secret stars – some of which are rather well hidden.

There are also smaller ones [stars] to grab, although these are purely a score booster, which is definitely less interesting… or is it? Every 2000 points replenish your health after all, and unless you’re playing on ‘kid’ or ‘easy’ difficulty, that’s going to come in handy at some point. See, while everything starts out easy enough, the challenge ramps up significantly as you go along, making every last heart count, even if checkpoints are semi-frequent.

I was actually quite surprised at how much the difficulty setting changes, in Oozi: Earth Adventure. At first, I figured, sure, it’ll start me out with more health, great, but there was much more to it. The number of hazards in each level, boss encounters, and probably other things, were all different, on ‘kid’, ‘easy’, ‘normal’, or ‘hardcore’. What this means is that, in theory, anyone can finish the game, as the lowest makes you invincible, while the latter, well, one hit and you’re dead. Incredibly useful. 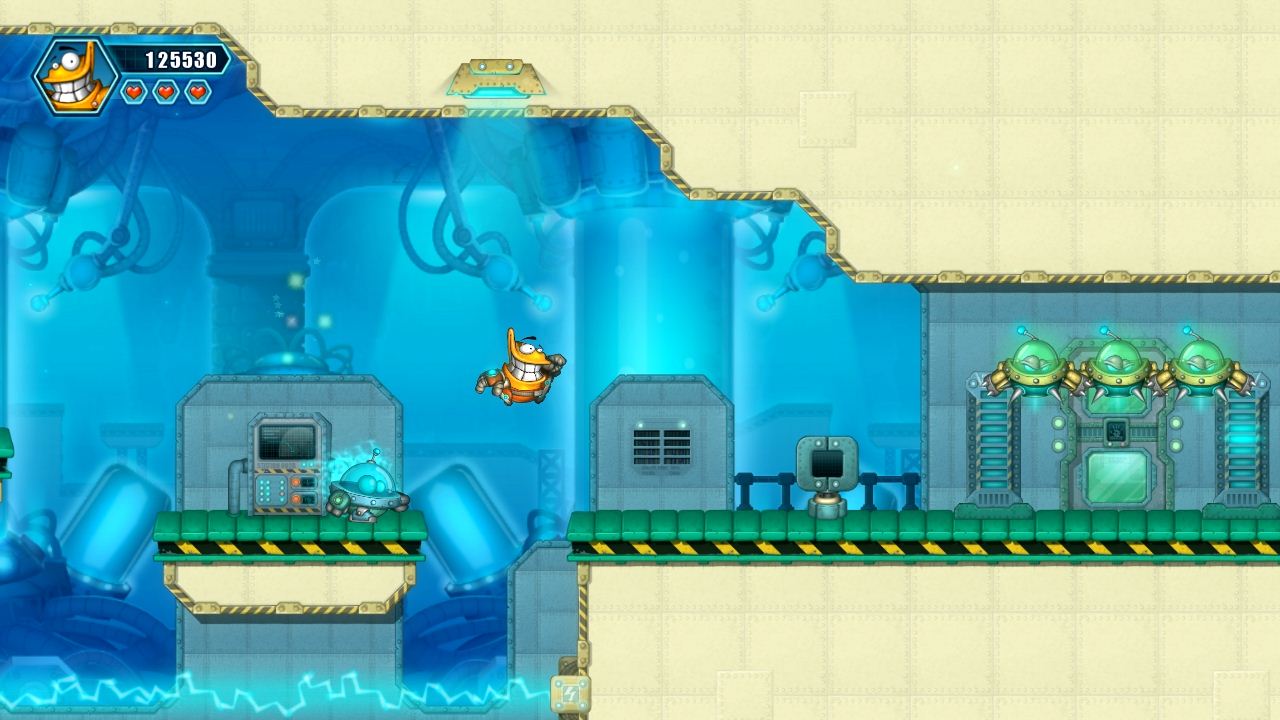 During my playthrough – most of which was on normal – death wasn’t exactly an uncommon occurrence. But since the controls were tight and enemy patterns (kinda) predictable, that could only be blamed on a lack of skill, really. I did eventually prove victorious though, and [spoilers removed]. One thing, in particular, that had me puzzled, was Oozi’s goofy grin. How did he manage to keep it going through all that? Me, I’d have been pissed at the player who caused him to land on spikes or get electrocuted time and time again… but not this guy. Aliens. What a strange bunch!

As I climbed vines, smashed snails, dodged hedgehogs, spike pits, bees, lava monsters, electric… things, water (what? Oozi can’t swim), piranhas and other hazards, much as I hate to admit it, repetition did kick in more than once. Didn’t really help either that, throughout its four worlds, more than a few traps and enemies were simply reskinned versions of previous encounters!

The reason behind this could be that Oozi: Earth Adventure was originally four games on Xbox Live Indie Games, each acting as a sequel of sorts. And since the PC port mashes them all into one game, those unfamiliar with its roots may be confused by this, as in this version, they’re described as ‘worlds’. Doesn’t excuse the somewhat lazy design choice of recycling, but it’s a potential explanation at least. 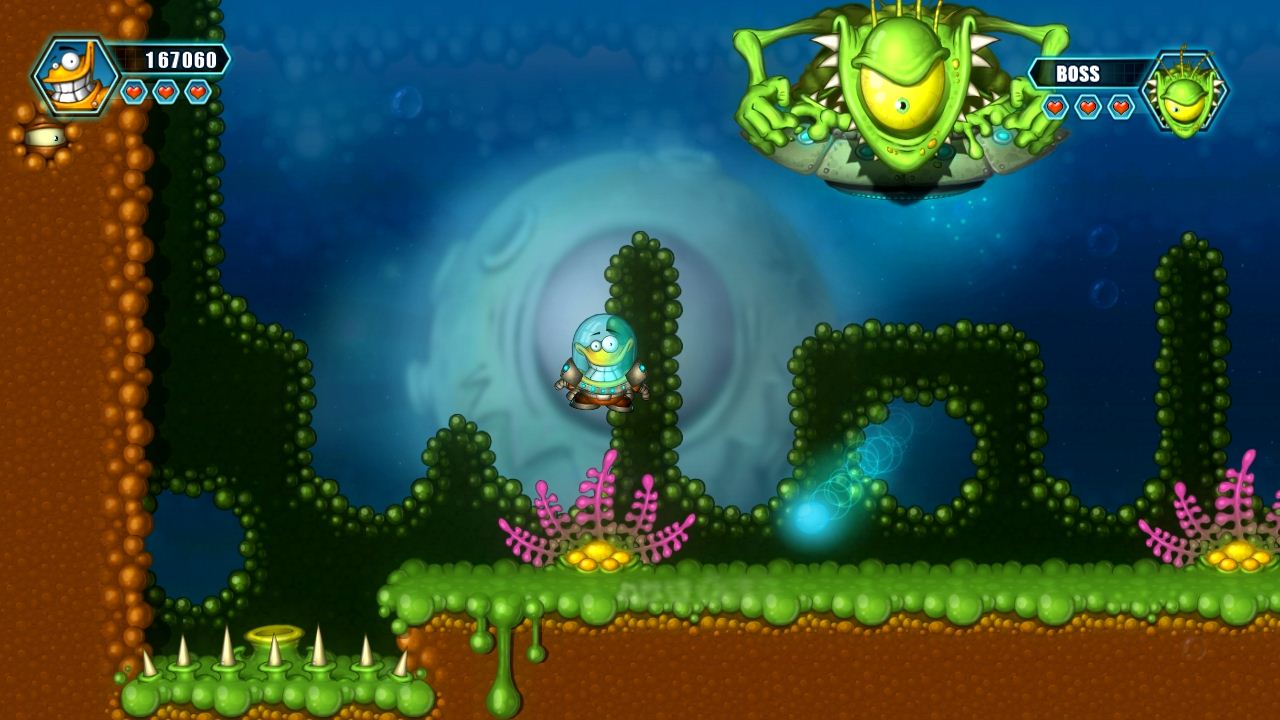 Anyway, back to the game, and… boss battles! These have long since become a genre stable, though in this case, I could certainly have done without them. Not so much because they were overly difficult, but fighting them simply wasn’t exciting. At all. Their weak spots were blatantly obvious, and each attack could be seen coming from a mile away. Old-school by design or not, I kinda expected more, following the interesting levels leading up to each.

Alongside story mode, which is the only one initially available, there’s ‘challenge’, which tasks you with completing various objectives on a time limit, and ‘arcade, where your skills will truly be put to the test. Here, you’re literally racing against the clock through 20 levels, trying to achieve as high a score as possible, to then be granted a rating of up to three stars. It’s not much, especially given the rather brief ‘main course’, but it’s fun while it lasts, and isn’t that what’s important?

In spite of the aforementioned issues, Oozi: Earth Adventure is still a lovely platformer, with its bright and colorful visuals, strange plot and quirky protagonist. I’d say only two things really hold it back: a lack of variety and short length, neither of which are deal breakers. More like, annoyances which can be overlooked in light of an otherwise entertaining experience.