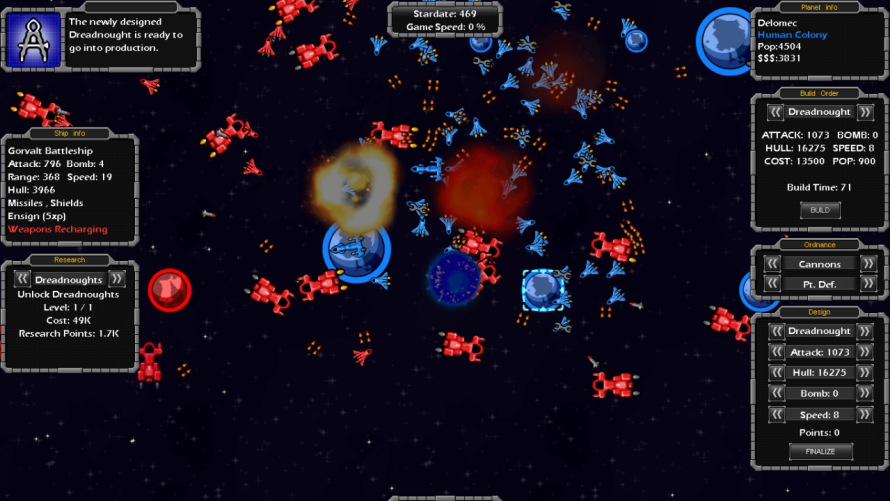 Don’t ya just hate it when even after a thousand years of exploring the vast unknown (ie. outer space), finally reaching the galactic core, someone’s already there and in the middle of a massive war? That’s the case in Not Your Space at least, although unlike most genre entries, this sci-fi RTS actually lets the player disable certain annoyances. You know, like research or… mining, because why not? Quite groovy.

That said, while undeniably interesting, the game is still in alpha, meaning all that could very well change between the demo build and, well, that fancy final version. Just saying. Don’t let that stop you from downloading and taking it for a spin though, as while incomplete, there’s still plenty to do/try. Oh and on the topic of disabling certain ‘features’ -- I do believe diplomacy also made the cut. Or maybe that’s just wishful thinking since I hate politics. That and acting all… diplomatic.

With such a high level of pre-game customization, it doesn’t matter if you have ten minutes for a quick fix or feel like playing a skirmish of epic length, as both (and anything in-between) are entirely possible. Just pick one of the five playable -- and quite different -- races, tick off the right boxes, and you’re ready to rock and roll in outer space. Colonize planets and assault your enemies with a swarm of missiles while researching even more powerful technology (unless you’ve disabled it) to help tilt the odds in your favor. I mean, what could possibly go wrong? As it turns out, quite a bit, seeing how the creator of Not Your Space is hell-bent on crafting a genuinely challenging AI. Awesome? Damn straight.

But there’ll be no crazy customizable intergalactic wars without a successful crowdfunding campaign. Or rather, the game will be less than it could be, as the Kickstarter will allow Bob Saunders -- creator of Not Your Space -- to hire an experienced artist and take a ‘vacation’ of sorts to work on the game full-time.

With 28 days remaining, there’s plenty time left; but the campaign is also only at $777 of $12,000, so it does still have ways to go. All things considered, I’d be very surprised if the goal isn’t reached long before December 11, but time will tell. So let’s get it kickstarted and through Greenlight ahead of its scheduled November 2016 release, eh?