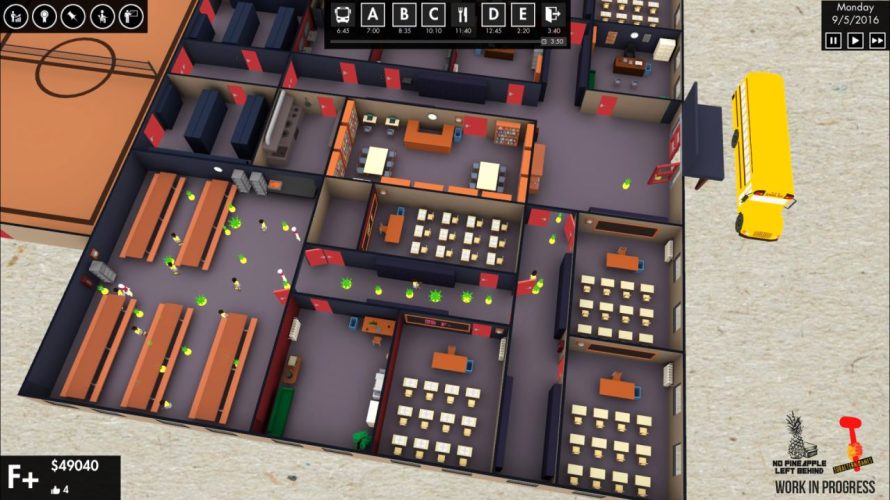 A failed crowdfunding campaign can often result in the termination of a project, but Subaltern Games, creator of No Pineapple Left Behind, will have none of that. In fact, they’ve actually been working on the game in the months following, adding quite a few new features, replacing all the artwork, and… well, something something publisher (wait, what?!).


Now I know what you’re thinking, but no, publishers aren’t evil. Not all of them anyway, and hopefully Mastertronic is among the good guys. Personally, I’d rather that than not having the game come out at all, ya know? Besides – it’s not like they signed up with a big-shot like Microsoft or Ubisoft. Mastertronic is all about independent stuff, or so they claim at least. Time will tell.

We also added CHILDREN to the game. CHILDREN have a zillion different traits and complex social networks–they are total pains in the ass to deal with.

Right. Anyway, new stuff! Good stuff. Interesting stuff. Pineapples! Children! Parents! Lasers! Nope, not kidding. No Pineapple Left Behind has all that – and more – now. Not sure how I feel about teachers being able to utilize lasers as a disciplinary tool, but nevertheless, that’s going to be a thing. Oh and school buses that travel through hyperspace gates. Yup. The game’s already got kids-turned-pineapple (or is it the other way around at this point?), as noted in my Kickstarter coverage, after all, so… why not crank the crazy up even further?

Speaking of crazy, there’ll be an open alpha “in a few months”, which I’d wager is going to be quite a thing; especially since the full version won’t be out until “some time towards the end of the year”.

No Pineapple Left Behind Trailer
Facebook Twitter LinkedIn Pinterest Tumblr WhatsApp Telegram E-mail
Previous article The Greenlight Groove: 'Bleeding Blocks', 'Journey of the Light' and More
Next article 'Of Carrots And Blood' - Rack Up Points by Flinging Carrots at the Mutated Horde