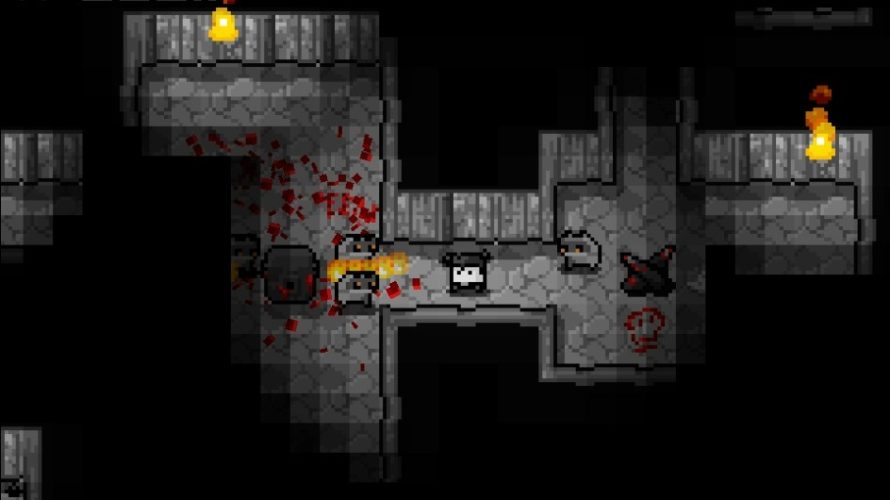 There’s neither gore nor jump scares in No more Bullets, but after navigating its dark corridors for a good bit, the grunts of nearby enemies and chilling atmosphere certainly started getting to me. With no means of defense, all I could do was run, maybe lure some of my relentless pursuers into a trap, make them burn! But eventually, the only thing on my mind was to race for the exit, hoping it would bring safety. It never did.

What, you think that the first paragraph is an exaggeration? Well, I didn’t mention its limited view distance, eerie music or black/white-ish visuals yet, each of which manages to increase the overwhelming feeling of helplessness in this… procedural death labyrinth. Everything’s nice and simple at first though, with but a few monsters giving chase. These are easily dealt with or ignored, at which point you’re pretty much home free. But the odds won’t be in your favor for long, and at some point, you’ll have no choice but to go on the offensive, even if your options for this are incredibly limited.

Once those nasties start grouping up in narrow corridors, well, let’s hope you remember where the nearest ‘burner’ is, and that you’re agile enough to avoid setting yourself on fire. Unless I missed something, there’s seemingly no way to replenish your health in the current version of No more Bullets. No fancy power-ups or hirelings either. Just you and a randomly generated maze full of dangers, with more than a few dead ends. Good stuff!

That said, I did find myself wishing there was more to it upon reaching the seventh day, having experienced nothing new since the fourth or fifth. But alas, beta is beta, and the developer did mention on Twitter that he “might turn it into a full blown game”, so… fingers crossed! Until then, why not point your browser to No more Bullets and find out how far you can make it before the enemies overwhelm ya?