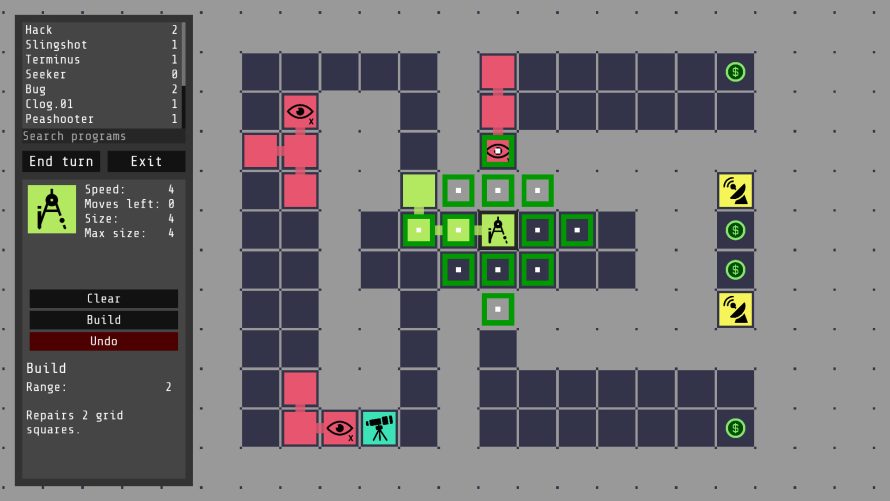 Time to save the world! What? Wait! Don’t go. I promise it’ll be different this time. Unless you’ve already played the part of a freelance “white hat” hacker, fighting rogue software to make money so you can take on greater challenges and… good luck? You’re going to need it, in Nightfall Hacker.

Seriously, the rules may be simple in this turn-based 2D affair with 100+ levels to hack your way through, but that doesn’t mean victories are easily amassed. A lot can and likely will happen between that initial turn and that inevitable ‘how did it end up like this?!’ moment after all, and only skillful play with more than a little planning is going to get you through in one piece. Byte. Bit. I don’t know. Software jokes aren’t my strong suit.

One wrong move and the malicious software wins.

In case you’re wondering why Nightfall Hacker looks ever so slightly familiar but can’t quite place it, Nightfall Hacker is a homage/modern take on the almost twenty-year-old title, The Nightfall Incident. Only this one doesn’t use Adobe Flash, and while I will admit that a lot of great games were made with that, I think it’s safe to say everyone knows by now that Flash wasn’t exactly perfect. For several reasons.

Now, whether Nightfall Hacker will be able to take up the mantle and introduce an entirely new generation to awesome tactical old-school hacking in a proper groovy old-school 2D environment remains to be seen. Based on available screenshots and the trailer (below), I’d say the odds are certainly in its favor. Replayability? Oh right, there’s a built-in level editor and (hopefully) Steam Workshop support. So, who’s ready to… hack the planet?

Nightfall Hacker will be hitting Steam on March 10, 2021.