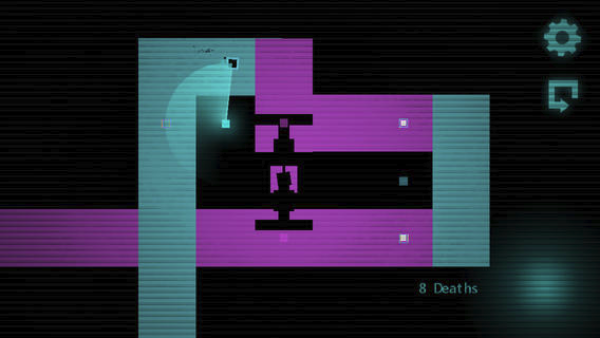 It’s amazing how minimalistic a design one can get away with if the gameplay is clever enough. Magnetized is a great example of exactly that. Its deceptively simple gameplay, controlled by a single button (or touch), makes for an experience that is both addictive and incredibly challenging.

Now, at its core, this is a rather simple game. Easy too… at first. All you have to do is guide a cube through narrow corridors, avoiding any and all collisions. How hard can that be, right? Well, considering the fact that your only means of guidance lies with magnets in fixed locations – quite hard, actually! Suffice to say, inertia and momentum are both your best friends and worst enemies in this one.

Touching the screen will pull the blocky protagonist into the nearest gravitational field (or some such), indicated by a blinking block. But that’s just the beginning. Later, the game goes on quite the mean streak by throwing more craziness into the mix. Enjoy the easy levels while they last, because teleporters, moving obstacles and ridiculously narrow passages all make up the later stages. Easy to learn, so very hard to master.

After a rather bumpy road, which included someone stealing Magnetized and publishing it as their own, the official mobile versions are finally here. I gotta say, with all the cloning, piracy and crap like this, it’s a miracle that honest developers are able to make a living. On a somewhat related note, if you’re not entirely convinced that Rocky Hong‘s creation is worth the admission fee for the iOS and/or Android port, there’s always the free browser version. I’d say something like this is a perfect fit for mobile devices, though.

Magnetized is available for $2.99 from iTunes (universal) and Google Play, while the HTML5 version can be played for free on Kongregate, Newgrounds, Game Jolt and Clay.io.