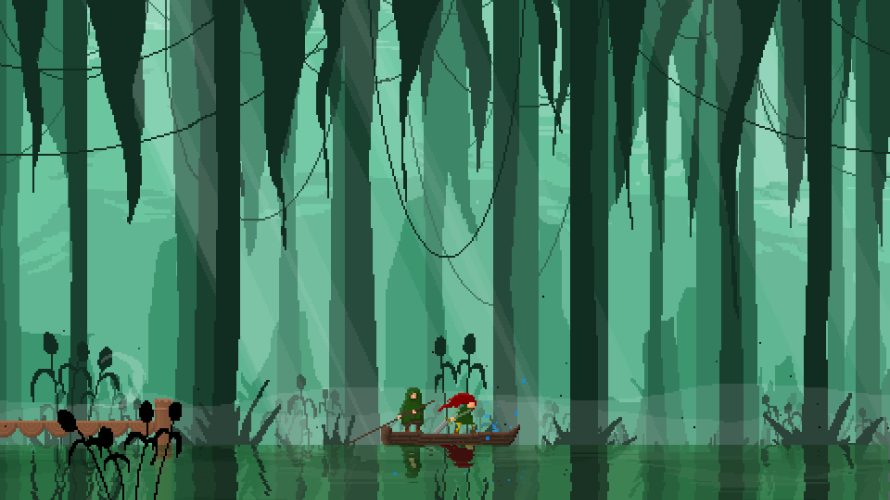 While some may find it difficult to get excited after reading ‘upcoming pixelated 2D metroidvania’ these days, I’d advise against dumping Mable & The Wood in with generic genre entries and moving on. It does seem to have more than a few tricks up its sleeve after all, including how the protagonist acquires new abilities and the fact that you’re not required to kill to reach the end (one of several).

That said, while being able to take on the form of any boss slain is the main thing that caught my eye, there’s much more to it than that. I won’t deny that it is a rather refreshing spin on the metroidvania formula, in which the player normally has to simply locate a power-granting item somewhere in the world. But then there’s the whole ‘choices matter’ thing… because unlike most action titles these days, you can finish this one without laying waste to every living being you come across – or none at all, should you so desire.

The strange cult that resurrected you speak of an ancient prophecy that says you will hunt down the great beasts, take their shape, and use their powers to save this dying world. But what if they’re wrong? The prophecy is old, and words lose their meaning with time…

If you think that sounds more than a little odd, you’re not alone. I wasn’t entirely sure how that would work either, seeing how abilities in exploration-heavy platformers tend to be a requirement for progression, and if no great beast is slain, how is Mable to, you know, go where she couldn’t before? Well, the answer to that is quite simple, and it makes sense too: hidden non-combat routes exist to ensure the viability of a pacifist playstyle, start to finish.

I’d wager opting for this will also lead to a different ending compared to simply going on a slaughter, treating everyone like little more than means to refuel their shapeshifting needs (seeing how the only way to replenish that resource is by killing). It gives the game some replay value too, as there is no way slashing everyone to bits will provide the same experience – on top of sending players down an alternate route – as sparing friend and foe alike. In the entire world. Which is apparently rather large, “each area making up part of a large, complex map”. Well… color me intrigued!