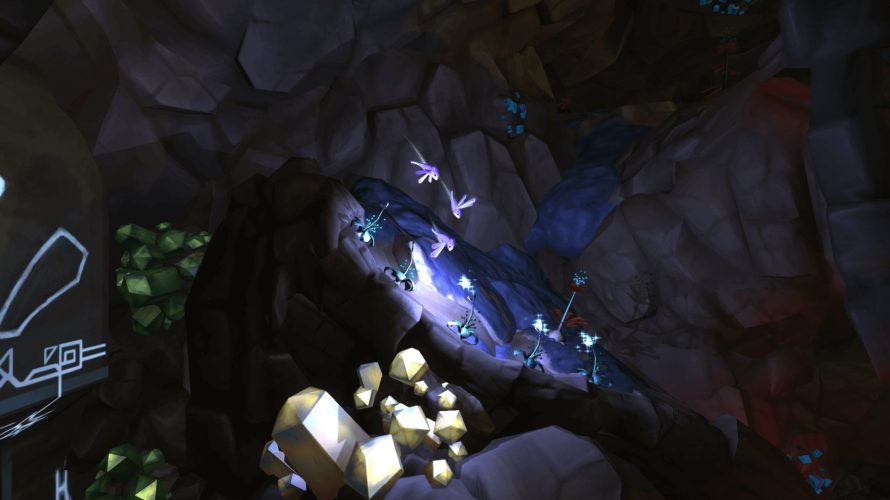 After venturing off to who knows where for thousands of years, the ancient race known as lumini returns to their home world… only to find time has turned it into a rather hostile, uninhabitable place. This simply can not stand, so they take it upon themselves to bring back what once was, determined to restore its former glory, or die trying!

Following a brief introductory cutscene, which is also the only thing even resembling story elements until the credits roll, you’ll be flying/floating around as a group of tiny purple creatures. So very tiny, yet quite agile. Or rather, their blue counterparts, which you’ll acquire upon reaching the first of many blue cubes. Confused? Let’s take it from the top then.

In Lumini, you’re literally in charge of an entire race’s destiny, as these creatures live and die depending on what you do, or don’t. The aforementioned cubes act as checkpoints, but also doubles as a means of acquiring reinforcements; provided you’ve gathered enough energy (the white glowy things on the above screenshot), prior. 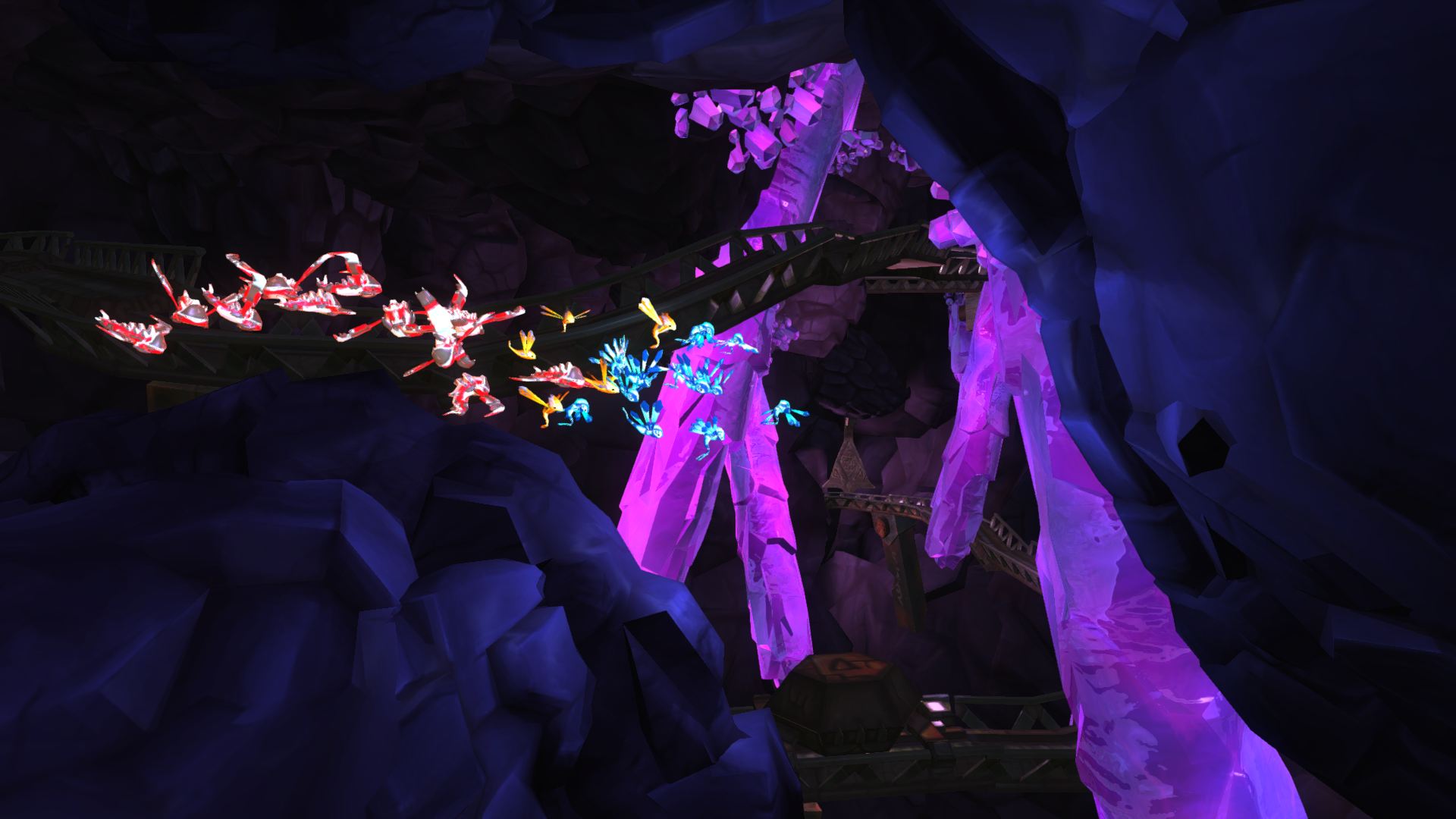 Now, maneuvering the group of lumini is easy enough… until you have to actually do more than simply move around. What I mean by that is, each color – blue, red and yellow – brings a unique ability to the frey, which becomes available depending on which is currently at the front. Blue lets you dash forward, while red acts as a combatant, while yellow, as far as I can tell, is mostly for collecting energy. Could be wrong about that last one though.

Either way, suffice to say, you’ll be swapping between at least two of them frequently, as the environment is anything but friendly, ‘survival of the fittest’ being a definite thing. Everything from nasty looking piranha-style creatures to plants that drop explosives is present and accounted for here, and until you’ve acquired an upgrade for your soldiers, you’re only able to take attackers out of the equation temporarily.

That said, the majority of my journey didn’t really feature much in terms of obstacles, whether they be wheel-spinning puzzles, hostile beings or mutated(?) plants, as I was mostly able to simply drift along casually. Not thereby saying you’ll be able to get through it in one piece without paying attention, however, as your numbers are only so strong (until the next checkpoint), and each hit will take out a lumini! Oh, those poor things. 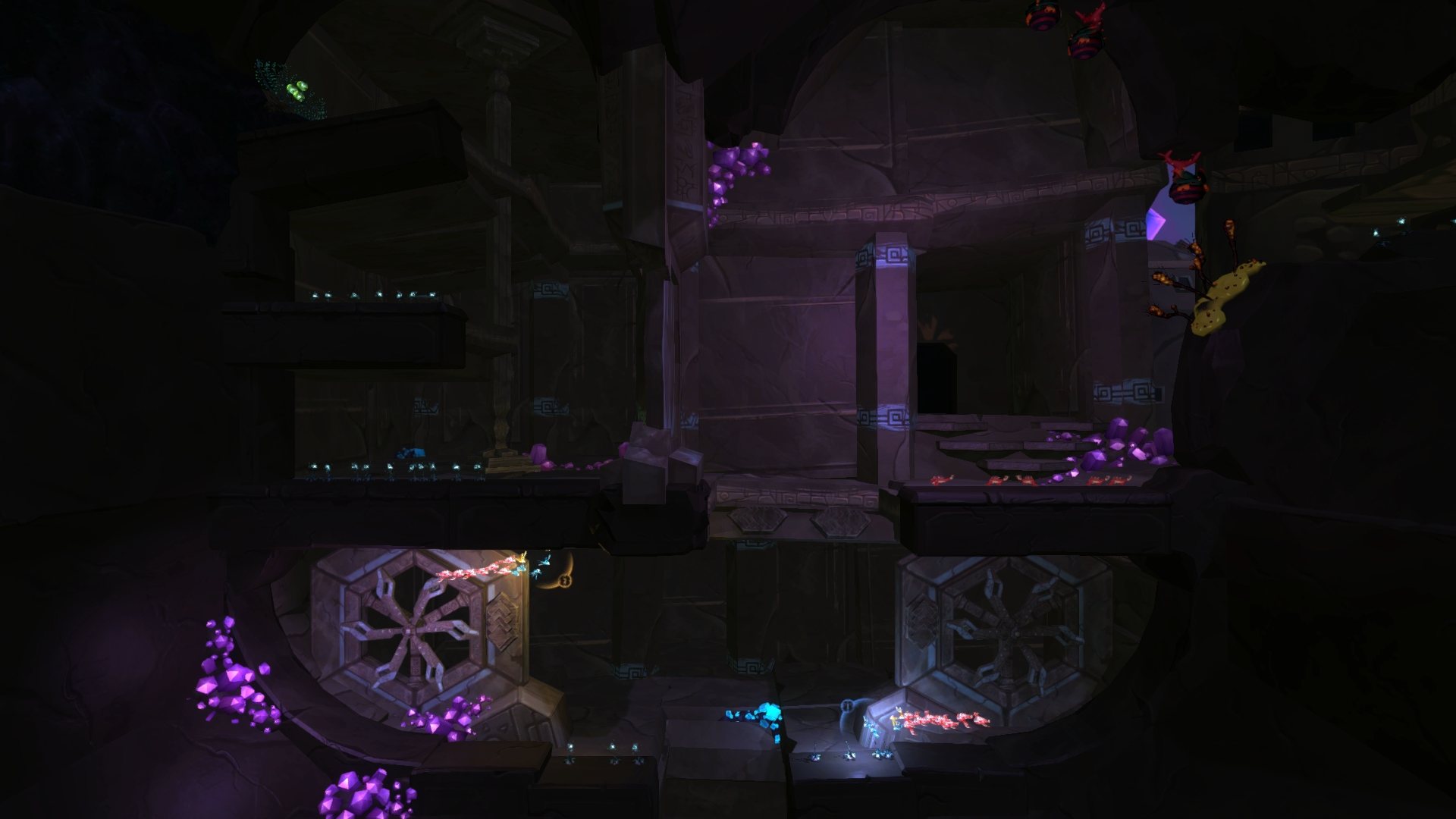 Anyway, as far as figuring out the puzzles goes, I have to say, there really wasn’t much thinking required. Some had you spinning a wheel to build up enough momentum to open a door, while other were more of a ‘pressure plate’ design. Things did get more tricky further down the road though, as the game sometimes required dividing the squadron into two, to then move both simultaneously. Tricky? No, not really, but that’s quite alright, as my favorite aspect by far was to float along, staring at the amazing art without interruptions.

In case you haven’t figured it out yet, Lumini is not a super action-packed adventure full of explosions or a moving story. It’s more about the experience, journeying across a world that’s falling apart, and you’re meant to somehow see that it doesn’t. At least I think that’s the case because as I said earlier, the game is rather light on plot elements. Perhaps a bit too much.

It is however paced nicely, creating an almost zen-like experience. One that, for curious minds, actually features more than a few secrets and alternate paths, leading to all kinds of rewards and unlocks. For starters, models and concept arts can be acquired, as well as lumini upgrades, the latter of which are in fact not placed directly in your path, likely due to the fact that they are by no means required to finish the game. 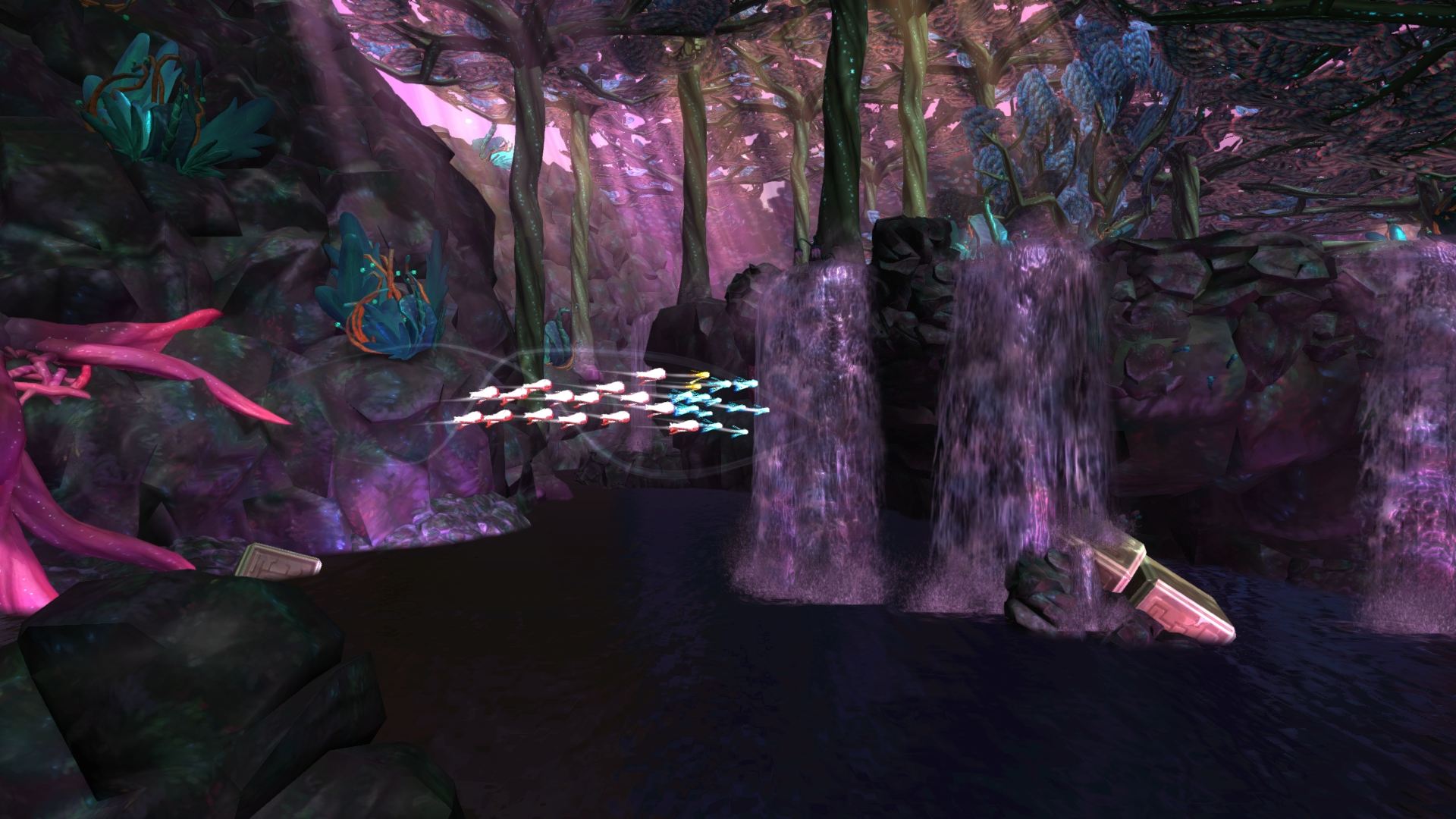 Speaking of which, after finishing the game on normal difficulty, thus unlocking hard, I only stumbled upon one genuine negative, which is… its length. Unless you go exploration crazy, chances are the credits will roll after an hour or so. Not a lot, to say the least, although perhaps it’s for the best, given the type of game? Ie. a compact, relaxing experience, free of artificial padding, instead of one full of dull filler, simply there to extend the duration. Maybe. Hard to tell.

Personally, I found it to be just right though, ending just as I was starting to wonder if they really had more to, well, show. Now, whether or not hard difficulty actually adds anything in terms of story or gameplay, I do not know. This review only covers a playthrough on normal after all, as is the norm. Sure was fun though, and while it’s hardly for everyone, casual gameplay and all, I’d still recommend journeying through Lumini. After all, who knows what you might find while aiding this ancient race in the restoration of their homeworld?