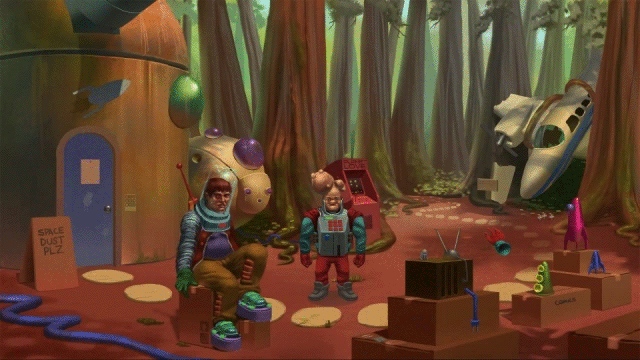 When dealing with accelerated growth experiments, things can go horribly wrong, and in Paradigm’s case, they did. Poor thing is now horribly mutated, tossed aside by his creators, left to fend for himself in a hostile world. Won’t stop him from trying to achieve his dream of becoming the #1 electronic music artist (if his game gets funded, that is).

After more than a year’s hard work, Paradigm (the game, not the character – so confusing!) is in a playable state, with many art assets done and implemented. As such, and because of the whole crowdfunding thing, an alpha demo (Windows only, for now) is readily available. People are usually more willing to throw money at a project that can be sampled, so good on Jacob Janerka (@ParadigmGame) for including that option.

In case you couldn’t tell from the above screenshot, we’re dealing with a surreal point ‘n’ click adventure here, seemingly inspired by the classics of yesteryear; a very good thing in my books! Now, while the game takes place in the year 2026, “dial-up is back in fashion” and… large parts of the world is straight out of the 70/80’s. Confusing? You bet. I just hope Paradigm‘s (the game, this time) dialogue – and everyone else’s, for that matter – resembles those two decades, as that’d pack so much comedic potential. We are after all dealing with a mutated electronic musician wannabe here, so it’s highly unlikely that we’re in for any kind of serious experience. Again, just like ye ol’ genre classics.

I’ve already spent most of my spare time into developing Paradigm, with or without the kickstarter it will be made. Crowdfunding acts to speed up that process considerably, and create the high polish project it deserves to be. Also adding the responsibility to provide you the backer, the best product you deserve.

But enough of that, for there is kickstarting to do! The game will be released mid-2015 on Windows, Mac, Linux, without DRM, if everything goes according to plan. On the financial side of things, its creator is mainly looking to fund additional voice acting and music to complete the experience. Simple as that, really, which is probably why he’s ‘only’ asking for $14,000 (of which more than 50% has already been pledged, at the time of writing). Oh, and the pre-order tier is set at $15.

With 21 days on the clock and an interesting looking project, I have high hopes the funding of this one. Those interested can find its Kickstarter page here, and/or peruse the Paradigm website for more details. Also, what say we get the game through Greenlight? Remember, your vote (and funding/feedback, regarding its crowdfunding campaign) matters!