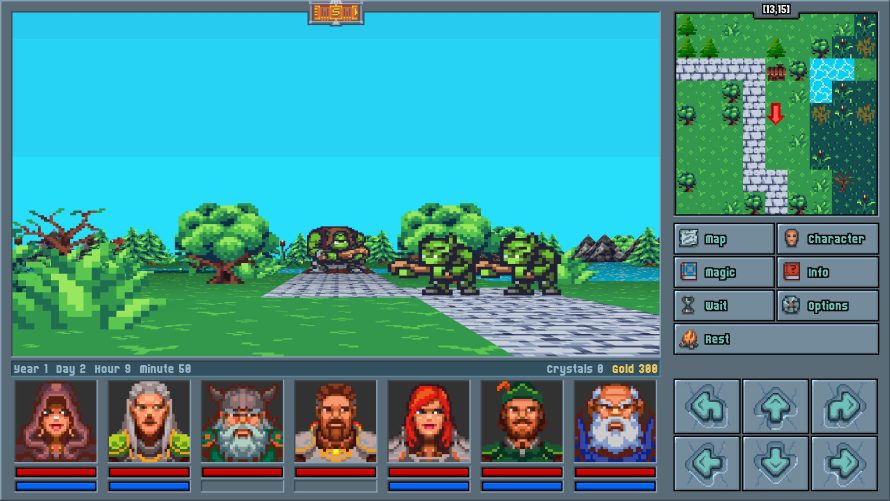 Normally the belongings of a royal family -- in this case, an old crown -- are well-documented and the royal family is well-aware of their existence. Not quite the case with this particular object, although there is a good reason for it: a powerful spell of forgetfulness has been cast, making sure no one remains aware that the crown ever existed. Suffice to say, this needs to be dealt with, the crown recovered, and the origin of the spell discovered. This is where you, and your party of brave adventurers, come into… play. Welcome to Legends of Amberland: The Forgotten Crown.

Now, depending on your fancy for RPGs from several decades ago, you may or may not be familiar with the likes of Eye of the Beholder, Dungeon Master, etc., upon which this most certainly draws inspiration. A case could also be made of more recent genre hits, such as Legend of Grimrock, of course, but whatever the case, what we’ve got here is a grid-based, turn-based old-school first-person RPG. And a darn groovy looking one at that, even if some might find it a tad too, well, pixellated. I certainly don’t.

Assemble your party, either from scratch or with something predefined, and you’re off to the races. Or perhaps more accurately, off to fight the forces of evil in a rather large, non-linear world, one orc and/or dungeon at a time. That said, surely I’m not the only one who finds the party consisting of no less than seven characters a tad unusual, right? Normally it’s either 4 or 6 in games such as this, sometimes 5. Yeah. Strange. Whatever the reason, I doubt it’ll worsen the overall experience, one apparently overflowing with quests and -- in spite of its several-decade-old inspirations -- a few modern features. Like, say, weightless bags, fast travel, and best of all, no grind. What’s not to like, and more importantly, why haven’t you embarked on what’s bound to be a grand adventure in Legends of Amberland: The Forgotten Crown yet?

Legends of Amberland: The Forgotten Crown is available on Steam, carrying a $19.99 price tag.