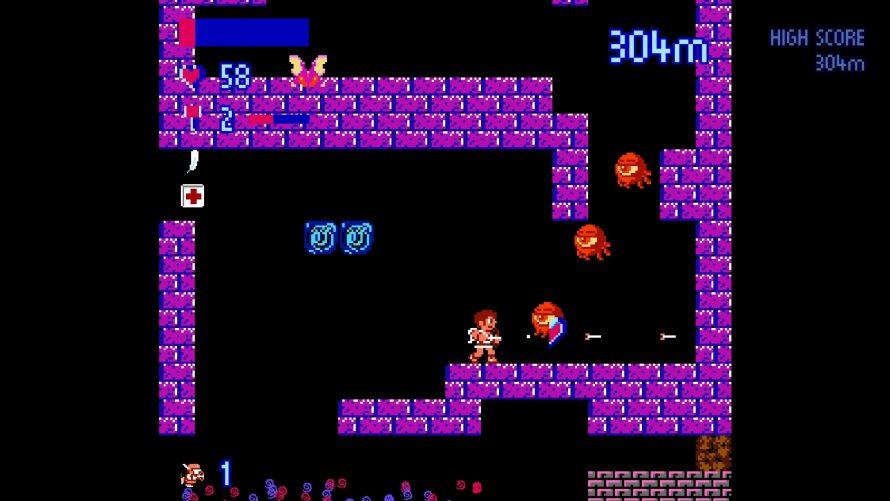 Ah, Kid Icarus. It’s been quite a while since this particular IP last saw a proper groovy 2D entry (2012’s Kid Icarus: Uprising was third-person after all). Too long some might say, and this might be why MatthewRoy created Kid Icarus: Infinite Underworld, a neverending Kid Icarus fan game and a pretty darn good one at that.

Set in the underworld, allegedly the most difficult part of the original Kid Icarus, armed with his trusty hammer and bow, the fabled protagonist must battle the forces of Hell… while climbing ever higher. Speaking of which, I would strongly recommend picking up the pace here, as Orne is rapidly approaching from below (and believe me, you don’t want that… thing… to reach you). So jump, shoot, smash, and be sure to pick up those delicious heart pieces enemies leave behind. They won’t replenish your health, but you’ll still be glad to have as many as possible upon reaching one of the many randomly placed shops in the game.

In fact, stumbling upon one of these is an undeniable blessing, provided you’ve gathered enough currency, things like additional jumps and curse removal being in stock. Not that any of it will matter once a run ends though, nothing carrying over and all. No permanent upgrades or unlockables, but Kid Icarus: Infinite Underworld is still quite the enjoyable nostalgia trip – even for those who, like me, aren’t overly familiar with the original. Oh, and it’s free.

Kid Icarus: Infinite Underworld can be acquired from itch.io.